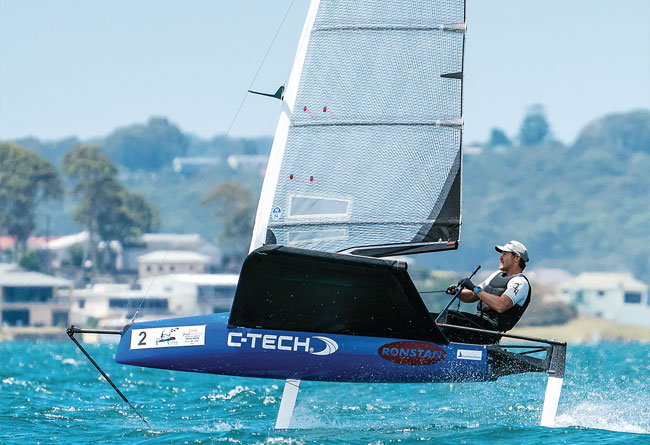 When Alex Vallings set about building composite spars for his skiff two decades ago he had little idea that his efforts would blossom into a specialist facility building custom components for America’s Cup campaigns, superyachts and spacecraft – not to mention 50,000+ spars, battens, tubes, poles and booms. His primary interest in the hot cauldron of skiff racing was in ‘making cool things go fast’ – and 20 years later that goal remains the central philosophy of the company he founded.

In a world where loads are constantly increasing but the competitive edge demands lighter and lighter components, C-Tech have carved a niche in precision composite engineering, taking them to the limits of material properties.

When C-Tech was established it operated out of a farm shed to the west of Auckland. Now its fourth premises is a modern 2,000m2 factory, with a 600m2 world-class temperature-controlled clean room, an autoclave, 10m flatbed plotter and recently installed five-axis CNC cutter. The factory was purposebuilt for C-Tech seven years ago, but already it looks as if further expansion might be required.

‘It really began with making 49er wings and foils for Mackay boats,’ says Vallings. ‘At the same time we were developing spars and hulls for 12ft skiffs. Then in 2002 we started getting into making carbon sail battens. I went to Europe and watched the start of the Volvo Ocean Race and listened to sailors complaining about battens breaking.’

That got him thinking that C-Tech could step up into bigger boat battens, so he worked up a prototype and presented it to Team New Zealand, who were busy preparing for the 2003 America’s Cup defence. ‘After trialling a full set of the C-Tech battens they reckoned ours were lighter and stronger than those they had been using, so they agreed we would become exclusive batten supplier. This was the beginning of the large square-top mainsails and batten technology had to take a big leap forward to support the leeches.’

Alinghi had also tested the new battens, so in the 2003 regatta C-Tech battens were on both sides of the America’s Cup match. For the 2007 Cup cycle all the teams specified C-Tech mainsail battens.

There is much more to battens than meets the eye. At the top end the C-Tech battens are high-tech, hollow and tapered rectangular structures of varying stiffness, individually designed to match the sail’s curvature and chord-depth.

Main picture: Tom Slingsby practising on Sydney Harbour for the 2018 Moth Worlds in Bermuda. Last year in Garda he finished fourth overall in a hyper competitive fleet topped by fellow Laser gold medallist Paul Goodison. Given the skiff flavour of much of the racing in Australia and New Zealand, it is not very surprising that many of the best Moth sailors were very early converts to the C-Tech products – which have continued to evolve as both the boats and the fastest sailing styles have continued to develop

An in-house software program for batten design provides predictions that allow sailmakers to evaluate stiffness, camber and weight before confirming batten specifications. This is particularly important on high-end projects for performance yachts and very large superyachts.

Also widely used on the grand prix circuit, including the Volvo Ocean Race, is the PlateBatten range. These are like a modern version of pultruded battens, but made with a pre-preg autoclaved system, which is much stronger. The C-Tech product has the taper built in on the centreline, rather than ground off afterwards, which eliminates outer skin delamination issues under bending.

In 2007 the AC rule also allowed headsail battens, spurring C-Tech into developing inflatable versions that could withstand the constant bending and abuse inflicted during tacking duels. The Cup projects enabled C-Tech to invest in a new plant to improve their processes, while the kudos of working in the Cup also attracted attention from the superyacht market, where their Air Battens found an application on large furling headsails.

As part of their constant R&D, which is both internally driven and responds to customer demand, C-Tech later came up with a better headsail batten solution with their C-T Flexifurl battens, which comprise two curved composite plates encased in a durable webbing cover. They resist bend up to a certain point and then kink, but spring back. ‘It sounds pretty simple in principle but there are a lot of technical challenges in producing something that rolls up when the sail furls and takes a lot of abuse as the sail goes through tacks. Another challenge is that headstay foils are getting smaller, so the sails have to furl ever tighter. You need to find a balance between stiffness and furlability.’

Although inflatable battens are no longer on the product list the technology has been applied in another superyacht application. Improving on the solid bucket spinnaker snuffer, C-Tech came up with an inflatable ring system: the C-T SnuffAir. The advantages are that, with the snuffer deflated, the huge sails are easier to stow; and when they are hoisted fully inflated the soft structure poses no danger to crew, or to the expensive paintwork of masts, communication domes and so on.

Meanwhile, when the America’s Cup moved to multihulls, C-Tech became even more involved, supplying both Oracle and Alinghi for the 2010 Deed of Gift Match before stepping up a notch for the AC72 cycle in San Francisco, with many of the jib battens and wing components including the control systems and quadrants from C-Tech.

For the AC50s in Bermuda the company’s involvement ramped up yet again, producing complete foil sets for the Emirates Team New Zealand SL33 training catamarans. Work on the AC50s included complex, high-loaded structures such as daggerboard cases, bearings, spine tubes, rudders and foil tips, along with wing control systems, fairings, hydraulic pump boxes, tubes and accumulators – even the bicycle set-ups. ‘They started with aluminium bikes and then, when they were happy with all the positioning and ergonomics, we made up the carbon components.’

C-Tech also drew public acknowledgement from team CEO Grant Dalton for delivering under extreme pressure when things went wrong in Bermuda. ETNZ broke a rudder before the Challenger Series began and the C-Tech crew worked night and day for two weeks to get a replacement out to them in record time.

‘That happened again after their capsize,’ Vallings recalls. ‘There was extensive damage to the fairings and we built another set and also had to replace a cant strut for one of the daggerboards. We worked pretty much non-stop from the Tuesday of the accident. I had a friend who was flying up to Bermuda, so I got him to hand-deliver everything to the team by the Saturday morning in time to go racing again.

‘The work we did with Emirates Team New Zealand has been good for us – it has put us at the leading edge of foil design and technology. We have been able to apply that experience to other projects. For example, we are currently working on lifting dagger foils for a production 10m catamaran.’

Above: still lots of careful hand work involved but C-Tech’s modern 2,000m2 factory is a very long way from where the company started out hand-making sail battens 20 years ago. The facility now includes a 600m2 climate controlled clean room as well as an autoclave (below) large enough to cook foils and components ranging from Moth wands to hydraulic pump boxes and foil cases for Team New Zealand’s America’s Cup-winning AC50s; C-Tech also supplied many of the key elements of the team’s cyclor and wing-control systems 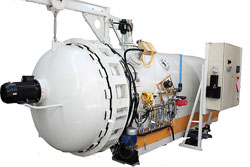 With the 36th America’s Cup moving to C-Tech’s home ground in Auckland, Vallings envisages yet more work ahead. The return to soft sails takes the game right back into C-Tech’s arena of advanced batten technology and sail hardware. ‘The new capacity that will come with our CNC machine will also expand the range of things we can produce.’

All of which is a long way from the origins of C-Tech in high performance dinghies and skiffs. But the company is determined not to stray from its roots. It continues to produce masts, booms, prods, aerofoil hiking wing frames, rudders, dagger boards, wands, battens and components for a wide range of high-performance boats, including the foiling monohull Q23s on Lake Garda, Moths, skiffs (from 12-footers to 18-footers), OK dinghies, Contenders and sport boats. ‘There is always development going on in these classes, some of it involving ultra high-modulus composites,’ says Vallings, who still competes at international level in the 18ft skiff class and this summer won the 12ft skiff Interdominion title.

‘In the Moths we are producing the new bent booms, where the vang loads at purchases of 54:1 are getting up pretty high. We are seeing loads of over 1.3 tonnes on an 11ft boat, which is asking a lot of the materials.

‘More recently we have brought some more experience onboard with Tim Willetts, formerly with Southern Spars and Hall Spars, joining us. He has taken our spar building to a new level, with more refined and better build techniques. With masts we tend to stick to our area of special expertise and focus on dinghies, skiffs and sport boats. Probably 35-footers are as big as we want to go at the moment.’

Although it seems there is a dichotomy between this small boat sailing and the bigger projects, there is in fact considerable crossover. ‘A lot of the people sailing skiffs and Moths, like Tom Slingsby, Paul Goodison, Peter Burling and so on, are also involved in other high level sailing projects. They know about our precision component manufacture, attention to detail and involvement in the latest materials and systems. Innovation is what we are about – and it is also fun.’

With the company’s roots firmly in the marine industry, it is also attracting work in a wider field, including communications and aerospace applications. This has led to developing much larger tubes, up to 1.4m in diameter, and represents a potential market for expansion. ‘At the moment the split is about 75 per cent marine and 25 per cent other projects, but we constantly get all kinds of enquiries,’ notes Vallings.

‘Every time the phone rings it is about some fun project – there are a lot of weird and wonderful ideas out there. It is always exciting and usually firmly within our mission to make cool stuff go fast.’