Meeting of the minds 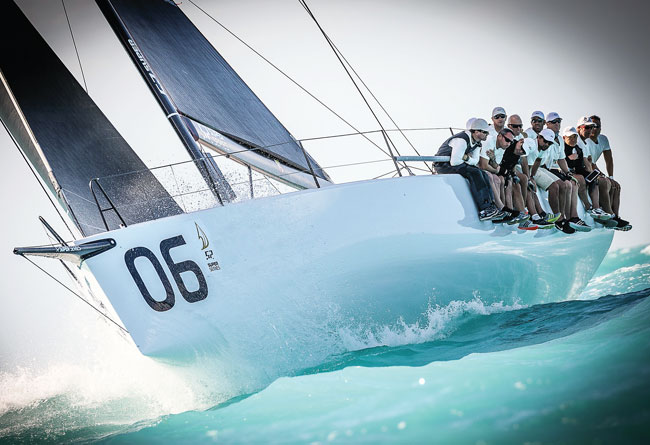 Over the last 12 months sailors have broken new ground and set incredible new performance benchmarks in many different parts of the sport. From the recordbreaking round-the-world endeavours of French heroes such as Thomas Coville, Armel Le Cléac’h and, most recently, François Gabart, to LDV Comanche taking line honours in the 2017 Sydney Hobart in a new record time – the common thread between all these achievements is that North Sails 3Di technology has provided the power behind the headlines.

Aside from the news-grabbing offshore successes, 3Di continues to be first choice for the majority of grand prix inshore campaigns, particularly in the TP52 class, arguably the most competitive of all inshore racing circuits. This year the TP52 is attracting America’s Cup talent such as Sir Ben Ainslie’s Land Rover BAR and Patrizio Bertelli’s Luna Rossa Challenge. More than ever the battle for TP52 glory will come down to a game of inches that demands every last drop of performance from sailors and their equipment.

North Sails responded to the unceasingly high demands of the TP52 class by developing 3Di RAW; the latest iteration of that product is a high-carbon 3Di tape called RAW 880. As technical director of North Materials Bill Pearson explains, ‘For 880 we increased the carbon fibre content by roughly 12 per cent. The additional carbon increases resistance to stretch, meaning a sail holds its shape better both locally in gusts and over time as well.

‘Because the professional TP52 crews are operating at a very high level and look after their sails well they are more than capable of taking care of these sails in the way that the extra carbon content of 880 requires.’

Because RAW 880 is such a solid, low-stretch product the trimmers have been able to adapt their approach. ‘We’ve produced a product that really helps lock in the sail shapes so the trimmers on the boat become much more active,’ says JB Braun, design services director at North Sails and project leader for 3Di.

Main picture: 3Di RAW 880 made its race debut on some of the TP52s at the Key West round of last year’s TP52 Super Series including Takashi Okura’s Botín design Sled (above). 3Di RAW has already proved impressively rigid and ‘foil-like’ to trim while preserving power very efficiently in the puffs; the new RAW 880 construction takes this approach to the next level

‘They are in control of the shapes a lot more. In sail design what the trimmers are trying to do is really defy physics – as a puff comes along the sails load up more and want to become fuller at just the point where the trimmer wants to flatten them out. RAW 880 has given the trimmer better control over the sail shapes as well as a better ability to change gears through the wind range.’

Big steps forward like RAW 880 can only come from combining the vast pool of knowledge and experience that resides in North lofts all around the world. With the company’s designers working on cutting-edge projects from the America’s Cup to the Vendée Globe, and the RC44 and TP52 circuits along with many others, there are always vital lessons to be taken from one sphere of the sport and transferred to another.

In order to accelerate and consolidate this knowledge sharing, North Sails brought together the best of the best to share their latest findings at a round-table discussion forum in Minden, Nevada, at the facility where all the 3Di sails are constructed. Braun says it is a privilege to be part of such a focused group of sail designers all operating at the extreme limits of development. ‘It is a very wideranging discussion where we share expertise and feedback in many different areas of the racing scene, including the established classes like the TP52, RC44 and Maxi72 fleets, as well as emerging classes like the Melges 40 and ClubSwan 50. There are so many fascinating and useful insights from this meeting that I think you can only get from these face-to-face collaborative sessions.’

The two-day agenda for Minden included a deep discussion about the complementary fields of software development and product engineering, two areas where the pace of change remains very rapid. ‘Bringing the best people together like this really does help accelerate the learning curve for all of us,’ says Braun. ‘In many cases it helps validate that you’re already moving in the right direction with your thinking, but of course there are those nuggets that other people bring, with alternative ways of looking at a problem, and it gets you thinking about trying out different ideas when you return to your own projects.’

One thing that modern technology – and the North Sails Design Suite (NDS) in particular – have improved is the speed of designing a new sail. Whereas in the past the development process may have involved a number of sail designs and recuts to work your way towards the optimum shape, the R&D process today is so much more sophisticated that getting to the ideal sail is much quicker.

Bill Pearson: ‘The tools we use today have been developed over the last several decades, and the 3Di manufacturing process is now efficiently integrated into a whole system of design and simulation tools. The North Design Suite takes an order for a new sail and is then able to take the plan of the boat and go all the way through the sail design itself, modelling the sail’s performance against design and construction variants.

‘We are now also able to input the actual material that the sail’s built out of and simulate the deformation of the sail membrane under different load cases in the software, to get an accurate representation of the way the sail will actually set on the water.

‘Then you are able to analyse those shapes and develop a force and moment table that can then run simulations in a velocity prediction programme which you can merge with the hydrodynamic forces. At this point you are in a position to identify an aero-hydro balance where you start understanding the detail trade-offs and what you can do aerodynamically and the resulting effects on performance.

Above: better than any school trip most of us got to go on… Per Andersson (below), recently appointed head of North Sails’ whole 3D operation, here having fun showing off the manufacturing magic he has at his disposal to guests at North’s sophisticated 3D plant in Minden, Nevada, during the company’s international tech-fest. Andersson’s co-host in Minden was grand prix sails head Paul ‘Flipper’ Westlake – more usually found on the mainsheet of one of the world’s top raceboats 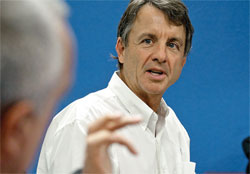 ‘It’s the North Design Suite that makes it possible for that to happen. The tools in the Suite are the individual programs that combine seamlessly to work as one and provide answers to questions of performance as they relate to the aerodynamics, in terms of building, designing and finally trimming sails. The standout aspect of the Suite is this ability of the programs to work in harmony with all the tools integrated into one output, the result of which is an increase in sail performance.’

Aside from his work on more conventional types of racing sailboats, Braun has been heavily involved with Oracle Team USA in recent years including the Bermuda 2017 Cup defence. While the foiling AC50 catamarans of Bermuda might seem a world apart from the more conventional TP52 keelboats, Braun says there is still some useful knowledge transfer. ‘One of the parallels would be trimming to leeway. The TP52 tends to have high levels of leeway because the keels are very high aspect and optimised for low-drag VMG upwind and downwind, and the hulls are also optimised for a delicate balance of power and low drag.

‘The AC50s experienced large amounts of leeway, even more than a TP52, depending on how they were positioned on the racecourse. The varying amounts of leeway drastically affect how you trim the sails. When boats have higher leeway numbers your sheeting angles tend to be narrower and you have to design your sail shapes accordingly. In that sense there are some interesting parallels to be drawn between two types of boat that at first sight appear to have very little in common.’

The leeway example illustrates that though the sail designer appears only interested in what goes on above the surface, Braun says you can only do your job properly when you also understand what’s also going on below the surface. ‘To do the best job aerodynamically as a sail designer you need to know the specifics about the hydrodynamics; and properly understanding the leeway and the performance of the boat then drives you down different directions for the sails themselves.’

Outside the America’s Cup few classes are testing the edges of technology quite like the TP52 fleet. With 10 of the 13 boats on the 2018 circuit set to use 3Di technology it’s going to be another fascinating season of discovery and development for Braun, Pearson and all their colleagues around the world at North Sails.