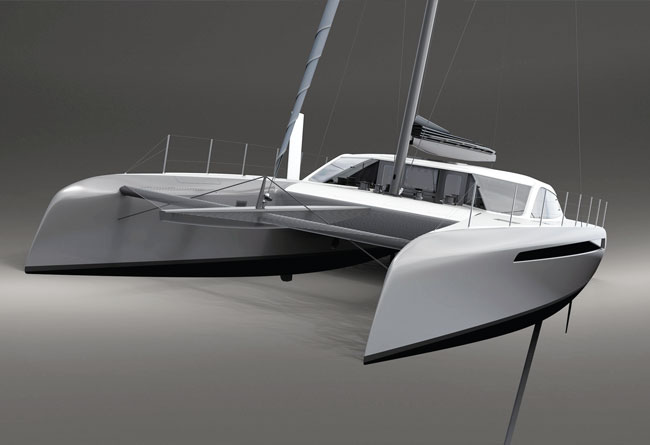 Sailing upwind at a true wind angle (TWA) of 50° in light air, then bearing off and accelerating to 15-16kt, still in no more than 12kt of true wind… These are typical performance prediction figures from the designers of the latest Gunboat and the first of its kind to emerge from its new French builders. And reaching in a good ‘working breeze’, VPLP’s Xavier Guilbaud is confident you will often see 25kt with additional potential to be realised under the big rig option. Not bad for a boat as luxurious as this?

Main picture: Very tangy indeed... the new French designed and built Gunboat 68 further advances the aesthetic and performance development that these large cats kicked off when they first appeared soon after the millennium. The very first Morrelli and Melvin designed Gunboat 62 Tribe marked the beginning of the end in the luxury sector of the market for those giant sailing caravans that were fine for reaching around the Caribbean but ‘unduly’ dependent on Captain Donkey for going in other directions...

The launch of the first Gunboat Tribe 17 years ago marked the invention of a new sailing concept: the long-range high-performance but luxurious, large multihull, a combination only made possible through borrowing the best raceboat technologies and materials.

The original Gunboat catamarans designed by Morrelli and Melvin were light and quite purist in form and with a relatively more minimalistic internal fit-out.

The next-era Gunboats, designed by Nigel Irens and manufactured in China and the USA, were more refined and luxurious, with designer interior and exterior styling and more geared for luxury cruising. The objective with this new French-built Gunboat is to combine the two philosophies and make use of the best qualities of the two earlier generations of boats. Through research with owners and crews of Gunboats over the years, it was determined how people used their boats, from the cruisiest to the raciest. It was important to ensure that the new platform could fit everybody’s interior requirements and that it was versatile enough to satisfy an owner’s need for maximum living space, maximum performance and maximum luxury.

A successful boat has to be realistic in its approach to space, so the pragmatism of the early boats was preserved with easily serviced parts, good system design and use of space, yet with the fresh aesthetic touches the later models acquired; but it was essential the new designs should have no wasted volume or dead spaces.

The new design was entrusted to VPLP who already design Grand Large Yachting’s Outremer 5X. VPLP have race and cruising divisions delivering state-of-the-art solutions from the Ultims Macif and Sodebo to superyachts like the 145ft Hemisphere and popular cruising market designs for Lagoon.

According to Xavier Guilbaud, this 17.8-ton (dry displacement), 20.75m catamaran has benefited from some very advanced hydro and aero studies, similar to those carried out by VPLP for their latest raceboats like Macif. The aero studies were undertaken in conjunction with North Sails’ JB Braun for global VPP simulations, as well as for CFD calculations to investigate different rig and appendage configurations.

‘A key characteristic of a boat like this,’ says Guilbaud, ‘is to be able to achieve top speeds beyond 25kt, but also to cruise comfortably at average speeds of 12-15kt. The challenge is to maintain good performance for the occasional regatta or offshore race without penalising ease of operation in a much gentler sailing mode…

Below: the stand-out Gunboat forward sail handling cockpit and inside helm position remain on the latest design. The Gunboat 68 was the product of a unusually style-driven design (above) process at VPLP – beginning with base influences including the great Bugatti Royale motor car of the 1930s (on the left). It requires enormous confidence (or bluster) for the designer of a powerful, light and fast big multihull to allow style to dictate his design progression – of course being one of the most successful race multihull designers of the modern era allows you to take those risks. The result is stunning…

‘The hull sections below the water are quite narrow, to ensure smooth passage-making, but not so narrow as to create excessive form drag. At rest the transoms are immersed which ensures plenty of dynamic waterline at speed. The trade-off is an excess of drag in light airs, but flotation (and displacement) has been carefully calculated so that the benefits outweigh the disadvantages over 8kt of boatspeed.’

Since the first sketches, beam grew by some 500mm in order to increase righting moment with little performance cost elsewhere. ‘The 68,’ said Guilbaud, ‘will be relatively beamier than previous boats as we wanted to match the performance of the existing turbo fleet but without the need to fly a hull at low numbers.

The choice to increase righting moment is also consistent with a boat that must remain safe when cruising; under the standard 25m carbon rig we do not expect hull flying below 21kt of true wind.

The so-called wave-piercing bows used feature reverse stems, with heavy sheerline chamfers as you move aft towards the bridge deck. This bow treatment helps to save material and therefore weight in the ends of the boat, but also it improves the way the bows recover (bounce up) after being immersed. ‘We also avoided simply moving the volume distribution higher up in the bows to prevent the boat being “stopped” when sailing into a steep wave,’ Guilbaud explains. The fine bows are certainly a striking element of the aesthetics of the boat, suggesting elegance with an attractive hint of ‘edginess’.

Patrick le Quément and Christophe Chedal Anglay played a strong role in defining the overall look and the influence of these two talented designers can be seen throughout, from the cabin windows, with their fine framing, to the curvature of the windshield, the flowing deckhouse and the long tapered smoked glass windows just below the sheer. As le Quément says rather proudly, ‘no straight lines, only curves’.

This project is quite daring in other ways. Rudders on these big cats are always an issue – access to shallow waters is desirable, but not at the expense of safety offshore. Retractable rudders are a hallmark of all Gunboats and on the latest the draft can be reduced to a minimum of 1.2m with the boards up and rudders lifted… close enough to stand on the sand when you step off your boat!

But rather than have the traditional straight blade emerging from a rotating steering drum, which makes for hard spots at the bearing points of the blades, instead Gunboat commissioned Michel Desjoyeaux’s engineers at Mer Forte to come up with a different solution. It involves a triangular support member with a nice plate, which operates with the blade up or down to limit turbulence. It’s a wet area, though, and not watertight.

Two boards are available depending on use. One extends to 3.3m and the other to a maximum of 4m below the keel. The sections are also different – the shorter board is symmetric and the longer is asymmetric with more emphasis on racing performance.

Two rig choices are also offered. In the regatta version the mast stands 4m taller, the boom is 50cm longer, and the longeron extends 1m further forward. In terms of sailplan, flown off the sprit there are an A3 and an A2 plus a smaller fractional J0, which is cut very flat and can be sheeted inside the shrouds for upwind work up to about 10kt true wind. Further aft there is a J1 which is on a furler and set on a detachable cable, plus a permanently set J2 on a furler (headstay) and a J3 which also lives on a detachable cable.

According to Nils Erickson, sales and technical director, who brings over 15 years and 100,000nm of Gunboat experience, the traditional forward trimming cockpit and inside helm position remain, but with the boat wider than previous models the forward cockpit space is increased to allow four winches abreast. ‘On the racecourse more people can work at one time,’ Erickson explains. ‘But it’s not just used as an operating area,’ he says. ‘It’s an entertainment space as well. It’s where a lot of people like to come and watch the sailing and feel more of a part of it.’

For the 68, VPLP worked hard to bring headsail sheeting inboard for better upwind performance (a sheeting angle of just 7° has been achieved). With this step forward the boat’s polars indicate that a tacking angle of 90° will be achievable in most conditions – exceptional for a large cruising multihull.

Gunboats continue to be built using semi-custom techniques. Hulls, bridge and deck are all manufactured in resin-infused carbon/M-Foam. This core has excellent resistance to slamming and can also save weight through reduced resin absorption compared with some other cores. M-Foam can also be thermoformed to tight curves to minimise resin build-up in tight radiuses. The internal structure uses pre-preg carbon/foam throughout. Interior panels and all furniture are pre-preg hot-pressed Nomex-cored.

‘We were offered an opportunity to use robotically applied thin-ply pre-preg technology, which is more common in the aerospace industry (as well as in AC50 wing components). This technology allowed us to take our build tolerances to a new level. Naturally we jumped at that,’ says Gunboat COO William Jelbert (Jelbert previously built Gunboats in China).

‘If there is one area where big weight savings are on offer on these boats it is in the treatment of the interior,’ Jelbert explains. ‘On a boat like this the interior can easily account for four tons, which we have reduced to 2.5 tons with no compromises in terms of either quality or robustness,’ he says.

The furniture in the big cockpit is easily removable for racing, including the ‘galley island’ housing all the domestic appliances This means that in less than a day, a crew can ‘lighten ship’ by 400-500kg before the other usual reductions are made by taking ashore some of the comforts…

Managed carefully with 3D modelling, the interior components, beams, bulkheads and detailing already integrate the various inserts and recesses that may later be required to add options for a future owner. Other options on the Gunboat 68 include a choice of four, five or six cabins, mast rotation or not, all-carbon standing rigging, various aft cockpit entertainment-area configurations and… carbon toilets. How far – and how fast – do you want to go?