Now it’s foot to the floor! 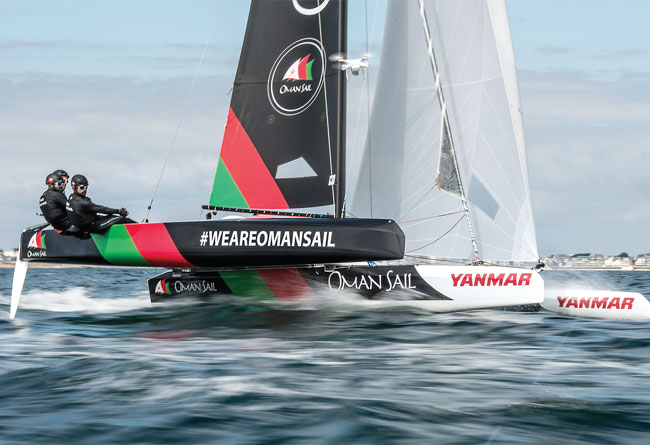 Main picture: A switch to the ‘lively’ Diam 24 tri will bring a whole new complexion to the next EFG Sailing Arabia – The Tour. After being chosen for the Tour Voiles the class is growing steadily with local fleets developing in the UK and elsewhere. The Diam is ‘very’ exciting to sail and the new Tour course is tailor made for the speed and demands of pushing this very light VPLP design hard. This is one hell of a way to spend two weeks of winter... and now for little more than one skiing holiday. You know it makes sense!

After seven years of growing recognition EFG Sailing Arabia – The Tour just took a huge step up. Organiser Oman Sail has announced an all-new look for the region’s leading racing event, with a switch to the high-performance Diam 24 multihull, and a new course that will explore the length of Oman’s striking coastline.

Add in Oman Sail’s newly extended offers of turnkey entry packages – ashore and afloat – and it’s an event that’s clearly going up a gear. Racing starts on 3 February and concludes on the 17th.

A Gulf fixture since 2011, EFG Sailing Arabia – The Tour needs little introduction, offering top proam racing with a mix of in-port and coastal courses. The reboot will offer more of the same magic winter mix with the addition of challenging coastal raids and eight new venues.

But for the racers it is the change from the Farr 30 to the Diam 24 tri that will grab most of the attention. Very fast, straightforward to assemble and sail (did we say very, very fast), the lightweight VPLP one-design tri has proved popular among pro sailors and recreational racers alike with growing fleets and dedicated events including, of course, the Tour de France à la Voile, where it was an instant hit.

As a one-design tri that rewards preparation, teamwork and race skills, plus occasionally a little bravery to push that bit harder, it’s anticipated the step-up in performance of the 2018 Tour fleet will appeal to a new group of international racers to add to returning fans of the event.

For those kicking their heels through the long northern winter, the Caribbean has, of course, been the default setting for those averse to frostbite options. With Key West Race Week off the calendar for now, other alternatives might have seemed limited.

Might is the operative word here, as the ‘Tour’, particularly in its new format, has earned the right to serious consideration by those seeking something warmer in February (mid-20s in Oman before you ask).

For its part, Oman Sail is now a well-established and familiar presence in the racing world, with teams competing across a wide variety of international events. Its competence in organising marquee events in the Sultanate has been seen at the Louis Vuitton America's Cup World Series and the Extreme Sailing Series, as well as recent Laser, Laser Radial and RSX World Championships (and that is just the sailing, they also organise the Al Mouj Muscat Marathon).

For all that, EFG Sailing Arabia – The Tour may still seem a bit left field, even for a team looking for something a little different in unfamiliar – if spectacular – waters. Oman Sail has been a pioneer in a number of respects – not least reconnecting Omanis, including many women, with their maritime past – and is keen to present the challenge of The Tour to as many prospective racers from as many different countries as possible.

With that in mind, for the new-look event Oman Sail is offering a new turnkey package par excellence which extends not only to the race team, the race yacht and technical support, but to family, friends, team supporters and sponsors. The whole event package costs €22,000, with a 25 per cent discount for the first four teams to sign up – so an early-bird rate of €16,500.

One boat, one cheque, one spraytop (each)
Included in the one-off fee is free return shipping of a Diam 24 and equipment between Port La Forêt, France, and Oman; all the transport costs (and logistics) of moving the boats between venues once in the Sultanate; the entry fee for three sailors; and their accommodation and catering for the full 15 days of the event; as well as crew and luggage transport between venues and event hotels, including flights.

Find a boat, pay the one-off fee between you, then it’s a spraytop, sandwiches, water and bananas (it’s a bit hot for chocolate).

Also included is Yellow Brick tracking, the loan of a mandatory race gennaker, and safety equipment (but not navigation kit). Repair of in-warranty equipment and other technical support are part of the package. A full media package, including a video and digital photo portfolio, is provided free to all competitors.

Further team members and crew can be added for ⇔2,250 each for the full 15-day package, and those wanting to charter a Diam from Oman Sail can do so for ⇔6,000 on a first-come first-served basis.

And for those staying dry
Oman Sail will also arrange hotel deals at all the locations for non-sailors and shore crew, as well as family, who are invited to travel with the organisers between venues. RIBs are supplied free at the in-port race venues. Oman Sail will connect family and friends with local tour agencies so they get the most out of the whole Tour experience and also offers a bespoke sponsor package, up to and including managing an entire PR, communications, client and VIP programme if required. This package has proved very popular with many amateur entries such as Renato Azara who saw his Sardinia-based Adelasia di Torres team take fifth on their EFG Sailing Arabia – The Tour debut in 2017. The MD of the Emerald Coast-based crew and yacht management agency Sardinia Yacht Services, Azara said: ‘For me the biggest reason to do it is that it is in February! And that is a good time to get away from Europe… Everything is organised and I love it. There are plenty of people who are prepared to spend money on going sailing, and they should consider this opportunity.

‘It’s so easy, literally, you just turn up and race around some of the most spectacular coastline on the planet. Local culture, cuisine… it’s just as much fun for those travelling with you as it is for us.’

Azara bolstered his largely amateur crew with some pro experience in the form of Caterina Nitto and Duccio Colombi, but others stay with their regular Corinthian teams. The Swiss Bienne Voile team, for example, have done all three events since 2015 with a rotating team of amateurs more used to lake sailing at Neuchâtel (plus a few Fastnets and Tour de France à la Voile along the way!). Previous editions have seen student crews from Plymouth and the Netherlands, mixed and all-women teams and, of course, Omani sailors going through the Oman Sail project. For 2018 several crews from the Oman region are anticipated; plus with the use of the Diam 24 interest is expected to grow sharply from European multihull racers including crews practising ahead of the 2018 Tour Voile.

‘A big draw of EFG Sailing Arabia – The Tour is that it offers something remarkable to both amateur and professional sailors,’ said Salma Al Hashmi of Oman Sail. ‘Now we’re adding high-speed racing on the Diam 24s with the chance to explore the breathtaking beauty of Oman in depth.

‘At the same time we have made it even easier to come here and experience what our sailing waters offer. Our turnkey operation means sailors can turn up and go racing – it is all laid on and we will provide everything they need.’

The 2018 edition of The Tour will feature eight venues, three offshore legs, three coastal raids and four in-port races. It starts with the first in-port race in Salalah, Oman’s second biggest city and a large sea port, followed by a coastal raid to Mirbat and back. In-port racing and a coastal raid will also be held at the next venue of Duqm. Next is an offshore leg from Barr Al Hikman to Masirah, with a further coastal raid.

Some course, some regatta. Blasting round Oman in warm water and good breeze with every pit stop offering a different local experience. Sound a bit like a travel guide, well to be honest if you want an all-consuming regatta where your ‘shore team’ are as well looked after as the sailing team and where they will go home not grumbling for a change, about cold regatta tents and hanging around in the rain, then treat them if not yourself! Afterwards you will then be able to drag them off to that winter training regatta with a straight face 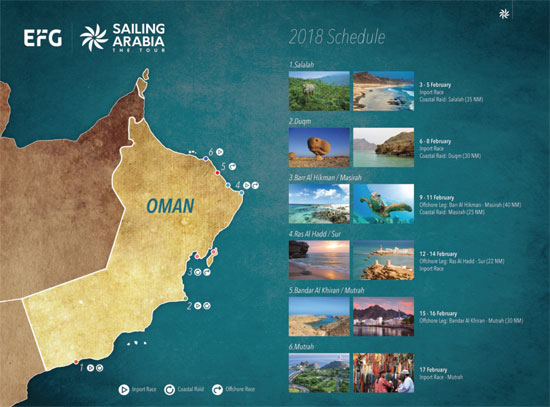 The second offshore leg is between the serene village of Ras Al Hadd and the ancient port of Sur, a trade centre since the sixth century. After an in-port race in Sur, the fleet relocates to the Bandar Al Khiran, known for its tidal bays and seclusion, for the final offshore leg to Mutrah, near Muscat. The port town, famous for its suq, is the venue for the concluding in-port race event of the Tour.

And then there is three-time winner Sidney Gavignet, whose enthusiasm for the Tour remains infectious: ‘I would recommend it to anyone looking for something a little different. People come back with fantastic memories having had some great racing… and the scenery is pretty fantastic.

‘It has the same spirit as the Tour de France à la Voile, a mix of top professional sailors and some of the best Corinthians, with good racing at every level.

‘Above all, it is now such an easy and simple package – find yourself a Diam 24 tri and pretty much everything else is arranged by Oman Sail. Everything.’