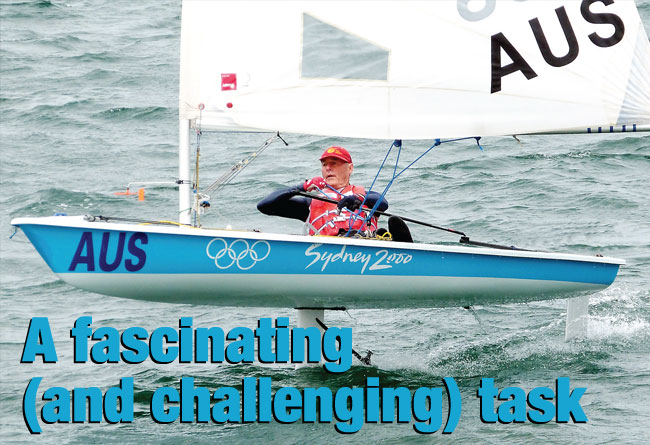 Based on his experience designing, building and sailing over 20 different Moth designs since 1970, Ian Ward developed a keen interest in foiling, which began in 1996 when he was given the chance to sail a Hobie Trifoiler. When it exhibited incre - d ible performance in a breeze, he thought, ‘How much better could it be if it were much lighter, simpler and even faster’!

His first ‘trifoiler’-style foiling Moth was built in 1996 and modified further until 1998 when, inspired by Rich Millers’ foiling sailboard, he was struck by a thought… ‘what if it were possible to foil a Moth on just the centreboard and rudder foils alone?’

The benefits of heeling to windward for increased righting moment, and the reduced drag from fewer foils in the water were immediately obvious. What was not clear was how to make it work and if the Moth would even be sailable as it appeared to be an impossible balancing act.

Ward built the first ‘modern’ foiling Moth in 1998 using centreline foils and proved it could be done in November 1999. It was later on that John Ilett independently developed his own design in Perth, which has now become the basis of the modern foiling Moth.