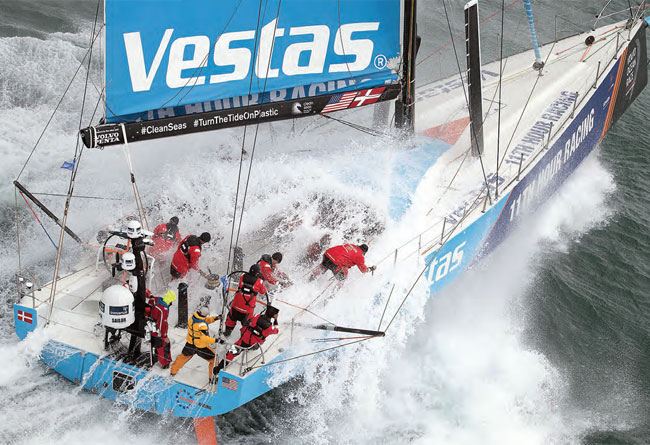 Crews in the first Whitbread in 1973 pretty much stayed wet from start to finish. But thanks to continuous innovation things are rather better now…

Few people have been involved in the Volvo Ocean Race for as long as Bouwe Bekking who, as the skipper of Team Brunel, is about to embark on his eighth campaign in one of the world’s toughest offshore contests. Bekking knows where his priorities lie and somehow maintaining the condition of his crew in such a long and fatiguing event is probably the most important priority of them all. Hence one thing that Bekking will never mess around with is clothing. Team Brunel is one of three entries this year to have adopted Musto as their clothing supplier.

Main picture: It was Volvo Ocean Race first-timer Paul Cayard who coined the phrase firehose to describe the force and velocity with which water punished his crew sailing downwind at speed – and that was onboard his race-winning Volvo 60 EF Language; the VO60s were relatively pedestrian compared with both the VO70s that followed them and today’s VO65s

Since Bekking first competed in his first then Whitbread Round the World Race onboard Philipps Innovator in the 1985-1986 event the boats have only become steadily faster. Back in the mid- 1980s no one had even conceived of a large keelboat that could lift out of displacement mode and on to the plane. Life onboard was a good deal more comfortable – or rather less uncomfortable – back then, and although the pace of the race was not exactly sedate, it wasn’t as ‘by-the-moment’ as it has become today.

‘The boats have become more physical, way faster and therefore also much wetter,’ says Bekking of the VO65s used today. ‘Over the years Musto has done a great job developing foul-weather gear for us that is breathable and flexible, allowing you to do your job using minimum energy and keeping you dry at the same time.’ Musto is already in talks with the Volvo Ocean Race organisers for the next edition that is now expected to take place in about four years’ time.

Forty years of feedback
Musto has been with the Volvo Ocean Race pretty much since it began, back in 1973, working closely with the sailors to put their real-life experiences into the next iteration of the company’s offshore kit. Design manager of sailing at Musto, Shane Rhone, says there is no substitute for this kind of direct, honest feedback.

‘If your kit doesn’t deliver what these sailors want, they will tell you about it,’ he says, adding that one of the most forthright sailors in this respect is Ian Walker, winning skipper of the last round-the-world race with Abu Dhabi Ocean Racing. ‘Listening to feedback from people like Ian is not always easy at the time,’ Rhone admits, ‘but it’s what enables us to ensure that the next evolution of our clothing delivers to the highest expectations in the most extreme conditions.’

At the end of the last Volvo race Rhone and his team set about completely redesigning the company’s top-of-the-range HPX line. ‘The previous HPX smock was made up of 12 panels but in 2016 we managed to reduce that to four panels stripping out 200g of weight as we did so. Every element that you can reduce or eliminate always saves weight somewhere.

‘For example, taking out a seam reduces factory processes, decreases seam tape consumption and makes a garment more durable. Seams are the weakest points on a performance garment, in regards to design it’s a definite case of “less is more”. Every little bit of weight adds up at the same time as improving durability.

‘Almost everything we’ve changed this time is prompted by feedback from the sailors in the last Volvo,’ he says. ‘For example, we had a bowman regularly ripping holes in his smock pockets because of tools and other sharp objects put in there. So now every pocket on an HPX garment is fully lined in Cordura, the same as in knee panels.

‘There are other things like the internal hem adjusters, where we’d always used the typical round hem adjuster. The Goretex fabric around that was literally rubbing through, it was making a hole inside the fabric so we changed that to a flat cordlock and that eliminated the problem immediately.

‘Some people were saying the internal stormguard was chafing their chin. So angling the shape to a really soft curve solved this chafe problem. It’s those tiny things that make the difference to the whole.’

If those changes do sound like tiny differences, then remember that in the last race some of the ocean legs were decided by a matter of a few minutes or even seconds at the finish. Today, more than ever, every little helps.

Man or machine?
Some manufacturers of offshore clothing are attempting to replicate the real-life rigours of ocean racing through machine testing of their fabrics and garments. This is an important part of the testing process, certainly, but Rhone says machines only tell you part of the story. ‘You can do all kinds of testing in a machine in lab conditions, but it doesn’t pick up on the kind of detail you get from sailors who have been at sea for a month.’ 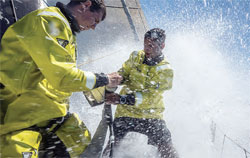 Above: Musto clothes are being worn by three of the entries in the 2017/18 Volvo Ocean Race, notably including the Brunel crew. Why notably… well, Brunel skipper Bouwe Bekking is on his eighth round the world race so should know a thing or two about what makes for the right clothing for this event. Remember too that the Volvo course now involves repeated crossings of the Equator so it is not only about keeping out the green water coming on deck; it’s also about having waterproof clothing that is breathable enough for the tropics. Another reason that Brunel is a useful endorsement for a clothing supplier… Bekking is famously obsessed with keeping his own feet warm and dry!

Ian Walker has now stepped away from a long racing career to become racing director at the Royal Yachting Association, but he’ll be following this next edition of the Volvo closely. ‘I wouldn’t want to start the race in kit I hadn’t tested myself sufficiently, which means you’ve got to sail a three or fourweek leg in a range of conditions.

‘There’s a big difference between lab conditions and what it’s actually like on the water. I try to control the controllables, and clothing is very controllable. You just go with what you know works perfectly.’

Walker has worked with a number of garment manufacturers over the years but feels that for him Musto has perhaps been the most focused on development and evolution of the relevant products. ‘I think that’s one of their main motivations for being involved at the top level,’ he adds.

The feeling within Musto themselves is that if the latest HPX kit will last a professional racer for the duration of a Volvo Ocean Race, it will most likely give a Corinthian offshore sailor as much as 11 or 12 seasons of reliable usage.

The best of both worlds
Designing offshore kit is always a compromise between weight, mobility, comfort, waterproofness, durability and reliability. You can’t have everything in one garment. Well actually, according to Rhone, that is no longer necessarily the case. ‘When sailors are used to a certain weight of clothing, when we then come out with the next evolution and it feels lighter and more flexible, they take some convincing that it’s as least as waterproof and durable as what they had before,’ he says.

‘We saw this with our MPX Race Lite range in 2016, when we reduced the weight by 15 to 20 per cent; we had sailors telling us they didn’t see how it could be as durable as the offshore fabric.

‘The problem with sailing is there’s a mentality that if it’s too light it’s not going to be reliable. There’s a feeling that they’ll snag it and it will rip, that it won’t last. The reality is that you have to use it for a while before you can trust it to do what we claim it’s going to do.

‘Another example, if you go back five years, everything was lined with a standard flat face fleece, whereas any sports brand now employs a grid fleece. Like for like you can use a lighter fleece that will give you a greater warmth-to-weight ratio. The grid is where they’ve removed fleece, yet now more of your body heat stays trapped to keep you warmer.

‘When we updated our Goretex mid-layer with a grid fleece lining a lot of people complained because they said it felt too light. But over time people have realised you can have something that is lighter and warmer – now all the fleece-lined pockets in our garments also use microgrid fleece.’

Faster, higher, wetter
While this edition of the Volvo race will see the world’s best offshore sailors using an evolution of what they were wearing three years ago, Rhone and his team are preparing themselves for revolution.

The radical foil-assisted boats expected in the future will demand a complete rethink. ‘Events are only going to get faster, wetter and more dangerous,’ says Rhone. ‘Sailors will require much more protection from impact; fortunately we’ve already done a lot of work in that area while creating new garments with Franck Cammas and Groupama Team France for the America’s Cup.

‘Usefully, we worked with Armel Le Cléac’h providing him with the kit for winning the Vendée Globe, so we’ve got a great place to start from in terms of understanding foilassisted monohulls.’

Rhone has worked across many different sports, but says there’s nothing to touch offshore racing for the demands placed on clothing. ‘I can’t think of anything as hard on the kit as the Volvo race. If you’re in the middle of the ocean and something goes wrong with your kit, you’re kind of buggered!’