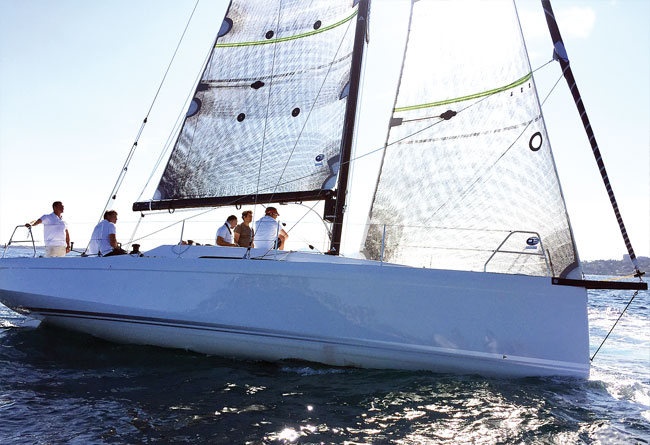 The first new-generation Grand Soleil 34 was launched at this year’s Yachting Festival de Cannes in September and, at the time of writing, boat number two has been launched and a further four boats are under construction. The new ‘34’ actually has an LOA of 10.70m (or just over 35ft), but remains the smallest boat the yard has launched since the original version of the Grand Soleil 34 in 1974.

Main picture: it’s intriguing that given the brief of a contemporary racer-cruiser with excellent interior and a hull and foil configuration targeted at top-level IRC racing, that the GS34 designers at Skyron delivered a boat with such striking visual similarities to the ClubSwan 50. With a keel gallery that allows 200kg of lead inserts, this slippery design looks a promising candidate for duel IRC/ORC optimisation for next year’s worlds in the Hague

A lot has happened in the sailing world since 1974 and Grand Soleil has moved with the times, creating a modern incarnation of the original. Both boats are beautifully built cruiser-racers, and the differences between them are explained by 43 years of advances in yacht design and construction technique, as well as the evolving priorities of Grand Soleil owners.

The Grand Soleil 58 has been one of 2017’s success stories, and the first 80-footer ever to be built by the yard is also under construction. Cantiere del Pardo has tried to squeeze some of the best features of these superyachts into a 34ft boat and the attention to detail is obvious from the moment you step onboard. Despite its small size, the new GS34 remains true to the brand’s DNA, and owners will be able to cruise their boats in a level of luxury that few, if any, other manufacturers of production cruiser-racers at this size can offer. The 34 uses the same light oak finish as the super-stylish new GS58, and it does not feel as if the boat’s cruising credentials have been compromised in the name of performance.

The boat is, however, something of a wolf in sheep’s clothing – and those looking at the lovely interior photos should not be fooled into thinking it will not hold its own on the racecourse. Grand Soleil has noted the commercial success of boats like the JPK 10.80 and Sunfast 3600 and is taking up the fight. The slender lines and single rudder of the original GS34 have been replaced by a powerful design with a full-length chine and twin rudders, making the new boat look closer to a Swan 50 than its own predecessor.

The boat has been designed by Skyron – a group of Italian naval architects whose previous projects range from Mini 650 designs to numerous ORC optimisations. Enrico Brandolini worked on hull and appendage CFD optimisation and is keen to point out that, despite first appearances, the boat is actually quite narrow at the waterline when not heeled and should therefore perform better in light-wind venues than many of its direct competitors. He also points out that while his brief was to design an IRC boat he has taken care to avoid needless penalties under the ORC rating system and feels that the boat could be very competitive during the combined IRC/ORC Offshore Sailing World Championships to be held next year in the Netherlands.

‘Today’s’ GS34 features an IRC optimised straight keel, which has space for 200kg of lead inserts – the intention being to allow owners to mode their boats for different rating rules, weather conditions and crew numbers. For example, owners of the new GS34 could choose to add the extra lead when racing double-handed and remove it again for crewed racing.

The new 34 is built in GRP sandwich with a PVC core but, unlike some other boats in its category, uses vinylester resin throughout. Bulkheads are all bonded to the hull and much of the supporting structure is made from carbon fibre, making the hull extremely stiff. 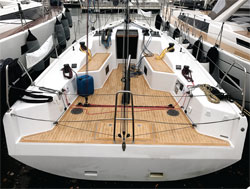 Above: the new GS34’s powerful flat aft sections also allow space for this generous, ergonomic and fastdraining cockpit while incorporating enough coaming and seating to qualify for cruiser-racer allowance under both IRC and ORC; twin rudders ensure that maximum use will always be made of the powerful sections downwind. However… in spite of such a powerful chined hull the GS34 also features very slender waterlines (below). A worthy successor to the first GS34

It is a testament to Cantiere del Pardo’s expertise in composite engineering that Grand Soleil has been able to build a boat that weighs the same as many other successful IRC boats of this size (4,900kg), has a higher ballast ratio than most (43-46 per cent), and also has a class-leading cruising interior. The Grand Soleil 34 may not be the cheapest on the market, but it is heartening to see that in return the boat is better built than the vast majority of its competitors.

Grand Soleil believes their new small boat will be of interest to a wide variety of different sailors: some of the first clients have bought the boat primarily to cruise, another is aiming to race across the Atlantic double-handed in the next Transquadra, while others will buy the boat primarily to race inshore with a crew.

The high form stability and twin rudders make the boat suited to reaching and shorthanded racing, and should also prove an advantage when cruising, which is also normally a relatively shorthanded affair!

The hull displays substantial rocker and is relatively narrow on the waterline when upright, which means it should also hold its own on windward-leeward courses. In fact, while all yacht design involves an element of compromise, this boat promises to at least hold its own under IRC across the complete range of conditions.

Ghislain Gomiot, head of Grand Soleil France, is certainly convinced about the direction that the yard has taken with the new boat. ‘Offshore racing in general, and particularly shorthanded offshore racing under IRC, is really booming at the moment.

‘Events like the ArMen Race, Transquadra and Rolex Fastnet Race are enjoying record entry numbers, while in contrast inshore events are struggling a little; it’s logical for our business to adapt to our clients’ demands and develop a boat more oriented towards shorthanded offshore racing,’ he says.

The Grand Soleil 34 does not promise revolution, but is instead a thoughtful evolution of a proven winning formula.