Pickled herring all round 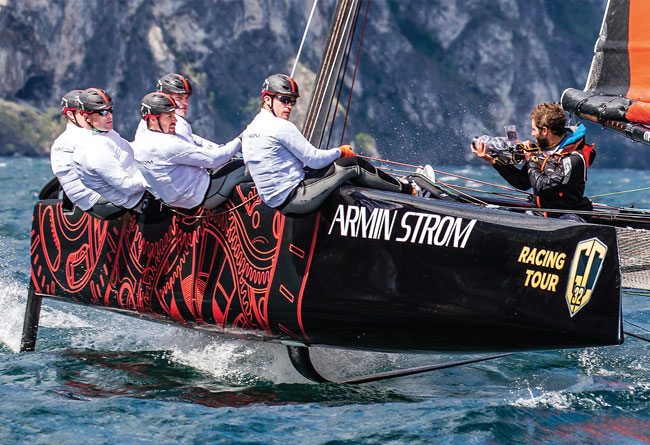 The annual conference for the business of yacht racing will celebrate its 10th anniversary in November in Aarhus, Denmark. Founded in 2008, the event has steadily gained momentum since it was taken over by the Genevabased team at MaxComm Communication, led by event MC Bernard Schopfer.

Main picture: The Mirabaud Sailing Video Award celebrates the best sailing videos produced each year and their authors, who often work in difficult conditions such as the Icarus cameraman on Flavio Marazzi’s GC32. The GC32 was launched as a non-foiler five years ago; foils were always envisaged and once added the boat also became the weapon of choice for the Extreme Sailing Series

In the three years since, the number of exhibitors has tripled. For a great many of those involved at the sharper end of yacht racing – opinion-formers, suppliers, sailors, organisers, sponsors, administrators – the Forum has become an important information sharing and networking opportunity in the run-up to Christmas.

The Yacht Racing Forum remains the only business-to-business conference dedicated to bringing together players from across the whole yacht racing industry and the 2017 conference will once again be populated by key personalities from within the industry worldwide.

The event will also provide the chance to discuss some of the much wider issues increasingly facing the sport. Kim Andersen, World Sailing president since November 2016, will give a keynote address with other members of the sport’s governing body contributing on a range of specialist topics.

The theme of this year’s conference is ‘Growing the Sport’. The 2017 Forum will therefore focus on mainstream and popular yacht racing. ‘We’ve often received feedback that we were too elitist in the past,’ says Bernard Schopfer, CEO of the Yacht Racing Forum.

‘We have taken those comments onboard and will make a feature this November of debating issues that affect every competitive sailor, not just the pros. Having said this, we will carry on looking with great interest at the major professional events, the Volvo Ocean Race, America’s Cup, Extreme Sailing Series or World Match Racing Tour to name a few. They will all be represented by senior management in Aarhus.’

The imagery hub
Sailing cameramen and photographers are too often overlooked for the support they provide to the sport. We need them and we admire their work, but most people don’t know who they are nor have any idea how hard their job can be.

Sailing imagery is also at the heart of the commercial development of our sport, and this is one of the reasons why the Yacht Racing Forum gives such prominence to photographers and film producers. The Forum hosts the Mirabaud Yacht Racing Image photo gallery and organises the annual prizegiving in public.

The same will, from now on, apply to the more recently created Mirabaud Sailing Video Award, with the best clips being shown to delegates while the winners are called on stage to receive their prizes.

These are the only events in the world of their kind, aimed at celebrating the best sailing images produced each year and, most importantly, celebrating those who have produced them. They are annual contests open to professionals from all over the world, as well as to sailors who today produce very fine examples of onboard video work while competing in the events themselves.

And our delegates at the Yacht Racing Forum are of course their clients: event organisers, teams, sponsors, classes… It was therefore rather logical to connect the two!

A great location
The Yacht Racing Forum 2017 will take place over 27-28 November in Aarhus. Denmark’s second biggest city is European capital of culture in 2017; a perfect and newsworthy destination located at the heart of Europe.

Aarhus is also positioning itself at the heart of the international sailing calendar. This year’s Yacht Racing Forum will take place eight months prior to the sailing world championships, where 1,600 sailors from 100 nations will be competing midway through the Tokyo Olympic cycle. Aarhus will also host a pitstop on the next Volvo Ocean Race, on the final leg between Gothenburg and The Hague.

Aarhus is served by two international airports: Aarhus and Billund. Aarhus Airport is located 44km northeast of the city with flights by numerous major carriers including British Airways, Ryanair and Scandinavian Airlines. Billund Airport is slightly further away, but bigger with international flights from Scandinavian Airlines, KLM and Air France.

Above: The Spanish 470 team of Onan/Cabrera competing in the Medal Race at the 2014 multi-class sailing world champion ship in Abu Dhabi. The next event is scheduled to be held in Aarhus – site of this year’s Yacht Race Forum – in summer 2018. Aarhus is increasingly popular as a major championship venue and is also the setting for much of the development of new tracker systems – benefiting from a strong technology industry that sees sailing as a useful local testtrack for dynamic new spectating systems for sports fans

Courtesy cars provided by Volvo will transport delegates from both airports to the Blu Radisson hotel where the conference will take place.

Two conferences, one exhibition
(and maybe even some parties)
The sailing world is changing fast and faces new issues that impact its participants as well as those involved in the sport’s organisation or finance, related to, among others things, safety and commercial development. Flying boats, rigid sails, new events, formats and courses, venues, partners and sponsors all help to shape the new face of the sport and raise questions that will be debated this year in Denmark.

The 2017 forum will be divided into four modules: Top of the Sport, Marketing & Media, A Sustainable Sport, Risk Management and Safety.

Held alongside the Forum, the one-day Design & Technology Symposium will also take place once again – on Monday 27 November – in a much bigger room than last year, when over 100 delegates crammed into an unexpectedly confined space (some new friendships were probably made as a result!) The price of fame and (another) lesson learnt.

Chaired by Seahorse contributor Dobbs Davis, the Symposium will as usual – and as its name suggests – focus on technical development and innovation. But there will be an added drive this year to extend beyond the technology to examine how to better encourage technical trickledown, to benefit the more mainstream areas of both racing and cruising.

Day one will conclude with our evening reception, as usual to be hosted in some style by North Sails.

Day two brings both symposium audiences together to focus on topics of wider interest for sailors, event organisers, yacht clubs, designers and sponsors.

Every year the forum brings together the widest range of opinion-formers from across yacht racing and the yacht racing industry. This unique event provides the chance to discuss issues and share best practice in a well-organised, international and surprisingly relaxed environment. Networking opportunities abound – one more reason why many of the sport’s most successful brands and most committed stakeholders will also be there to welcome you to Yacht Racing Forum 2017.

Click here for more information on the Yacht Race Forum »