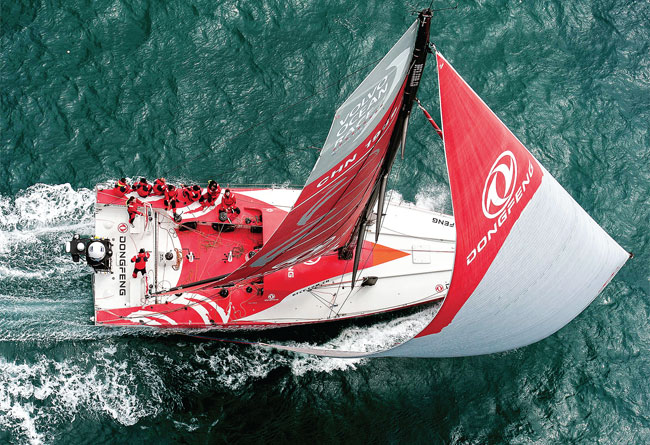 High-performing, reliable, lightweight and strong offshore rigs, every one built within the narrowest range of engineering tolerances. No problem…

When it comes to sailing races and sporting challenges, very little compares with the Volvo Ocean Race. And that challenge is wholly passed on in the requirements the race organisers place on the rig suppliers to the current VO65 fleet, Southern Spars.

Main picture: Dongfeng was first afloat of this year’s Volvo fleet and remains one of the main favourites to win an event that she threatened to take on the team’s debut three years ago. But on Leg Zero Dongfeng faced serious challenge from Spain’s Mapfre – also a repeat race entry. Mapfre, however, has flattered to deceive before in this event – is this the race in which that all changes?

The Kiwi sparmaker – whose reputation for getting things right first time was recently added to with their build of Team New Zealand’s winning America’s Cup catamaran – had a dream start in the round the world event that was then known as The Whitbread. Peter Blake’s Steinlager 2 sported twin rigs that were the first ever produced by Southern Spars for a round the world race competitor. Blake’s effort that year would go down as the most dominant ever in round the world racing when ‘Big Red’ went on to win every leg – a feat unmatched before or since.

Then things took off.

By the next event, raced in 1993- 94, Southern Spars produced rigs for six teams, including both the Maxi and Whitbread 60 division winners, NZ Endeavour and Yamaha.

And the story has continued to grow, Southern Spars having so far supplied masts to a total of 46 competing teams. With a list of past customers that includes seven of the last nine winning teams in the Whitbread/Volvo Ocean Race it is surely no exaggeration to say that winning teams choose Southern Spars!

So how is one company so successful in an event in which, before the advent of the VO65 one-design in 2012, teams were each pouring tens of thousands of dollars into developing their own technical innovations to give themselves a small competitive edge wherever it could be found?

‘We understand this race,’ says company founder and director Mark Hauser – who sailed on the winner of the 1993-94 Whitbread Race. ‘If you look around our offices, so many of the people here have a history with it. That understanding of what the people and the boats go through is instrumental in helping us work with the teams to produce a mast that is not only fast, but will get them around the track in one piece.’

Following the 2011-12 race, where Telefónica and Camper were the only Volvo 70s to lap the planet without a major rig failure, and were also the only boats to have a full Southern Spars mast and rigging package, Southern Spars were selected to supply the one-design masts for the 2014-15 VO65 fleet.

The one-design nature of the new yachts would mean that the absolute strictest of design and manufacture parameters would have to be maintained to make sure that all of the 11 masts supplied to the race were identical. For two masts to be the same, exactly the same, there are many things to consider. The most obvious and easy to control is of course the geometry, the length of the tube and the location of the fittings. However, other factors like weight, centre of gravity and bend profile, all critical to performance, are much harder to control.

‘For everything that we manufacture we apply a stringent array of checks – these start with ensuring that the physical material we put into a spar is up to standard and is going to behave the way that we expect,’ says Dr Chris Hickey, Southern Spars’ head of Materials and Process Engineering.

Above: having used their spar making skills to deliver a complete America’s Cup-winning catamaran (their first boat) it’s back to business as usual at Southern Spars. As the laminate layers get thinner and thinner with the use of Thin Ply Technology (TPT) it’s more essential than ever to automate production to ease issues of accuracy and also the physical handling of such fine materials. But there’s plenty of scope still (below) for human input

Ensuring that the material that goes into each mast is the same is the first step in making sure the final products will be within the one per cent accuracy window set down by Volvo Ocean Race management.

As the raw material is laid into the mast moulds, every individual layer is then checked and signed off, making sure that it is in the right place with the right orientation (within the moulds themselves there are also a series of datum marks used later as reference points for the accurate placement of fittings).

Once cooked, each tube is NDT tested with ultrasound to check that the finished laminate meets expectations throughout. The weight of the mast shells and every component that goes onto them is also weighed at every stage and tracked to ensure each spar remains within that magic one per cent.

‘Once the masts are into the fit-out stage we slot them into a set of cradles that are bolted to the floor, and then line up all of our jigs,’ says Lance Manson, Southern Spars’ project manager for the Volvo masts. ‘The jigs make up a series of guides for cutting and drilling holes and they get aligned with the datums. There are jig sets for all of the fittings, spreader roots, rigging attachment points and everything else, so that they come out of the shop millimetre perfect.

‘We go to great lengths to make sure these rigs really are all the same,’ says Lance. ‘Everything about them as they go through manufacture is weighed and checked and recorded in their own file, known as a Blue Book. It’s extremely important that we get the one-design aspect of the masts correct.

‘All of the sailors want to know they have got a mast that is just as good as the rest of the fleet, so we put a massive emphasis on it because we want to be sure that it is a fair race. It’s the same as it is with the hulls and the sails. Sure, the sailors need an even platform… but they also need to believe that they have that even platform.’

The average weight of the 11 complete masts delivered for the 2014-15 race was 415.2kg. The difference in weight between the lightest and heaviest just 1.35kg, or 0.32 per cent. The tube length of those masts is 28.4m, however the range in the balance point, or centre of gravity among the masts is only 30mm, which makes them identical to 0.12 per cent.

In terms of bend profile, before leaving the factory the rigs are supported at either end and a 400kg weight is suspended from the middle and bend response carefully mapped. The range of bending deflections across the 11 spars was recorded at just 1.4mm. On a spar nearly 30m in length…

The proven repeatability of the Southern Spars process was a key to winning the contract to build a new round of masts for the 2017-18 race. Teams were given an option of using the existing mast in their allocated boat or buying a new one, which all but two teams chose to do.

However, one-design is not the only thing on Southern Spars’ mind. ‘Safety is of the utmost importance for us too,’ says Lance. ‘Not just on these masts, but in all of the masts we make.

‘In the conditions these guys are going into there aren’t any second chances; we have to make sure the masts and the rigging are safe. The rigs get pushed hard, harder now because of the one-design nature of the current race – whoever can push the hardest for the longest is going to win. As long, of course, as they are pushing in the right direction. So, simple really!