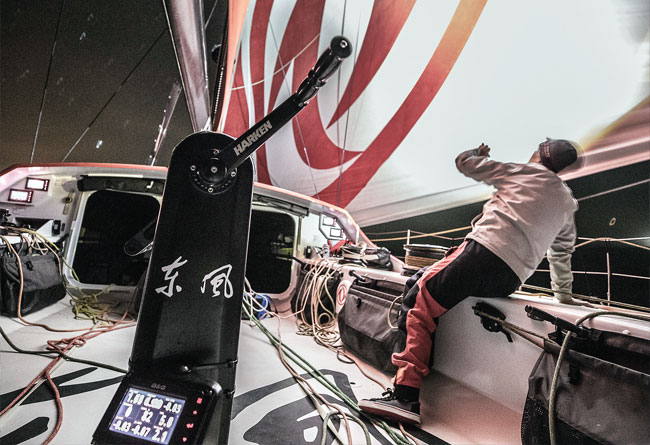 Sitting on the rail – and turning a lot of winches – during the 2017 Fastnet with the rest of his VO65 crew was Blue Robinson. As is usual on offshore races this was indeed a subject of serious debate

Seahorse Magazine: Martine [Grael], when did you first consider the Volvo Ocean Race… and when were you asked?

Martine Grael: I was already interested in the last VOR and what the SCA team put together, but it was clear my goal was the 2016 Olympic Games so I stayed focused solely on that. But when the rule changed to promote mixed crew for the 2017 race I immediately tuned in and started looking out for a good opportunity.

Main picture: already a Volvo winner (on Groupama) Charles Caudrelier’s Dongfeng took first blood in the 2017-18 edition by winning the Fastnet VO65 class by under a minute from Mapfre. But thereafter it was the Spanish entry all the way, wrapping up Leg Zero after the course was shortened in light winds off northern Spain. The final – drifting – leg was won by Vestas (below) with another Groupama alumnae, Damian Foxall a watch leader in US skipper Charlie Enright’s crew. This is Enright’s second Volvo having skippered Alvimedica to 5th place three years ago 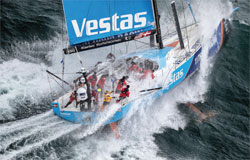 MG: None! I had no idea if I would like it or not so, as early as I could, I went offshore with one of the teams to check that it would actually work for me!

MG: Since the announcement of the rule change for mixed teams and then my initial contact with a VOR team, I pretty much asked everyone I knew who sailed for their opinion on the rules, women onboard, ocean sailing, everything really, so I did as much research as I could including watching all the videos. I talked to Javier after the Olympics last year about the possibility of competing in the VOR, in particular if there was a chance to do it with my own team. But that didn’t quite happen.

SH: I assume that [your father] Torben was positive…

MG: Actually, he asked me three times if I really wanted to do this! He made it very clear that there were a lot of shitty moments and he wanted to check that I could really balance the good moments enough to make up for the bad times.

SH: You have to be very fit, strong and flexible as an Olympic sailor, but you have a key weight target. How has your training and diet changed for the VOR?

MG: I am pushing harder in the gym than I ever pushed in my life, particularly with the weights. For the 49erFX I was close to ideal weight, so just had to be super-agile and fit. But now I have to focus more on maximising core strength – while trying not to damage anything. Having got a place onboard it becomes a serious responsibility to make sure the strength gap to the men is reduced as much as possible.

However… we expect that Tokyo in 2020 will be slightly windier than Rio so it could still work out really well for me!

SH: AkzoNobel is a strong team in depth and talent. Having now joined them what do you most need to work on?

MG: I’m pretty raw in big boat sailing still, so it will take some time until I can say I am super-comfortable in the boat and that I don’t have to think about everything we do. Right now I have to go over each manoeuvre in my head before I do it, I am still making mistakes. But like any type of racing it’s just about getting hours on the water. We haven’t done a lot of sailing together yet – only two teams have – so it still feels slightly novel to review our improvements after each day on the water.

SH: Annemieke [Bes], when did you first consider the race – and when were you approached by AkzoNobel?

Annemieke Bes: Well, this is a longterm dream. I sailed in three Olympic Games, then I trialled with SCA in the last VOR; that was a great kick-start into offshore sailing. I really liked what I found so it was a great opportunity to sign with these guys this time.

SH: Thoughts on joining the team?

AB: No hesitation, that’s for sure! It’s a great opportunity but, to be honest, in some areas I don’t know what to expect. I think at the beginning there was a fair bit of debate when the new rule was announced allowing mixed teams, but after we trained and sailed together it was pretty clear you need the women onboard. You just need the hands on these boats.

SH: Dee [Caffari], chatting with the sailors onboard Turn the Tide on Plastic during the Fastnet, I discovered that none of your young crew have crossed the Equator, let alone experienced the Southern Ocean!

Dee Caffari: The scary thing is that in three months I will be taking them into the south and the burden of responsibility is huge. But what is great is that the safety conversations in the briefing you sat in on were being led by the crew – that it came from them this early in their training. But I also pointed out that when it is cold, wet and scary in the south you will not be on deck more than you need to be; so making them realise that right now, that personal management and the ability to sustain themselves for the next intense 12 months are as important as sailing ability… this is the part I think they still underestimate.

SH: Blair [Tuke] – you returned to the AC World Series in Toulon from Rio last year as a freshly minted gold medallist and I walked through your team tent to see you and Pete [Burling] sweeping the floor… That says a lot about the New Zealand and particularly the ETNZ culture. What can you say so far about the Xabi Fernández and Mapfre team culture!

Blair Tuke: Certainly it’s been great to get here and get settled in with the team. This was the perfect opportunity for me and so far I have been enjoying the vibe and culture that Xabi and the guys have. Xabi is a strong sailor who leads by example, so it is an interesting balance of an easy, calm culture while looking hard at what lies ahead.

SH: You must have been approached by many of the best grand prix programmes.

BT: This isn’t something I jumped at straight after the Cup in Bermuda, I have been talking to Xabi about this for a long time. Mapfre did the last VOR and performed well, and Xabi has put a really good team in place this time; so with me always wanting to race in the Volvo, and even though it was a rapid turnaround after Bermuda, this is the right time for me and a great opportunity.

BT: For me, I need to get into and understand these boats as I still haven’t sailed them much. So I have a lot of learning on the mechanics and how to make them go fast in the range of conditions as driver and trimmer. It’s a talented group: Joan [Vila] as navigator, Xabi is a great leader, Robbie [Greenhalgh], Sophie, Neti… all the team are strong so we just need to spend the time working together, getting smooth and ensuring all the sail transitions are solid.

SH: Sophie [Ciszek] – How long to recover from your last Volvo? Sophie Ciszek: A full couple of months for sure. Once you are out of the Volvo environment your body keeps telling you it needs to recover more. In Volvo mode you just keep on going.

SC: For me it was always my back. I have been working on it since I injured it in the last race and probably will be for the rest of my life…

SH: How tough is the modern VOR on the body generally?

SC: I don’t think you can describe how tough it is. It’s not only physically tough… mentally it’s insanely tough. You are sleep deprived, you are struggling with weight loss. I lost weight on every single leg last time which meant I had to be smart with what I ate each time I got ashore.

SH: So physical preparation this time…

SC: Well, you don’t want to put on too much weight if it is fat. You want to build muscle, especially if you are a woman. It’s really important to get as much muscle on as you can; having said that I have also been working pretty hard for the past few months recovering from another injury. So consistent rehab work there in the gym, but working also on strength areas and with a cardio and a recovery day every few days.

SH: What was the corporate feedback about raising another all-women team?

SC: We have been trying to push and promote every angle of women’s sailing, in every discipline, in dinghies, Olympics, high performance, foiling, offshore, everyone from the SCA team has been out there trying to spread this further. I wasn’t in the group looking for sponsorship this time, but apparently there were times we came close as an all-girls project. But as a group we’d also set ourselves a deadline… then as that approached the rules changed to include women in the teams. It was obvious for me to switch to another project.

SH: A big Southern Ocean leg occurs early in this race from Cape Town to Melbourne. How do you prepare for that mentally?

SC: Having done the last race certainly it will be easier. But mentally I like to do a lot of visualisation, playing everything through in my mind and preparing mentally for staying safe onboard. I feel very good with the guys I am sailing with, I respect and trust them all, I know they are good, so that sits well in my mind, which is exciting. Actually, I think heading into the Southern Ocean early is better as we will be fitter and sharper from the start. It will be fun!

BT: It’s great to be able to do that Southern Ocean leg – it’s been a while since that was in the race at all, so for me to come into this event is really cool. And part of the drive for me to get here early and get settled into the team is to be ready for the race start and for that first big leg. These months of preparation are very important for me. I’m pretty sure I’ll be ready to send it in the south…