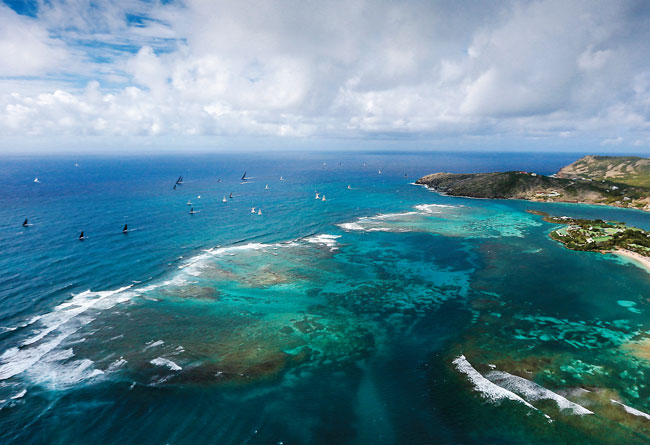 We’ve managed to remain in close touch with our friends in the Caribbean Sailing Association throughout their recent and dreadful experiences – offering by comparison minuscule but still sincere support wherever it can be of any use whatsoever.

We were thrilled – and surprised – by the inspiring stated ambition to run their scheduled regattas for the coming 2018 Caribbean season. We at Seahorse will be digging deep and stretching ourselves a little thin but we are committing now to having people at all the events we possibly can and we very much encourage the entire sailing community to do the same.

The Caribbean regatta circuit plays a huge role in supporting the local economies of many of the islands that were just ravaged by Hurricane Irma – islands and communities that have been incredibly welcoming to us all in the past.

Now it’s our turn. As racing sailors, if ever you had an interest in visiting or revisiting a Caribbean Regatta then early 2018 is the best – and most public spirited – opportunity (hopefully) any of us will have in our lifetimes.

The following article (which was written pre Irma) maps out the CSA’s key events – we urge you to commit to one or more today, notify the organisers of your intention to take part and support wonderful communities that are at this moment working desperately hard to provide their families with something approaching normal living in the most adverse and dispiriting of conditions.

Can’t make up your mind, why not have all of it?

Anyone considering putting together a yacht racing programme in the Caribbean could be forgiven for being slightly bewildered by the vast choice of regattas that take place in so many different locations every year. In the past there were similar challenges for organisers trying to identify dates that were both amenable to the participant and did not clash with other existing events.

The Caribbean Sailing Association (CSA), under the guidance of past presidents such as Cary Lee Byerley and Peter Holmberg, and current president Kathy Lammers, have since paid a great service to those participating on the Caribbean circuit by establishing better dialogue between the many different organisers. The result is that no longer are there the major clashes between events that today flow smoothly into each other. On the CSA website there is now a splendidly organised calendar that lists the dates of all major winter regattas in the Caribbean through to 2022 – one great step in regatta coordination and compatibility.

2018 offers yet again a wonderful selection of regattas for sailors to participate in – all taking place in the Leeward and Windward chain in a geographically logical sequence. The ARC and the RORC Transatlantic Race both act as handy feeder races for European based entries (note that this year’s RORC Transatlantic Race finishes in Virgin Gorda rather than Grenada).

January First up in 2018 is the Mount Gay Rum Round Barbados Race Series (16-24 Jan) – founded by Howard Palmer supported by energetic members of the Barbados Cruising Club. This event attracts an eclectically diverse fleet of yachts (even windsurfers) for coastal racing, a round-the-island race and a passage race to Antigua. Andy Budgen’s foiling Moth led the fleet around in 2017 (sic), setting a new foiling record to add to his monohull record on the V070 Monster Project. Many classic yachts also attend this event, notably grand schooners like Elena and Adix; the classic Mylne ketch Blue Peter won the 2017 CSA Cruising Class in the Coastal Series.

Grenada Sailing Week (29 Jan- 3 Feb) is a well-established ‘must-do’ for anyone visiting the famous Spice Isle. Richard Szyjan, a local sailmaker and rigger, is a longterm organiser and participant in this excellent regatta where the organisers reliably ensure the best Caribbean racing experience. Expect to see the usual crowd from Trinidad as well as the local talent including Jason Fletcher of Grenada Marine, Peter Evans and Danny Donelan in his Petite Martinique sloop Savvy. Several big boats but one for the smaller boats to enjoy as well.

February The first large yacht event is the Antigua Superyacht Challenge (1-4 Feb) organised by Stan Pearson and Paul Deeth. Attracting fleets of 10-15 yachts, this event has become highly regarded for its quality and close racing. Adela, Rebecca and Marama are regulars at the regatta which has now adopted the popular ORCSy handicap system. Paul and Stan also founded the Antigua 360 (16 Feb) event, a nice warm-up before the RORC Caribbean 600. Following some legs of the 600 course, this round-Antigua race is the best possible practice for yachts entering the RORC’s offshore classic.

And so to the big offshore draw… The RORC Caribbean 600 Race (19-23 Feb) has evolved into an international regatta of some stature. With 80 boats (and 30 nationalities) racing in 2017, yachts are attracted from all over the world. Grand prix yachts with pro crew compete for the IRC and CSA trophies alongside club sailors in a tough crew challenge with 11 island roundings. The records are currently held by Rambler 100 and the MOD Phaedo3 – this is a Caribbean offshore racing adventure… with an onshore celebration not to be missed.

March The Heineken/St Maarten Regatta (1-4 March) is another event that should be in any Caribbean race programme. This major CSA regatta was founded by Sir Robbie Ferron and today it regularly attracts 150+ entries. A popular charter boat regatta in the early days, it now has a serious racing element with well-known grand prix racers joining the fray. This is also a regular stop for Gunboat owners. The event kicks off with the Gill Commodore’s Cup (1 March). Billed as ‘serious fun’, top end-music events play a strong part in the regatta’s tradition. Lionel Pean’s V070 SFS was the scratch boat in 2017 while many of the regulars like Oystercatcher and David Cullen’s Pocket Rocket also continued their winning ways.

Two superyacht events follow closely – The Loro Piana Caribbean Superyacht Regatta and Rendezvous (9-12 March) in Virgin Gorda, followed by the St Barths Bucket (15-18 March). The even spacing between these two headline superyacht events enables yachts to comfortably participate in both regattas if they so choose. This has proved popular with owners and crew who, for little extra effort, can extend their racing beyond a threeday event. Many great yachts of the past and present attend these regattas and the Bucket has been enhanced by the increasing presence of the J Class with its own class start. In St Barths this year Jim Clarke’s Hanuman beat Velsheda on countback in a closely fought contest between a record six J Class taking part. St Barths will be the bigger of these two events with 30+ yachts split into five classes. In 2017 the new owner of Spiip (ex-Unfurled) prevailed in the most competitive class to win the Bucket overall, and Nilaya held a perfect score in every race at the Loro Piana to win overall in Virgin Gorda.

March/April Two of the oldest regattas in the Caribbean follow the big boat events, St Thomas International Regatta (23-25 March) followed by the BVI Spring Regatta and Sailing Festival (26 March- 1 April). The STIR is preceded by the Round the Rocks Race (22 March). In 2017 Blitz (Peter Corr) prevailed in his King 40 in the CSA spinnaker class and an old Caribbean favourite, Hotel California (Peter Schmidt), won the non-spinnaker class. Fujin, Greg Slyngstad’s interesting – and fast – Bieker cat won the multihulls. The main event saw 86 boats split into seven classes with the IC 24s (modified J24s) won by Puerto Rican Fraito Lugo’s Orion. The BVI Spring Regatta is a favourite with many European boats that cross the pond each year and a new outer marina at Nanny Key has enhanced the comfort for the deeper-draft yachts. RORC Admiral Andrew McIrvine took a team to participate in 2017 but in light winds Blitz won again and Jason Carol’s turboed Gunboat Elvis took the multihull spoils. The BVI series also includes a lap of Tortola – though in 2018 the inaugural Full Moon Race (27 March) will take its place instead – a 165nm circumnavigation of no fewer than 64 islands and rocks…

April/May Following on from the BVI is Les Voiles de St-Barth (9-14 April), an event conceived in 2010 by Luc Poupon. With a high-end grand prix fleet and a perfect island setting, Les Voiles has become a well-attended regatta. French Caribbean chic combined with high end racing around an interesting and challenging coastline is a sure recipe for success. The Maxi 72s attended in 2017 with Proteus (George Sakelaris) winning the Maxi 1 battle and Windfall (Mick Cotter) taking the spoils in Maxi 2. In the CSA classes it was good to see the TP52 Sorcha (Peter Harrison) win, as the owner is a headline sponsor of the event. Blitz (Peter Corr) was in the money again, as was Fujin (Peter Schmidt) in the multihull class – clearly yachts who enjoyed their Caribbean tour.

Traditionally the two final events of the Caribbean season take us to Antigua for the Antigua Classic Yacht Regatta (18-24 April) and Antigua Sailing Week (29 April-4 May). Originally a combined event, the two regattas are probably the oldest established events in the Caribbean. 2017 saw the return of the Herreschoff-design Mariette of 1915 to win her class, while Carlo Falcone’s lovely Fyfe/Mylne ketch Mariella again took away the overall prize for her trophy cabinet. The three-mast Adix graced the Classic class A among the traditional classes, which included a variety of yachts from the boards of a wide range of famous classic designers.

The spectacle in Nelson’s Dockyard takes one back to a different era. In 2017 Antigua Sailing Week was celebrating its 50th edition and credit must be given to Kathy Lammers and her team for making a huge effort to celebrate the event in style; 144 boats started and among them was Antigua regular Sojana back to take prizes, as was Kialoa 3 (a winning yacht that used to be owned by the late Jim Kilroy). Scarlet Oyster (Ross Appleby) was seen on the podium once again, as were Lazy Dog (Sergio Sagrameso) from Puerto Rico and Hightide, a winning yacht owned by the late Jol Byerley and sailed this year by Richard Archer and other close friends of its popular former skipper.

The season closes with the youngest event on the circuit – a final chance for the boats to stretch their legs on the 935nm Antigua-Bermuda Race; a familiar passage for many bound home for the eastern USA and Europe, providing a final test of racing skill and a warm welcome and refresher before the long journey home.

2018 will continue to offer the same wonderful selection of Caribbean regattas to satisfy all tastes – superyacht events, grand prix events, offshore challenges, as well as Caribbean-flavoured events with their much more traditional elements. To their credit the CSA have been central in introducing this balanced structure to the Caribbean sailing programme, allowing sailors to participate in a grand yachting series that for the most fortunate can last from January right through to May.

How cool is that?
John Burnie
John Burnie lived in the Caribbean for 10 years and has participated in all the regattas listed. He was co-founder of the RORC Caribbean 600 with Stan Pearson and RORC CEO Eddie Warden Owen 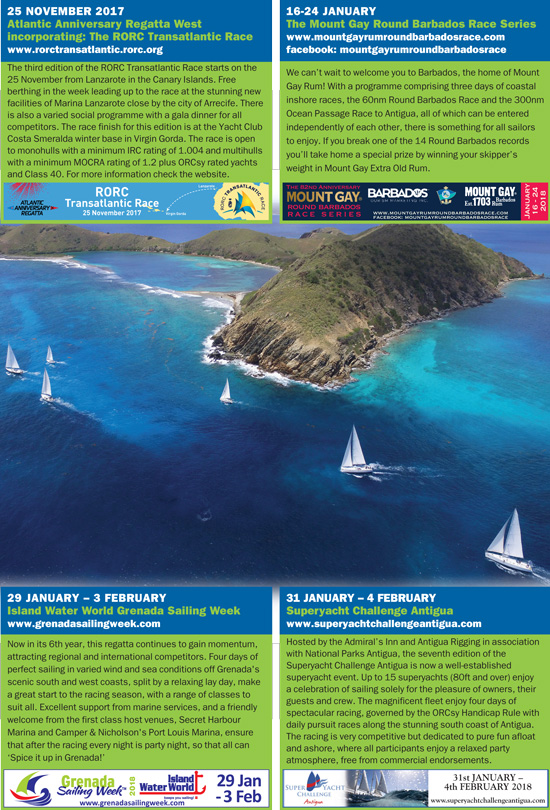 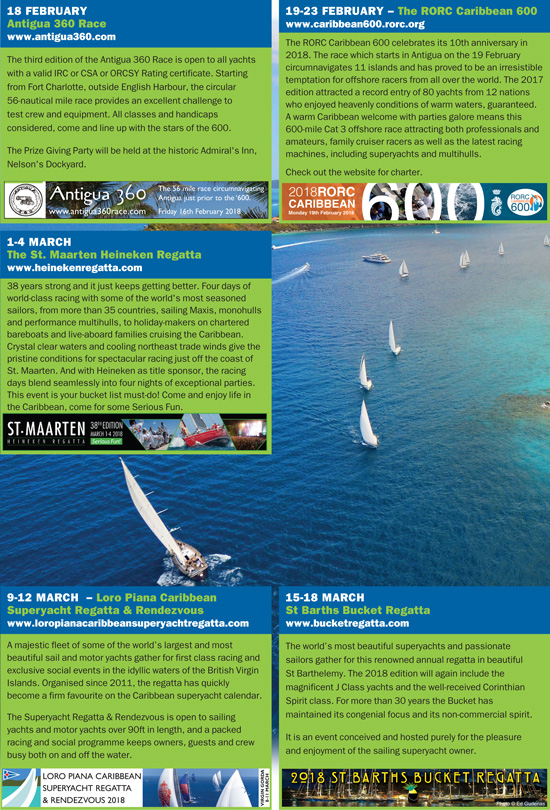 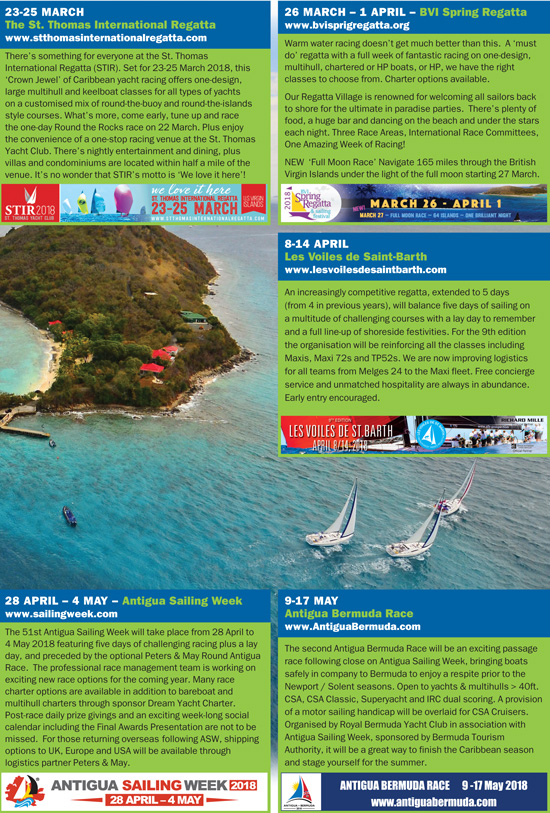