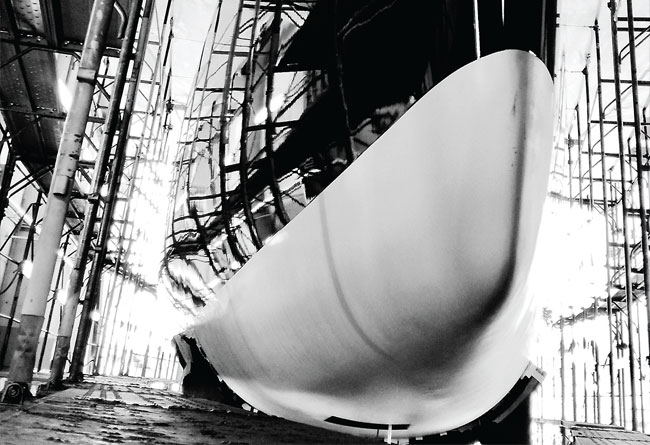 A boatbuilding team utterly obsessed with producing the best boats in the world... the lightest, the strongest and the fastest. An ethos that spreads from the Persico CEO to the men and women who drive the forklifts

Talking about the WallyCento that is currently nearing completion, Marcello Persico is clearly more than a little excited about the future of this class. ‘I consider it the top class you can race with a boat that also offers a relatively high standard of comfort. There is nothing comparable at the moment. You have to choose either a pure racing machine or a comfortable superyacht,’ he says.

Main picture: When the 3rd WallyCento Magic Carpet went afloat it was clearly a step forward in terms of both saving weight in the build and keeping the weight out of the ends. Boat no4, seen here, is certain to be an even bigger game changer in an already jaw-dropping racing class

The class was the brainchild of Luca Bassani, founder of Wally Yachts, and is an evolution of the successful Wally template, but with additional box rule limits to try to ensure that the racing happens at close quarters on the water as well as in rating. It was also seen as an opportunity to push the limits of the Wally Yachts approach, bringing high-performance racing to a 100-footer fleet as well as creating a boat where blue water cruising offers luxury and performance between regattas.

The result to date is that the latest boat from Wally and Persico Marine, Mills Design, Pininfarina, Pure Engineering and Carlo Torre, in collaboration with Marc Pajot, is the fourth WallyCento to go afloat. Marcello is incredibly proud of what his team have achieved with the build. As always, the more accurately you can replicate the engineering and design through the build process, the higher the chances of reaching, and hopefully exceeding, the client’s hopes. At Persico this started in Nembro, near Bergamo, where the company’s principal facility has been producing the highest-quality tooling for the automotive and more recently the marine industry for over 40 years.

Here the experience from these years, and the Volvo Ocean 65 project itself, meant that the CNC hull tool for the latest WallyCento was built in two pieces split on the centreline – as with the Volvo Ocean 65 hull tool. The team took every opportunity to utilise the Persico resources and expertise in manufacturing all tooling using the CNC machines on site. Building the tooling in this way also ensures that every item fits perfectly, which may not be the case when tooling is built off site or uses different methods and subcontractors.

Working alongside Pure Engineering has also ensured that the Persico team have been able to carry out all material testing and to review to allow Pure to develop a package tailored to the actual characteristics of the materials, as they are to be applied and cured, rather than rely on predicted or generic expectations.

This again narrows the tolerances and allows Persico Marine to produce the best possible solutions. A good example of this is the keel case. The WallyCento rules require that the keel draft can be reduced from the racing depth of 6.2m to 4.5m, allowing the yachts to berth in a wider range of ports and marinas. This creates an unusually heavily loaded area on a high-performance boat of this size, so tolerances are reduced dramatically.

The solution in this case involved Persico employing a large CNC-machined steel tool, which just fitted inside their biggest autoclave, to cure the carbon housing. The laminate was prepared in the company’s newest clean room after precision cutting on the plotter. Once complete, the interior of the component was machined while still in the tool to avoid the remote risk of distortion. This resulted in a finished shape within 0.2mm of the design shape and the ability to ensure that the keel fin itself enjoys the maximum possible bearing surface to ensure loads are transferred to the casing from the keel exactly as designed and intended.

With the WallyCento rule stipulating a maximum boat weight, and the rig size being more than generous, every gramme saved in construction is swallowed up in the bulb, transferring straight to the eagerly needed righting moment. 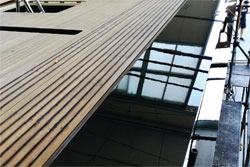 Nearing the big day itself, Persico’s first WallyCento displays a wonderful blend of traditional wood (above) and modern composite. The Mark Mills design also shows a lot of nice detailing such as this super-neat treatment of the retracting propulsion systems (below) 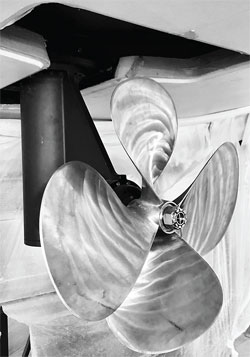 But of course a WallyCento is much more than a carbon shell. Unlike most high-performance yachts, it also has a fully functioning interior which genuinely allows the owner plus family and friends to do some serious cruising. In this area Persico Marine has not followed the trend of contracting an outside company to construct the internal components and complete the fit-out. Instead Persico ensured that they use all their in-house knowledge and tools to push the interior construction a stage further.

Where flat panels are used they have been constructed in-house in one of several clean rooms, with optimised laminates again cut on the plotter. Panels have then been either cured in a press or in one of the company’s two autoclaves before being trimmed to an exact shape on one of the many CNC machines. Any shaped panels have been created on shaped tools, again CNC-cut on site.

This solution also allowed for customisation of the final finish of each of the panels, tweaked to the exact preferences of the client and finished and assembled in Persico’s internal joinery department where surfaces are finished and painted to the highest quality under the watchful eye of the project’s stylists at Pininfarina.

Optimisation of the systems is also fundamental to the success of the project. With all running rigging being led so as to maintain a clean and efficient deck layout, and a full power winch system, there is always a high possibility of the system complexity getting out of hand. Only with regular detailed reviews of the overall systems and the correct integration of each element can the amount of redundancy be set at the right level without also overstepping the mark, adding unnecessarily to complexity, weight and cost.

The Persico team have also worked hard from the start with all the numerous suppliers to this project to ensure that the needs of a performance yacht that will be raced with a full crew are met, while also meeting the often quite different requirements of a relatively shorthanded cruising programme where the owner can have some fun with a yacht that retains the feel of a thoroughbred machine.

The end result is rapidly approaching the time to touch the water. While the WallyCento class may have taken longer than other classes to achieve momentum (largely due to the costs, logistics and complexity of any 100-footer project of this type), the evolution to a highly refined yacht where no stone has been left unturned, and even the smallest component is developed and expertly constructed, has been relatively rapid.

Each WallyCento to date has been built to exceed expectations. The latest from Persico Marine will be no exception and demonstrates that simply building a boat with the black stuff is only the start. To make full use of the properties of carbon fibre you need to leave nothing to chance and work to the tightest of tolerances. It will be very interesting to see the end result on the startline among the rest of the WallyCento fleet. It is certain that there will be some nervous faces on the competition when the fortunate owner steps from his current yacht onto his new steed.