Born in the Volvo – available to all 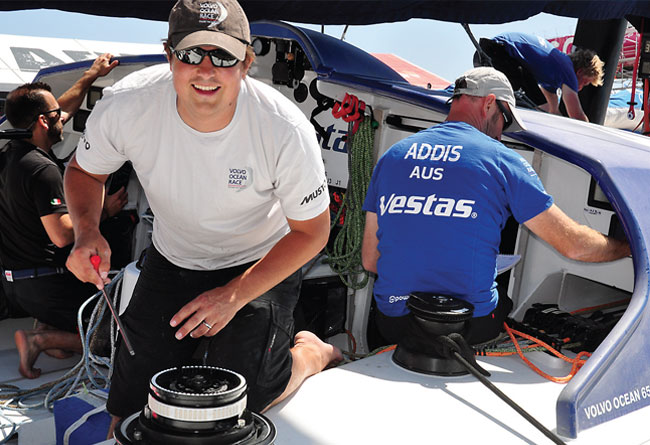 The performance and reliability of Harken hardware are worldrenowned – the majority of raceboats have at least one system that is being handled by a block, winch, bearing, cleat or other device made by Harken, whether installed as original equipment or a retrofit. But while Harken hardware is impressive, a new concept is being introduced that further extends both its working life and reliability.

Harken Tech Team ProCare is a new service designed to help competitive race and large-scale programmes keep their equipment running at 100 per cent – the ultimate objective being to reduce the chance of a breakdown caused by a Harken part to as close to zero as is possible in sometimes brutal operating environments.

This concept was piloted during the last Volvo Ocean Race and is being expanded during the next edition. The Harken Tech Team is at every race stop, working with the servicing teams in the Volvo Ocean Race Boatyard to keep systems operating at full potential. Some stopovers require a full service, where all pieces of the winches, pedestals, deck hardware and drive units are disassembled, inspected, cleaned and re-assembled, a process that can take technicians days of effort. At other stopovers the systems only received minor servicing, as per a schedule developed by the boatyard.

Main picture: the winches and other Harken systems on the reborn VO65 Vestas receive much deserved love and care ahead of her relaunch in Lisbon in the last Volvo round the world race. The ProCare programme relies on tight discipline from all those involved – seen here (below) are the carefully segregated Harken winch components during the refit of Mapfre for the 2017 Volvo Race

First applied in the last Volvo, the system worked well: there were very few Harken-related failures or breakdowns. More remarkably, as we enter this next cycle of Volvo Ocean 65s racing around the planet, most boats are still operating the same gear sets even after having already raced hard around the world.

A big factor in this longevity is that the ProCare service system employs refined methods to track data gathered at each stopover. For example, colour-coded inspection sheets are used to monitor the health of the parts – where green means the system is functioning fully, and amber means a part should be monitored closely but still is not in need of replacement. Red means replace immediately!

‘What we developed in the Volvo was a concept much like your mechanic at the auto shop who can access the service record for your car,’ explains Mark Gardner, custom project manager for Harken UK. ‘Your car is a complex system of mechanical parts that need regular attention to be fully functional. A good relationship with your mechanic ensures this long life of service, which is what we’re trying to achieve with the Tech Team ProCare programme. Another auto analogy is the pitstop: at some only fuel goes in, at others the tyres also need replacing.

For programmes outside the Volvo ProCare can be arranged by contacting Gardner for an inventory review of the yacht’s Harken gear. A log sheet is prepared with all the parts on a spreadsheet, recording when a part was new, when and where serviced, replacement intervals, plus notes on price and lead times for re-ordering. This record then becomes part of the boat’s maintenance profile for current or future owners.

Using the Tech Team ProCare service, owners and team managers have an aftercare contract to have their Harken systems inspected and serviced on a schedule defined to fit the racing programme. Gardner says it’s typical, for example, for active programmes to have two service pitstops in the Med for the summer season, and one in the Caribbean in the winter.

Gardner also envisions a future where each boat works with the Harken Tech Team through its own ProCare web portal where other information is available, such as:

Besides VO65s and TP52s now using this service, another fleet to benefit will be the superyachts, which are raced more and more often and demand more and more performance from their systems. ‘We see this as a value-added benefit,’ says Mark Wiss, Harken’s director of business development.

‘We have always tried to be present at major events, ready to step in when needed, but this is a reactive approach to problem solving. With ProCare we are now being proactive to meet the needs of our most competitive customers.