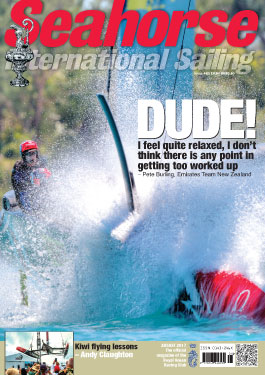 Smashed it!
Well, that was a week and a half. PETE BURLING, IVOR WILKINS, GRANT DALTON

Smarter in the lab and smarter on the water
Was everyone looking in the wrong place? ANDY CLAUGHTON

Wow!
It was one hell of an America’s Cup match to be commentating on for TV. KEN READ

Confessions of a Cup addict
Or to put it another way, the ability to change your mind gracefully… IAN WALKER

In praise of flexibility
Is there now the critical mass needed to get a bit more ambitious with some new formats for international offshore events? ROB WEILAND

Built (fast) to last
For many years ALEX THOMSON has bucked the wider trend with his choice of sailmaker for Hugo Boss. RICHARD BOUZAID, DAVID DUFF and MIKE SANDERSON have been there with the British skipper every step of the way

Too soon?
JAMES BOYD is excited by changes for the next Volvo race but highlights some of the less obvious technical hurdles that will need to be addressed

Breathe easier
Preserving the gap… and with it the warmth

The last straw…
But inch by inch we’ll get there

Timeless (and fast)
‘Wide-ranging success’ is a suitable moniker

Rod Davies
Team New Zealand’s match racing coach (natch) asks if you like living off the smell of an oily rag?

Design – Higher (and wider)
The 39ben is not a (wrong) birthday for the Land Rover BAR skipper but it does mark a radical step for another famous yacht racing name. ALEX VROLIJK and JOCHEN RIEKER