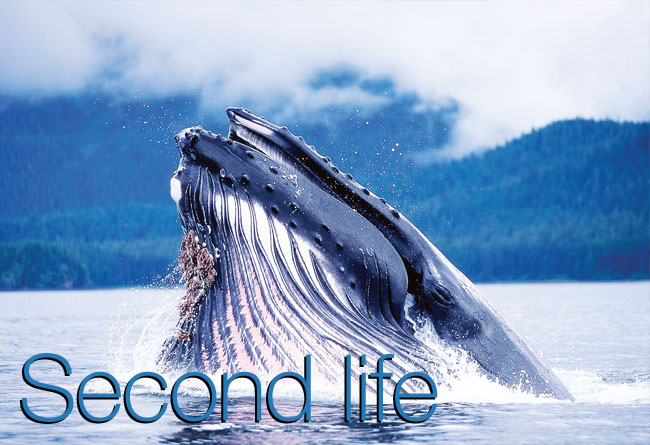 ‘A key element of The Schmidt Family Foundation strategy is to provide the resources for grantees to be successful at what they do. At 11th Hour Racing we leverage the platform of sport to broaden the connections between grantees, sponsorship and ambassadors, and we broadcast these inspiring stories to a larger, more diverse audience,’ says Todd McGuire, programme director of Newportbased 11th Hour Racing.

Main picture: Doing our best for Mr and Mrs Whale… Gram by gram, every bit of plastic entering the ocean will steadily impact the creatures we profess to care about so much. The irony is that it is frequently the smallest pieces that end up doing the most damage. It’s the rabbits that always get you, not the elephants

VOYAGE OF DISCOVERY
In the summer of 2016 11th Hour Racing grantee Rozalia Project sailed research vessel American Promise up the Hudson River to conduct the Hudson River Microfibre Sampling Expedition. This famous stretch of fresh and brackish water was a perfect laboratory: a giant river running through one of the most densely populated regions in the world.

Onboard American Promise particles were captured through ‘grab samples’, water samples passed through vacuum filters. Fibres from manmade sources, plastic and non-plastic, such as cotton textiles, were painstakingly counted under a microscope to measure microfibre contamination up and down the river – from the remote alpine regions to New York Harbour. These fibres easily enter the food chain and can ultimately end up on our plates.

Rozalia Project’s team knew from previous research that the logical source of the pollution was grey water from millions of washing machines throughout the Hudson River estuary. ‘We knew that washing machine effluent is a big source,’ says Rozalia Project’s director Rachael Miller, ‘but our research also pointed to air pollution, possibly from dryers and garment abrasion.’

Miller is also very careful to emphasise the context of this research. ‘This is more than just food wrappers,’ she says . ‘This fundamentally is less obvious and more complex.

‘Microfibre pollution is relevant to many sportsmen and women,’ says Miller. ‘Our clothing is synthetic, it’s technical and allows us to be active, warm and dry. But when tiny bits of that clothing break off and flow out of the drain we threaten the very venue that brings us so much joy.’

Like Rozalia’s previous efforts, the Hudson River Expedition has been both outreach and research involving a community of people who understand the problem and are working for a solution.

‘Our goal with marine debris is to make an impact,’ says Miller. ‘Having a consumer-based solution is one way to have such an impact, while enabling the community of sports enthusiasts to still enjoy what we love to do, but with a kinder environmental footprint.’

A passionate sailor himself and a coach on programmes such as Bella Mente and Quantum Racing, James Lyne is the co-founder of Rozalia Project. With his team he used bio-mimicry techniques to integrate the mechanics of undersea coral into the Cora Ball, an invention that once it goes on sale will capture loose microfibres at source: the washing machine.

The sphere, which looks like a sea creature itself, collects plastic and non-plastic fibres from textiles in the course of a normal wash cycle (as a bonus, the Cora Ball also collects human and pet hairs).

The ball, which won the 2016 Think Beyond Plastic Innovation Competition (in the microplastics category), is in turn quickly and easily picked clean with the potentially harmful debris removed then being passed on for recycling.

Rozalia estimate that if 10 per cent of US households use a Cora Ball it is possible to keep the plastic equivalent of 30 million bottles out of waterways every year.

But there still needs to be an emphasis on finding solutions at the top of the production chain: encouraging textile and clothing manufactures to invest in creating products differently, with the goal of reducing or even one day perhaps eliminating microfibre pollution.

Moulds for the microfibre catching Cora Ball are now on order with a patent pending thanks to an 11th Hour Racing grant. The project also received grant funding through Schmidt Marine Technology Partners, to help develop and promote the Cora Ball.

Above: Dodge Morgan drew acclaim from around the globe when he became the first American to sail solo and unassisted around the world in 1986; in fact, the 54-year-old entrepreneur was still only the fourth person of any nationality to successfully complete the feat (it would be another three years before the first Vendée Globe ran in 1998/99).
Below: a prototype of the Cora Ball developed by the Rozalia Project – in a machine wash the ball ‘acquires’ the tiny fleece particles that would otherwise flow off first into the waterways and then into the oceans themselves 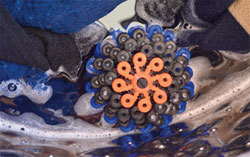 This backing in turn prompted a Kickstarter campaign to raise further funds for manufacturing. Launched on 18 March, the initial $10,000 goal was reached in three hours. As this article went to press more than $176,278 has been received from more than 4,000 different people. ‘Rozalia’s Kickstarter success is a perfect example of organisational sustainability,’ says Rob MacMillan, 11th Hour Racing co-founder. ‘This is an important feature of the programmes that we fund through our portfolio of grants.

‘They connected the dots to get the Cora Ball into production and we were able to get answers to all the important questions; we also had access to a wide range of relevant resources, from injection moulding to IP lawyers,’ says Miller.

OVER THE HORIZON
Meanwhile, the Rozalia Project and Miller are not resting on their laurels as the Cora Ball moves into the manufacturing stage.

The pilot educational programme, Expedition STEM for the Ocean, launched in 2016, will begin again this month with a series of multiple two-week exploratory voyages. Created for young boaters and coastal residents, the goal is ‘to inspire people to become ocean problem-solvers,’ says Miller.

With a primary expedition area in the northeast of the US, and keenly aware of the debris continually washing up on beaches in that part of the country, Miller gives a hint to Rozalia’s next task… ‘Lobster buoys “escaping” from the fishing industry,’ she says. ‘We need to do something about that.’

THE MOTHERSHIP
Rozalia Project is specifically focused on marine debris, from ocean surface to seafloor to seashore. This mission fits with 11th Hour Racing’s broader goal of encouraging sustainable practices and improving ocean health. The four techniques that Rozalia Project focuses on are clean-up, prevention through education, innovative technology and solutions-based research. ‘Sometimes we use one technique and sometimes another,’ says Miller. ‘That’s why each year with Rozalia looks fairly different.’

Since 2010 Rozalia’s expedition platform has been the Ted Hood designed American Promise. The sloop was made famous by Dodge Morgan in 1986, when he became the first American to sail solo, non-stop around the world – and now benefits from the installation of 11th Hour Racing-funded upgrades to its energy production systems.

Besides the obvious benefit of sail power, the boat has manual water systems, a low-emission Steyr Tier 3 marine diesel engine and a suite of solar, wind and hydro powered generators.’

The aim is for American Promise be an inspiration vessel, happy to share data and talk about how solar, wind and hydro power might work for others in the sailing world.

‘What are the big questions around ocean health? How can we apply tactical problem-solving to issues that affect the future of our entire living system?’ asks Jeremy Pochman, strategic director and co-founder of 11th Hour Racing.

‘The ocean is an amazing, intriguing and complex puzzle of different eco-systems and contemplating these issues all at once can be overwhelming.

‘We need to take an innovative and detailed approach – one degree (or item) at a time is how we like to spell it out.

‘To draw the analogy with sailing itself, it’s the small but steady increments in steering that keep you on course.

‘The story of the Rozalia Project describes the programme as a whole: identify challenges, define an achievable set of goals to resolve them, come up with the ideas that will help and then develop these ideas into accessible and practical solutions that are then implem - ented as widely as possible.’

Click here for more information on the Rozalia Project »