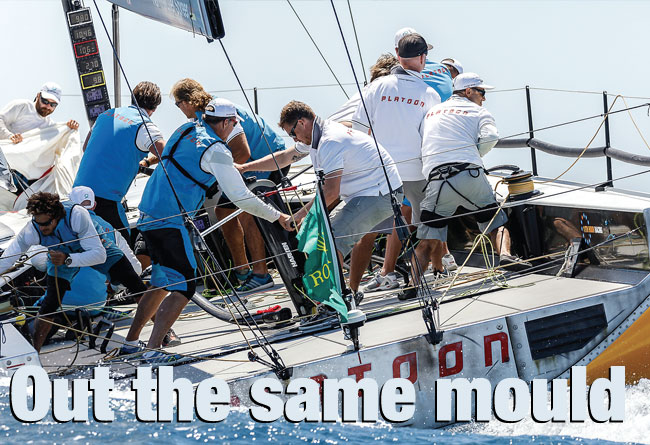 TP52 moulds have been put to good use recently but with a bit added on top. ROB WEILAND

With the 2017 Rolex TP52 World Championship coming up, a decade after the first Rolex TP52 worlds in 2006 in Miami and after so much development of boats and class racing over the years, maybe a good time to weigh in?

A TP52 is of course more than a set of numbers, but then again to get an idea what you are actually looking at or reading about numbers do help. The length overall of 15.85m and beam of 4.42m result in a hull area including the transom of just under 85m2 and a deck area of just under 59m2. Depending on build quality a Nomex cored hull will weigh 500-550kg, a Nomex cored deck 210-240kg and the internal structure just over 300kg. Then taping the lot together plus some items like composite chainplates, stanchion sockets and so on will add another 50kg for a total weight of the composite construction of 1,050-1,150kg.

If not restricted by the TP52 structural guidelines I would say theoretically one can build up to 10 per cent lighter, but either at considerable added cost using ultra high-modulus carbon and optimised Nomex cores or at reduced strength or a very unproductive combination of the two. There is no way one can build lighter, stronger and cheaper by for instance using foam cores as I still see suggested every now and then.

It would be interesting to see whether the use of monolithic laminate used among the Imoca 60s would produce a lighter boat for the same strength and at what cost but as our structural rules do not allow this I never looked into it.

The TP52 structural guidelines, developed in collaboration with DNV-Germanischer Lloyd, produce a boat that in layman’s terms in many areas is above the minimum requirements defined in the World Sailing offshore safety regulations and in ISO 12215 Cat A.

The result today is a boat that we know will not fail its crew racing hard yet is seen by most as the pinnacle of monohull racing. As the 52 Super Series is based around windward-leeward and short coastal races, the layout and equipment of most boats is now tailored to just that. For instance, rig and bowsprit are not set up to carry code-0 type sails on locks and furlers.

To bring a Super Series TP52 into offshore mode you probably want to modify in these areas as well as improve on watertightness as many lines are led below decks and that unavoidably brings water into the boat. The TPs have automatic pumps taking it out again but for offshore use a different balance should be sought.

For frequent use offshore, confronting the boat with long periods of heavy slamming, I feel some structural optimisation should be sought in reducing the unsupported areas in the bow or if designing from scratch to beef these up. Something like 15 to 25kg in added reinforcement is enough to do the trick there.

Below: the first four Pac52s competing in San Diego. Put next to an aero-driven TP52 like 2017 world champion Platoon (main picture, above) the higher freeboard of the Pac52 is the most obvious evidence of a more offshore oriented boat. Foam-core build and a more robust rig deliver a cheaper boat than a TP52 but at the cost of righting moment and upwind performance. However California is a long way from TP52-central – this is a well thought-out locally driven initiative which is at last giving US sailors some new race yachts

We see quite a large spread of internal ballast in the current fleet from about 50 to 300kg for the 2015 build boats, reflecting design and build choices as well as equipment choices. Interestingly what we do not see is that this spread is mirrored in the results in any reliable way. Apparently having exactly the same weight in the extreme ends of the boats (rig and keel) is more important for equal performance than variations in hull and equipment weight of up to 200kg.

This is consistent with what we experienced till 2011 when we were still inclining boats and optimising them to a vcg limit resulting in different keel weights; the performance differences were bigger when the fins and bulbs were all different in weight in order to equalise the boats by vcg.

It is interesting to put the first data off the 2017-built Californiabased Pac52 boats (issue 447) next to the numbers of the 2015- built TP52s racing under the TP52 rule. It is unique to be able to compare boats so similar yet so different in class rule approach. The Pac52 rule effectively returned to where the TP52 rule was in the first decade of this millennium using righting moment and vcg data rather than setting strict rules on weights and vcg of components.

Looking at the first certificates I see that not having class limits (yet) leads to all Pac52s having different rig, sail area and displacement data. How to marry that with racing boat-for-boat is something that will result in interesting discussions. I’m sure that as soon as class limits are put in place all will creep up to those and then the size of the fleet will determine the emphasis on upwind optimisation.

Adopting a rating rule and a TCC limit in your class is an expensive hobby, as with the rating rule one introduces an ever moving target not controlled by the class. As we know from the Ton and ILC classes of the past and of current classes like the Maxi72 and Fast40.

Most Pac52s have a lighter engine and lighter keel fins and most of them have marginally lighter bulbs than the TP52s (by up to 100kg) which has potentially created room to race the Pacs at a lower displacement by about 200kg; so a Pac52 built to a TP52 level of optimisation could be racing at 6,450kg… 200-300kg less than a TP52 (excluding internal ballast).

In reality the raised sheer and foam cores used in construction mean that Pac52s like Invisible Hand and Bad Pak come in at weights only just below TP52 minimum class weight, at about 6,900kg. Only Rio, built more or less to TP52 specs, shows a lower displacement of 6,800kg if I check the calculated weights in ORC.

Their ORR certificates show higher weights for all four of them, time to hang them from a loadcell, I suggest.

The lower keel weight, raised sheer, taller and heavier mast, heavier construction and heavier equipment choices of boats like Invisible Hand and Bad Pak are quite visible in the measured righting moments of the boats – even when Bad Pak battles this with parking its bulb some 0.1m lower with increased draft. Fox comes in at a righting moment of 385kgm, Invisible Hand at 372kgm, Bad Pak at 379kgm and Rio at 378kgm. Super Series TP52s all measure in at around 415kgm with a narrow spread of 408 to 420kgm.

Part of this higher moment on the TP52 is caused by the displacement difference, of course… but only a part.

The taller Pac rigs carry marginally more downwind sail area than the TP52s and the certificates show more jib area than a TP52 at its class max of 66m2. Pac52s vary in jib area from 67.4–70m2.

The rating-driven narrow head main on most Pac52s is, I feel, a bad choice performance-wise. No doubt wide-head mains are a more efficient option whether in light, medium or heavy conditions. If anything the TPs should go even wider than the current maximum.

I guess the Pacs will pick up on this soon and will end up increasing mainsail area or reducing E. Invisible Hand is already at 2m head width. The taller rig is a logical Transpac Race optimization – all downwind so you want to hang as much sail as you can as high as possible. I would rather go lighter with the TP52s and add mainsail top width than adding near 30kg of rig high up.

It would be interesting to race TP52s and Pac52s together in a combined fleet start but I fear this will not be on the agenda any time soon due to our geographic spread. If we were to do it today the TPs would blitz the Pacs in W/L racing in anything over 9kt of breeze (actually the ORC certificates already demonstrate this and without factoring in the TPs’ higher level of optimisation), but the Pacs will learn from racing each other and make good steps in the years to come to find the optimum for their rule and boats.

It will be fascinating to follow their progress, always something to learn. I fear that they are heading towards a rating limit to equalise their differences, with all the associated complications and costs.

But first the Rolex TP52 World Championship in Scarlino. And before that now in Palma for the PalmaVela trying to stay on top of all the optimisations the Maxi72s throw at each other and consequently at me as their class manager. Development never stops – some of it can be annoying at first sight and some of it plain useless. But most of it is inspiring and leads to true improvement. For sure we race better boats now than we did in 2006.
Rob Weiland, TP52 and Maxi72 manager