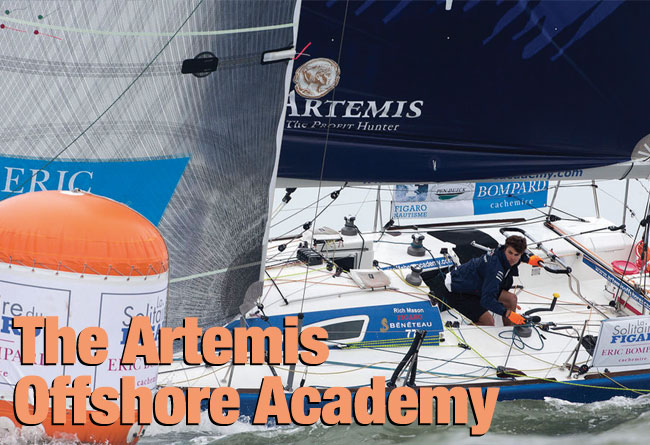 Three years ago the French Volvo 70 was not considered by the ‘establishment’ as a serious contender for overall victory in the Volvo Ocean Race, and the first leg to Cape Town didn’t do anything to help as Franck Cammas’s Groupama came last of the finishers by quite a large margin. Things changed quickly from then on, however, and over the following legs the team started performing, collecting points, winning legs and ultimately Groupama won the race. A quick look at their crew roster didn’t show up any ‘big international star names’ but a closer look revealed not only an impressive number of shorthanded offshore sailors, but specifically no fewer than six veteran Figaro skippers.

Fast-forward three years to 2014 and, of the seven entries in this year’s VOR, how many will have Figaro sailors onboard? At the time of writing it would appear there are Figaro sailors on three boats – Sam Davies on SCA, Charles Caudralier, Pascal Bidégorry and Thomas Rouxel on Dongfeng and the likelihood of as many as four onboard the as yet unnamed Spanish team.

When Iker Martínez and Xabi Fernández got the late green light for their project just weeks ago the first person they called to help them get organised was Michel Desjoyeaux, the two-time Vendée Globe and three-time Figaro winner who had helped the Spanish pair prepare their Open 60 for the Barcelona World Race. Other than for his immense range of skills and offshore experience they wanted Desjoyeaux to help them find the right people to crew their new VO65. Desjoyeaux’s immediate advice was to dip into the pool of current Figaro talent, and from there they have recruited Nico Lunven (FRA) as navigator and offered try-outs to Antony Marchand (FRA) and Sam Goodchild (GBR) as two under-30 sailors.

Goodchild is a product of the Artemis Offshore Academy and at the age of just 24 has just completed his fourth Solitaire du Figaro. Some quick research reveals that in the race’s 45-year history there have not even been a handful of sailors who have completed four Figaros by their 24th birthday – among those who have, names like Alan Gautier and Jérémie Beyou immediately come to mind…

Goodchild was part of the first intake of the Academy four years ago and since that time the Artemis-backed initiative has continued to identify and develop young British offshore sailors. In early July this year no fewer than eight of the Academy’s sailors completed the Solitaire du Figaro course, three Rookie first-timers and five alumni from previous years. For the second year in a row Academy sailors have populated the Rookie podium and the Academy’s approach clearly continues to impress the French solo offshore sailing environment.

Since its establishment the Artemis Offshore Academy has evolved every year as it has grown. From its first efforts in an ‘alien’ environment to today’s refined selection process, optimised schedule and training regimes in the UK and France, and this year expanding to start to train young shore support staff to specialise in logistics, boat maintenance and project management, this is no flash in the pan. The Academy is here to stay and this year its sailors represented almost a quarter of the fleet at the Solitaire du Figaro.

Each year the Academy calls for recruits and following a rigorous selection process places suitable candidates into initial training in late summer. From the first basic exercises of getting a 32-footer off the dock and sailing by oneself in 20kt of breeze, to manoeuvring and handling the two extra systems not often found on regular racing yachts – water ballast and sophisticated autopilots – to lining up with sisterships and getting into advanced sail trim and speed tests, the skippers sail across a far wider range of sailing conditions than your average ‘weekend warrior’ gets to experience nowadays. In parallel there are plenty of courses to attend and paperwork to collect such as VHF licences, sea safety, Yachtmasters, along with plenty of classroom training with specialists in subjects as varied as Adrena navigation software, weather strategies, onboard electronics systems, fitness and nutrition, sports psychology and so on.

Last year four new recruits from dinghy and keelboat environments came through selection and got to sail the Academy’s Figaros in the Solent for 45 days. In January this year three of those went on to dodge the major winter storms and deliver their assigned boats two-handed to Lorient to train with Tanguy Leglatin and the Lorient Grand Large group. From here the programme ratchets up a notch or two and speed tests take on a new meaning. Boat-handling exercises with a dozen boats, tacking and gybing duels, short-course racing around navigation marks, and a big emphasis on the main point of sail encountered offshore, reaching all follow. At the end of each week-long session the fleet sets off on a minutely prepared 12-18 hour coastal race.

March rolls around and the first major regatta, the Solo Maître CoQ in Les Sables d’Olonne, swings into view and sets the routine and the rhythm the skippers will live by for the rest of the year – delivery to the venue, a couple of days of official pre-event safety and measurement checks, weather and routeing briefings with the Academy’s consultant, Christian Dumard, the race start, the finish, the initial recovery, the post-race debrief and then delivery back to the Lorient base or on to the next event.

Before the first race of each year the Rookies always ask what is the best way to prepare for sleep depravation, the one obvious difference this part of the sport asks of its competitors. There is no complete answer to this perennial question until the skippers have sailed some of these events and discovered for themselves how to deal with the excitement of racing a big fleet versus the need to slow down the pace early enough so as not to flirt with the redzone before crossing the finish line and safely bringing the boat home!

The most valuable exercise of the pre-Solitaire programme this year was a week-long 12-boat training sortie that saw the entire Lorient-based group of skippers race past most of the key geographic points on this year’s Solitaire race course. For 2014 it comprised a practice race from Lorient around the western tip of Brittany, around Jersey, the Cherbourg Breakwater and then to Plymouth. This was followed by a day of windward-leewards in Plymouth Sound and then another race around the Wolf Rock and back to Lorient via a buoy off Roscoff. A 700-mile round trip with regular restarts at key points to allow the fleet to always race in contact, and all animated by a couple of coaches riding shotgun and rotating across several of the boats. The beauty and value of this exercise are keeping the fleet close, building up fatigue, simulating race conditions, chatting constantly on the VHF, having coaches around to chat with, and give advice without actually sailing the boat.

The pace and complexity continue to accelerate as the weeks go by and the main event, the 2,000-mile four-stage Solitaire du Figaro, comes into view in June. There is less time to recover between events, further to sail on deliveries, the management of life on the road, the arrival of new sails, an ever-growing number of people making up the team to help keep the boats in tip-top shape, manage food, lodgings and general logistics and of course keeping the social media environments topped up with blogs, interviews, pictures and videos.

The Artemis Offshore Academy’s ultimate goal is to get British sailors into a position where they are viable commercial and sporting prospects with regard to tackling the Vendée Globe, the pinnacle of the discipline. With the first Artemis graduate trialling to become crew in the next Volvo Ocean Race another major step has been taken. Goodchild will come back better for it, richer in experience and a perfect British proposition to competitively sail the next Vendée Globe. Meanwhile, the fifth year of recruits are going through their early initiation and the cycle continues…

Click here for more information on the Artemis Offshore Academy »