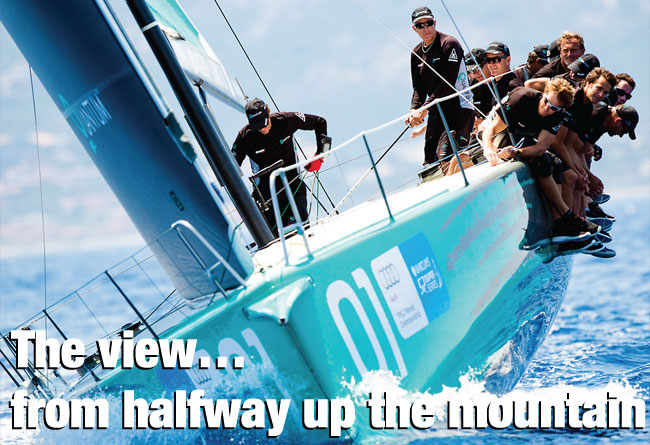 With seven new TP52s already in the pipeline you’d think he’d be satisfied… but there’s so much more to do, says ROB WEILAND

Leg two of the Barclays 52 Super Series, the Audi TP52 Worlds, in the end was three good days of racing out of the five scheduled days. As it is shaping up now racing in the Med this year brings lighter conditions than for the past three years.

But one light year says little about the future. I feel those designing and building new for 2015/2016 surely will go for an all-round concept, also because the 52 Super Series will not just race in the Med. It is very likely that in 2016 we will cross the Atlantic again for Florida or the Caribbean.

Meanwhile, on the Costa Smeralda for the 2014 TP52 Worlds, roles were reversed from Capri between Quantum Racing and Azzurra. Quantum on top and 2014 TP52 World Champion and Azzurra on their home turf nowhere near as confident as during Rolex Capri Sailing Week, just a couple of weeks earlier. Also, great racing from and a well-deserved runner-up slot for the new boat on the block, Phoenix. Tactician Santi Lange is clearly at home on the Porto Cervo waters, with his happy owner-driver Eduardo de Souza Ramos taking home second overall and the World Owner Driver trophy, beating Niklas Zennström and Rán Racing who ended up in third overall.

For the Barclays 52 Super Series trophy this leaves all to play for at the top with Quantum Racing on 33pt, Rán Racing on 37, Azzurra on 38 and runner-up Phoenix on 42. At the worlds we were joined for the first time by the new Italian team led by Marco Serafini and Tomasso Chieffi sailing the 2013 ORCi World Champion Hurakan (ex Powerplay/Oracle). It is always good to see new faces picking up the routine of close racing the 52s so quickly and certainly enjoying it. Nine boats again, as in Capri. Not bad.

As I mentioned last month, Rán is sold and will race as Paprec Recyclage in 2015. Shortly after that Quantum was sold to Manouch Moshayedi of Rio fame, and the interest from Interlodge and Sled to join the Super Series fray in 2015 solidified. Slowly the contours of the fleet that will race in 2015 become visible, with the latest count on new builds at seven… as at 1 July.

It never hurts to relax for a moment. Right now my idea of relaxing is varnishing the wooden rubbing strakes of my tiny open launch, so we look presentable again around the many canals in my home town of Leiden. Varnishing is a constant inner debate about the degree of perfection of the job at hand. Preparation is half the job, they say, more like 90 per cent of the job if you ask me. And as these are rubbing strakes, they are pretty soon going to rub against something less shiny, sure of that.

The degree of control over the running of the TP52 Class or of the 52 Super Series and its events can be put into a nice analogy to the control I have over varnishing my rubbing strakes, but there is a quite a difference between dealing with people and dealing with a rounded piece of wood. The good thing with the people is that you can ask them to kindly co-operate, although it is definitely better to present such a pretty picture that they gladly sign up for the activities on the menu.

The less stressful thing about the piece of wood is that you can get a piece of sandpaper and take whatever hurts the eye down and start again without much drama. It really helps if you enjoy the activity at hand, that’s for sure. Even a piece of wood seems less hostile when you give it some honest care and attention. The 52 Super Series was created by a few people who simply liked what they were doing too much to give it up when the going was tough. I like that, it is one of the principles of yacht racing: never ever give up.

I like too that it was based on analysing what was right and not right about its predecessor, the MedCup, and that we realised and accepted that times had changed. At the time we thought this change was not just for a couple of years and so built the framework of our series around this new reality.

We set off with simple goals such as to go back to the roots of sailing, the private owners and the yacht clubs. We aimed for racing for high-quality trophies in high-quality ‘racing arenas’, as can be found on the doorstep of so many of the world’s best yacht clubs. And we chose to reach out to other yachting communities than just in the Med, like across the Atlantic.

Wherever soulmates can be found, intentionally the 52 Super Series is a global affair. We reached out as well to other classes where synergy could create better events for both. We also soon decided that the pool of pro-teams was too empty to spend much time fishing in on its own, and that the trick would be to bring together the private owners with full pro teams with the private owners with mixed pro-am or even full amateur teams.

Of course we discussed the money it takes to run our organisation and the events. I am still convinced that a circuit sailed, owned and paid for by owners is a mix that is easier to establish and potentially longer lasting than any other mix out there.

Of course there are really dedicated and loyal sponsors in sailing; not to be ignored – besides funding they bring expertise and broaden the horizon, life is not just sailing. The happy mix in which owners and sponsors respect each other and find a good balance between their needs is possible.

So did we achieve all our goals? I feel not yet. Will we get there? Not sure and not sure that would be a good thing. You’ve got to stay on the move. For sure we shall not be tempted to stop pushing for the original goals because of the success that being halfway up the mountain already generates. Relax and enjoy the view can be great short term, but it is not without risk long term…

I am not happy that some of the best trophies in yachting, like the One Ton Cup or the Admiral’s Cup, are not being competed for, gathering dust on a shelf somewhere. We tried to bring them back to life, but somehow the interests we uncovered proved not to be common enough.

I think more ground can still be covered to bring us to more highquality clubs and venues. Travelling is expensive, sure. But racing in different places, different venues, meeting new teams, creates new energy. As we found crossing the Atlantic twice with the 52s.

I am happy with how we managed to keep a wide range of sailors interested in our racing, from good amateur to the highest-level pro. And I am happy that we have a mix of owner-driver and pro driver that most of the time and by the drivers themselves is seen as stimulating. Certainly it is not discouraging ownerdrivers, considering that all the new teams joining us so far for 2015 are owner-driver.

With the number of competitors for 2015 now secured at well over 10 teams for all involved the game changes. On-the-water strategy will change as a clear lane is harder to find, or to protect. On the shore we will need more manpower to give the competitors the same attention, simply because there are more of them. We need more space on the dock and in the water for the equipment. The bigger scale requires a new balance. We have to work out how to keep it personal and for sure how to keep it good fun.