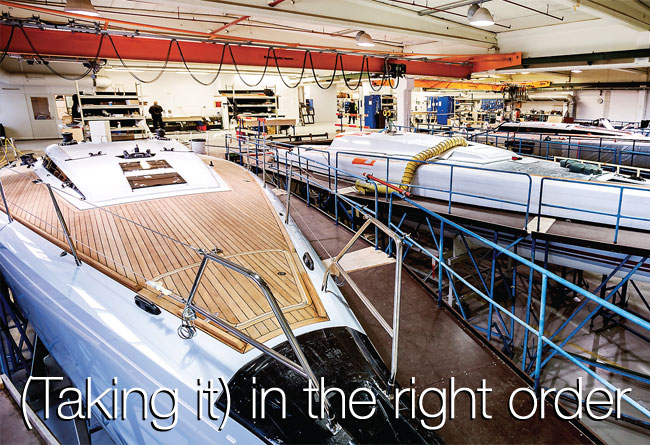 With the launch of the ClubSwan50, Nautor has rewritten the book on how to ensure the best possible one-design racing with a new offshore class

A great deal has happened in Finland since the sea started to freeze over and the sun dipped lower in the sky last autumn. In fact, a lot has been happening since the first three ClubSwan50s appeared at the marina outside the Yacht Club Costa Smeralda back in September 2016 for the Rolex Swan Cup.

In most cases when a new one-design is developed there is little time or drive to improve on the boat after the first examples hit the water. The incentive is simply to fill the order books based on that first impression. While first impressions of the ClubSwan50 were all extremely positive, Nautor, along with the ClubSwan50 steering committee, saw potential to not just produce a good boat out of the box, but to spend a little time and make it really stand out from the crowd.

So rather than accepting that the first boat and the 20th boat would all be tied to the problems that are only found with the benefit of a proper shake-down, Nautor took the opportunity over the autumn and winter to work on and refine the ClubSwan 50 based on the input of the designers, Nautor experts and professional sailors.

Following on from this process refinements were made, focused on making the boat easier to sail under a strict owner-driver rule and further enhance overall performance. Many of the changes are subtle, like tweaks to the sail dimension limits, all based on the standard World Sailing measurement methods used by both ORC and IRC.

Main picture: When launching a new offshore one-design there will always be conflicting priorities of getting the boat absolutely right at the same time as ensuring that the final product is practical for one-design manufacture. In the case of the ClubSwan50, Nautor took the pragmatic step of accepting that post-launch changes would be needed if they were to offer the best possible boat. But then, before the final product and class rules were set in stone, they brought back all the early boats to put them into exactly the same final spec. A lot of extra time and money, but if you want a new one-design to remain onedesign it’s really the only way… 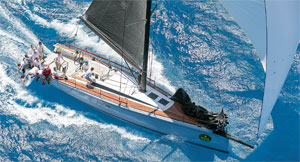 Above: Perhaps the most significant refinement to the CS50, once the first few boats had been thoroughly trialled and tested (above), was to take advantage of a gallery in the keel bulb, adding ballast and increasing righting moment, at the same time as shaving a few kilos off elsewhere to compensate. All new boats are delivered in this revised configuration as standard, while previous CS50s have all now been uprated to match. Note the racy carbon keel fin (below). 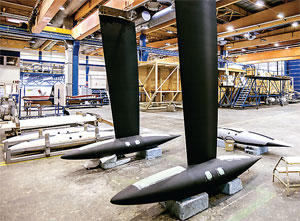 For example, some will say that removing the teak from the cockpit floor is ‘not very Swan’. But the decision was based on making the boat work better, not reducing cost or weight. The CS50’s powerful hull form works best upwind when the chine gets a chance to really dig in – at a higher angle of heel than your typical cruising yacht. It was found that the teak used was simply not providing the grip needed in the wide cockpit. Rather than seeing boats sporting grip tape covering the teak and ruining the look, the decision was made to provide a more functional solution from the yard, removing the teak altogether. There is the nice side-effect of reducing weight. In that respect it is rare that a one-design meets its original concept design weights.

The winter months have been spent reviewing every single component as well as the build process itself to ensure that not only is the finished weight correct, but it is distributed where it is wanted. To achieve this, all boats are weighed in various stages through the build, and the main components are all carefully standardised. For example, every keel bulb is weighed and corrected to exactly the same weight before the carbon keel fin is installed. The suppliers for the main components, such as the bulb, fin, mast, boom and so on, all provide a declaration with each item that arrives at the Nautor yard so that compliance is established before these items go anywhere near the finished boat.

It is also recognised that many competitive teams will take a boat fresh from the production line and, before it even gets wet, go into a shed and fair the hull and appendages for themselves. Rather than take the impossible-to-police attitude of prohibiting this, Nautor’s solution has been to remove the incentive – that is, the potential benefits. Every hull is finished and painted after it comes out of the female tool and little else is really needed. The rudders and keel fin are each built in extremely accurate CNC-machined tools so that the surface only requires paint, not fairing. The keel bulb is first cast, then CNC machined to ensure absolute consistency of shape. Only a small range is needed in the bulb corrector weight pocket to compensate for the small variations in the lead density that are unavoidable when casting.

So whereas the boats seen and tested in Sardinia may have been almost down to the design weight, those pockets in the keel bulb were filled with a lot more foam than was wanted. With the diligent work of the build team in Finland, and the ongoing support of designer Juan Kouyoumdjian and his team, not to mention the commitment of class president Jochen Schümann, the standard ClubSwan50 has gone up a gear from when the boat first appeared. Righting moment is now higher, control is up and overall performance is hitting the mark.

The most important element here is that this full review of the boat has allowed Nautor to establish even tighter controls on the manufacturing process to ensure that the boats all come out within a very tight weight range. Not only this, but the righting moment and trim characteristics are also tight. The result is that Nautor has the confidence that the class will produce not only exciting sailing, but genuinely one-design performance.

So the post-launch review not only led to a reduced sailing weight, it narrowed the room for variances or indeed error. The whole process will produce a much closer class than would otherwise be possible.

The next step is to bring the existing boats in line with these new, tighter limits. That is no simple task, but it will be achieved with a return to Nautor for a refit. That has been in mind ever since the approach was first considered, and all changes have been based around not only making these boats measure but also perform equally.

The next question is what may be done to the standard boat. Everyone has their own preferences and requirements. Unlike with a pure raceboat, there are additional elements to consider for a Swan – and this goes beyond simply selecting the colour. The company has pinched a protocol here from the car industry and only permit options that are available direct from Nautor. If what you want isn’t available in the options list, then you are out of luck.

The advantage is that Nautor knows the exact weight and trim effect of every option and they are either designed to be removable for racing, or weight adjustments can be made to compensate for them being in place. An extra complexity, but this is a Swan.

The ClubSwan50 Class rules are based on a standard World Sailing format and, using the final boat weights, they incorporate the tight controls now being applied. These rules will be sent to World Sailing with the objective of the class being approved as an International Recognised Class in November. By that time there should be easily enough boats on the water to meet the World Sailing requirements, so plans for a world championship in 2018 can be set in motion.

For 2017 the grand finale of the ClubSwan50 racing programme will be the inaugural edition of The Nations Trophy, which will take place in Palma from 10 to 14 October, where a minimum of 10 ClubSwan 50s are expected to participate.

All looks positive for an exciting first season. The structure is in place for a full, longterm race schedule and a class that can become well established and provide exciting racing in fleets all around the world in coming years.

It is rare that a new one-design class plans ahead in as much detail as ClubSwan50 has. In this case the class management team, including Jochen Schümann, Enrico Chieffi, Ettore Mattiello and Claudia Tosi and Volvo Ocean 65 manager James Dadd, have been involved since very early on. This means that different views and requirements have been on the table when decisions are being made, not after the case. Such advance planning sets this new class in good stead for the future.