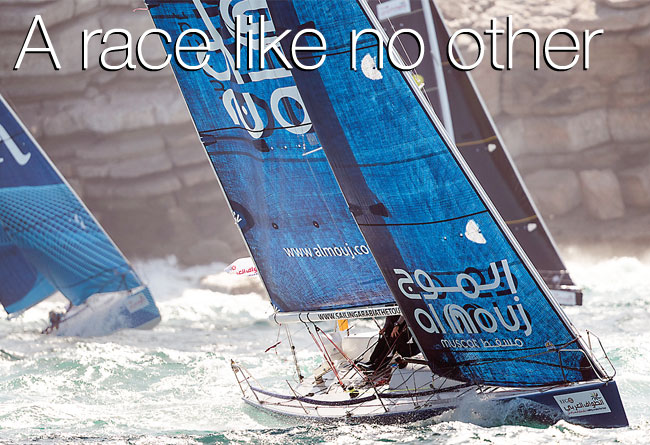 You could be chilling (literally) at one of Europe's mid-winter regattas or you could be enjoying sparkling and warm one-design racing... your call

Exhausted but still buzzing after racing 150nm down the stunning coastlines of Oman and the UAE, Caterina Nitto is enjoying some downtime at the halfway point of EFG Sailing Arabia - The Tour. With a day to spare before the action kicks off again, the Italian sailor finds herself at Abu Dhabi’s Sheikh Zayed Grand Mosque. Tranquil and serene, it’s a world away from her busy life as a professional sailor – perfect place to reflect on the first few legs of a unique regatta.

‘The best thing about this race is the mix of cultures and religions, and the adventure,’ she says. ‘We might all be from different backgrounds but we share the same passion for sailing.’

One week in and Nitto is fast discovering the ethos of EFG Sailing Arabia - The Tour: five offshore legs totalling 763 miles raced on identical Farr 30s around the Arabian Gulf, offering thrilling competition for the international crews while showcasing the very best of the region.

Nitto’s Sardinian Adelasia di Torres team, owned by Renato Azara, was among a fleet of eight international teams that set out this year from Oman’s capital city Muscat, heading north to pitstops in Sohar then Khasab on the stunning Musandam Peninsula. From there it was south to Abu Dhabi before the two longest legs to Doha in Qatar then returning to Dubai, with three rounds of inshore racing thrown in to spice up the mix.

The line-up was as diverse as the countries and cultures they experienced. Two crews from Oman, Al Mouj Muscat and Team Renaissance, went up against rivals Zain from Kuwait, DB Schenker from Germany, Team Averda from Great Britain, Bienne Voile from Switzerland, Adelasia di Torres from Italy and title holder EFG Bank from Monaco.

Main picture: It is surely inevitable that more European sailors in particular will soon wake up to the enormous and diverse appeal of a one-design regatta held in one of the best one designs ever invented, competing over a mix of inshore and offshore courses, around a coastline like no other… and once ashore then sampling a fascinating, historic and completely different maritime culture offering unparalleled levels of hospitality. Naah, on reflection it’s much more fun frostbite racing somewhere like Annapolis or Kiel… Really? 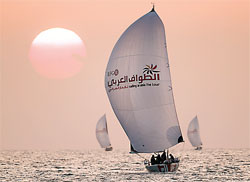 But there were also plenty of amateur sailors: physicists, architects, physiotherapists, business leaders, students… all enjoying the chance to go head to head with their heroes in the inshore and offshore disciplines. No wonder, either: the warm waters of the Arabian Gulf and temperatures of 25-30°C combine with stunning scenery to make EFG Sailing Arabia - The Tour an attractive alternative to European winter sailing.

Raced in Farr 30 one-design yachts that can be chartered from race organisers Oman Sail, teams compete on a level playing field for the Tour trophy. This year’s race boasted a strong Omani contingent thanks to the work of Oman Sail, a national initiative to reignite Oman’s maritime heritage.

EFG Sailing Arabia - The Tour veteran and Oman Sail offshore success story Fahad Al Hasni led Omani-crewed Team Renaissance, a team determined to finish on the podium after missing out by 1pt in 2016. Al Hasni has competed in every edition of the regatta since its inception in 2011, first under the mentorship of French sailing star Sidney Gavignet before working his way up to leading his own entry.

The 2017 race also saw the welcome return of an all-female crew, a feature of the event since 2012, this year in the form of DB Schenker with a mix of Omani and European sailors.

EFG Bank Monaco, winners of three editions prior to 2017, started the regatta as hot favourites despite the absence of their injured skipper Gavignet, and they didn’t disappoint. Under the stewardship of Thierry Douillard they claimed their fourth consecutive title, winning four of the five offshore legs and one in-port series in the process despite an epic battle with Omani crew Team Mouj Muscat.

But it wasn’t just seasoned pros on the podium in February. After moving up through the rankings with each leg, Nitto and the Adelasia di Torres crew rounded off their first EFG Sailing Arabia - The Tour with third place in the final stage. ‘Finishing on the podium in the final leg was proof to ourselves that we have a good crew and if we do our best we can be on the same level as the other teams,’ she said. ‘This has been a great experience, especially the spirit of all the teams. We’ve shared a lot and everyone has been amazing – always smiling, always having fun. I will have a lot of stories to tell my friends.’Nitto is already planning the team’s return in 2018.