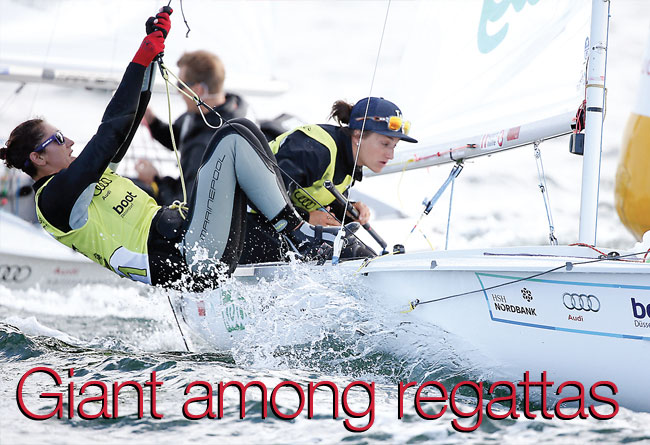 Forty-five years after it was built to host the 1972 Olympic Regatta, Keil Schilksee remains host to one of the best-known regattas on the planet

Just around summer solstice the Baltic Sea will once again draw the full attention of the sailing world. When the legendary Kiel Week opens on 17 June it will not only be one huge waterfront festival for approximately three million visitors from all around the globe. More importantly, at its heart, one of the biggest regattas worldwide will now be revitalised with a programme finally befitting its former fame.

Main picture: While Kiel maintains its reputation as a core event for Olympic classes like the Mens and Womens 470 it is also a very important regatta in terms of underpinning the strength of the many other dinghy and keelboat classes that are popular around the Baltic and which also compete at the event. Adding yet another dimension this year Kieler Woche plays host to the 2017 Para Sailing World Champ -ionship. And then there are the offshore and big boat races... all held in the same period!

‘Kiwo’, as Kieler Woche is often dubbed, has seen all the big names at the startline over the years – from recent superstars like Peter Burling and Blair Tuke in the 49er class and America’s Cup team leader Ben Ainslie, to Robert Scheidt, Jochen Schümann, Torben Grael and Dennis Conner, to name just a few.

Kiel has always been one of those go-to events on the sailing calendar: you simply had to race and better still win here in the usually windy and variable waters off former Olympic playground Kiel-Schilksee at the entrance to the Kiel fjord.

The Notice of Race for the 135th edition boasts a variety and relevance rarely seen before. It includes, among others, the first competition in the new Nacra 15 class, the 29er Eurocup, the European Sailing Series of the Melges 24 and the Para World Sailing Cup – along with the full line-up of Olympic classes. The sheer quality of the event underlined not least by the excellent live video coverage made possible with the help of premium partner Audi.

President of the World Sailors’ Association Kim Andersen says Kiel is the perfect venue, having organised numerous excellent sailing events in the past. ‘With our mutual commitment and the support of our partners we want to get the biggest possible attention for the Para World Sailing Championships. Kiel is the ideal partner for that,’ said the 59-year old from Denmark.

‘Kiel is a very good partner,’ agreed Heiko Kroeger, who won gold and silver in the 2.4mR at the Paralympics in Sydney and London. ‘My own Paralympic career may be over because sailing is not part of the Paralympics any more, but high-class regattas, especially in Kiel, remain on my schedule for the future,’ said the 50-year old, announcing his entry to Kieler Woche 2017.

‘Kiel is exemplary. Even if it means a lot of work for the organisers to host the Para World Sailing Championships in Kiel, it is the right decision.’

In fact, demand was so big that the organisers had to turn down a couple of classes – and this is a problem likely to continue. Mid-term between the Rio and Tokyo Olympics next year Kiel will even host the World Cup finals, putting it once again on the calendar of any top international athlete.

‘We want to set the standards for the future,’ says a confident Dirk Ramhorst, head of the organising committee. He is sure Kiel Week will draw ‘a lot of attention in many different ways’ – even big boat and club racing will be given a lift.

The logo for the event (above), showing an artist’s view of different keel shapes and alluding to the fact that Kiel and keel are homophones, may be a telling symbol. After nearly a decade the so-called ‘Eel Regatta’ – a longdistance race for pros and amateurs – will be part of the programme once again.

So it’s not just at the top that it’s setting the pace: Keel Week is expanding its reach as well.