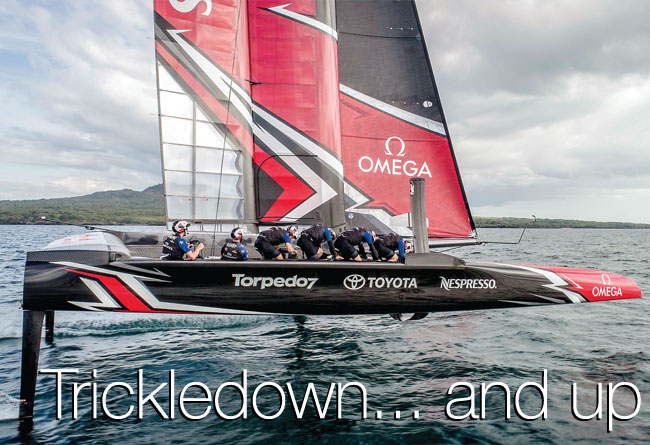 For those on the cutting edge of technology the shift in platform choice to wing-sail catamarans in the America’s Cup may have reduced the number of sail-handling systems to develop, but it has created new opportunities for innovation in hardware solutions across a multitude of entirely new applications. Foil and wing-control systems, for example, have been designed, fabricated and evaluated for the past two years and more, with this year’s start of competition being the final test for their efficiency, reliability and ultimate contribution to performance.

The Emirates Team New Zealand squad are famously uncompromising on demanding the best from their equipment, so it’s no surprise that their relationship with UBI Maior Italia has evolved to be an even tighter fit. Development is more than just a process at Maior Italia, it is an inherent part of the culture at this small producer of custom and semi-custom hardware – focused exclusively on meeting the high demands of highperformance yachts.

The process starts with describing the system and its load parameters, and from here the company’s technical team go to work developing 3D models of the new product through the use of specialised CAD software to use a finite element method (FEM) approach to optimise dimensioning, well before the production of the first prototype. This helps define the parameter space and all the material choices for the job at hand.

Main picture: it’s not a bad test bench when equipment developments get to be road-tested by Team New Zealand on their ACC raecboat – it also shows a fair degree of confidence by the team in UBI’s product at this stage of the Cup cycle when downtime is particularly costly. Those who’ve watched the movie Cool Running, about the Jamaican bobsleigh team, will immediately spot an affinity to the new Cup crewing arrangements

Above: FEA stress analysis of a UBI roller pulley. By carefully matching the different mechanical properties of the rollers and the races the internal stresses are kept evenly distributed and remain uniform up to maximum design load and rotation speed. And an exploded view (below) of a full titanium tulip sheave. This X-Bearing system allows the lateral loads to be carried by the conical rollers again ensuring smooth high speed and high load performance. This sheave has been designed for the gennaker system onboard the latest WallyCento, designed by Mark Mills with styling by Pininfarina

It starts with innovative design
The physics of how blocks and rollers can handle on and off-axis loads approaching breaking strengths, the deformation of materials under load and the minimising of friction in the system is not simple, and to understand these forces is essential to designing optimised to these loads.

The UBI technical team model the physics, beginning with an Excel spreadsheet and back-of-theenvelope calculations. Once an outline has been made, more advanced models and software are used, such as UBI’s in-house 3D FEA analysis and automatic parametric optimisation software, to investigate the behaviour of the rollers and bearing races at microscopic levels.

The initial assumptions and predictions are then tested in practice, building simplified models and mock-ups and performing load and life tests. The results are fed back onto the design board and a new design loop is executed. This continues until the requirements are met.

As this is a custom process the design chosen has to represent the most efficient and reliable method of load transfer within the available operating space. Optimal dimensions and attachment methods are also considered.

Every choice is usually a tradeoff. For example, while a stiffer and more robust sheave suffers less deflection under load, thus providing less friction, it will also necessarily be heavier.

As Emirates Team New Zealand’s timeframe was so short for both the racing itself and the maintenance schedules of the shore team, a higher-grade carbon fibre/ptfe-PEEK material has been used on some rollers. This material allows higher loads and less friction than normal but has a shorter life because it is more sensitive to fatigue. In this environment, where every system is lubricated and inspected after each sailing, it is possible to push the boundaries.

Likewise, the choice of the exact ball race diameter, built to within tolerances of a micron, is very significant. A larger groove or race will allow the sphere to deform more under load, but it will also provide a smaller contact surface with the ball, causing a sharp increase of pressure. In contrast, a tight-fitting groove/race will provide excellent support on a large portion of the diameter of the ball, but any deflection of the sphere will make it squeeze out of the groove, probably prompting a catastrophic failure.

The material difference
Once a design has been chosen that best meets the demands of the system, materials are selected that match the load, strength and weight requirements, and for the America’s Cup only the best will be acceptable.

This goes not only for the grade of alloy used, such as 6082-T6 aluminium, but the finish materials on each part. On some sheave parts, for example, Maior Italia opt for a material that outperforms the typical hard-coat anodising with a super-hard silver oxide anodised surface that they have sourced from a food service equipment supplier based in Bologna operating a system under licence from the Japanese patent holder. Its gold colour distinguishes this from other surfaces.

Viewed with an electron microscope, the anodised surface is formed of thousands of microtube-like structures. These tubes of hollow aluminium oxide are filled with silver ions, resulting in a higher hardness (from 550 to 650+ HV) and a friction coefficient one-sixth that of conventional hardcoats (from 0.15 to 0.025).

Torlon comes in different flavours and is a good material for roller bearings. It can be natural, reinforced with glass or carbon fibres, loaded with Teflon to decrease friction or with graphite nanoparticles to increase the hardness and wear resistance. As often within any plastics material, mechanical properties vary wildly depending on composition. Torlon can have a tensile strength from 120Mpa to 225Mpa for the most sophisticated composition, so there is quite a margin to work with here as well. After being press moulded, Torlon parts undergo heat treatment for one month in an oven at around 260°C to further harden the surface.

Often it is not enough to simply swap materials in search of higher performance. The material and dimensions of the rollers and their races have a significant non-linear effect on each other depending on deflection, stiffness, surface hardness, friction coefficient and so on. A stiffer or harder surface will increase the contact stresses in the roller; likewise, if the roller is too stiff compared to the race, it may cause micro-cracks and holes to form, which will destroy the bearing.

Fabrication and testing
Whether parts are custom or semiproduction, computer-controlled high-precision machinery is used in manufacturing UBI’s prototypes, which are then tested in a booth at maximum working loads as well as at break strength. The resistance of the materials to marine corrosion is verified in parallel by testing samples subjected to continuous saltwater exposure.

For parts intended for production, the manufacture of every block, furler and connector is undertaken with precision machinery controlled by software in accordance with ISO 9001. Every single unit produced is then tested to ensure that UBI’s high quality and performance standards are met.

Putting the pieces of this approach together for Emirates Team New Zealand in their wing and foil systems yielded some fascinating solutions to the unique needs of an AC Class catamaran. While all the details cannot be discussed yet, the first and foremost request from the team was light weight and, maybe even more importantly, low friction. The resulting products included a variety of solutions such as the use of double ball races. The general trend has been to provide blocks to reduce the specific loads on the rollers while producing the least friction possible.

It is envisioned that these parts developed for Emirates Team New Zealand will in due course be applicable in a wide variety of both multihull and monohull systems. For example, the latest Wally Cento's blocks employ some interesting new pin load bearing configurations. Up until now sheaves have used a main bearing pin that attached them to the hull or the mast, and an anti-rotation pin to prevent the rotation of the inner race on the main pin. But using a new triple-pin configuration UBI are able to provide both the load-bearing and the anti-rotation feature in a single homogenous package, in the meantime spreading the load over a larger surface… the result being lighter systems with stiffer blocks.

‘There is no better atmosphere for innovation than the America’s Cup, where we are free to explore all possibilities to get the best possible solution,’ says UBI engineer Vieri Abolaffio. ‘Our collaboration with Emirates Team New Zealand has been both interesting and stimulating and we’ve enjoyed working with them to develop their wing and foil control systems.