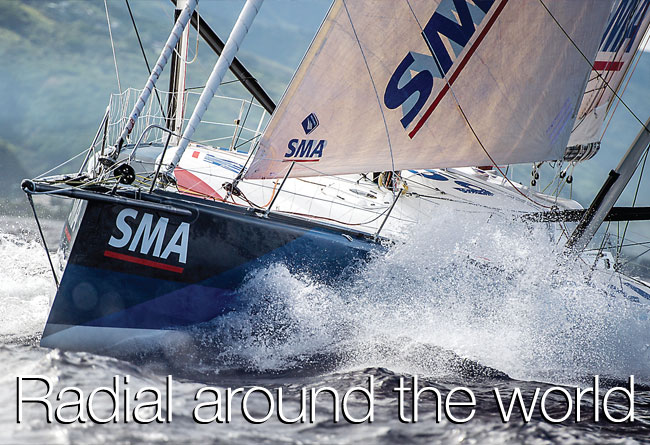 With a seven percent rise in turnover last year, near-maximum production, an unblemished Vendeé, renewed confidence from the boatyards... and an expanding DFi range, Incidence Sails are on a good trajectory for 2017

The Vendée Globe 2016 is about to come to an end, and for Incidence Sails – the first French sailmakers, now returning to offshore racing – this record-breaking round-the-world race was a resounding success. Six competitors were equipped with Incidence sails: Eric Bellion (Comme Un Seul Homme), Arnaud Boissières (La Mie Câline), Bertrand de Broc (MACSF), Morgan Lagravière (Safran), Paul Meilhat (SMA) and Rich Wilson (Great America IV) – and no one had problems with any of their sails. Three of the boats, SMA, Safran and Comme un Seul Homme, had foresails made in DFi and were very happy with them.

Main picture: Meilhat sails SMA into Tahiti after a keel problem in this year’s Vendée Globe. But there were no issues with Meilhat’s Incidence inventory, specified by his manager and two-time Vendée winner Mich Desjoyeaux – Meilhat had comfortably led the non-foiling ‘division’ through the Southern Ocean

‘The results from this Vendée Globe and indeed from the whole 2016 season are very positive, at all levels, as far as my sails are concerned,’ explains Paul Meilhat, who had a superb race. Always in the top five, he was in the top three at one point, until his forced retirement two-thirds of the way through the race.

‘In terms of the choice, shape and type of sail, Incidence Sails did just the job for the Vendée Globe. We decided to go with a large J1 and a staysail, without a Code 0, and it was a very good choice. The J1 and J3 were made from DFi, which held very well – I didn’t have any problems with wear. The DFi really does bring more lightness and shape. I will reuse my DFi sails for the coming season, and we will make new flat foresails. The J2 and the GV were made from D4 as we had agreed with Incidence not to use DFi for the mainsail, and this also worked very well. I had absolutely no problems with any of the sails.’

Eric Bellion was equipped with a test gennaker designed in DFi-radial, a new material used for downwind sails, which completely fulfilled its requirements of: reliability, budget and keeping its shape. ‘I had no problems with the sails throughout this round-theworld race,’ he said. ‘They are all in very good condition, and I could have continued sailing for much longer. I loved my gennaker in DFi-radial; I used it all the time in the South Seas – well, almost all the time. It worked brilliantly. It’s still as good as new!

‘The work with the Incidence team was great – they were always responsive and helpful, and our design brief was respected. I came to La Rochelle and I was able to meet everybody. It has all been very positive!’ announced the skipper of Comme un Seul Homme.

Immediately after this roundthe- world test there was a close inspection of the gennaker: ‘The results are extremely positive,’ says Maxime Paul, head of Incidence Sails’ design team. ‘Eric got a lot of use from his gennaker, but it's still in very good shape. In fact, all of his sails are ready to use for another round-theworld trip!’

DFi-radial extends Incidence Sails‘ DFi range. The material, produced in panels, can be worked as a conventional fabric and used to create relatively hollow sections, which would not be feasible for sails made in one single piece, in oriented fibres. DFi-radial is produced in rolls, so the production is more economical than that of a sail made from made-to-measure membrane.

‘The DFi filamentary membrane has allowed us to regain the technical level we had a few years ago. It clearly adds value and enhances the quality of work for the entire R&D team,’ concludes Philippe Touët, sales director for Incidence Sails Group.