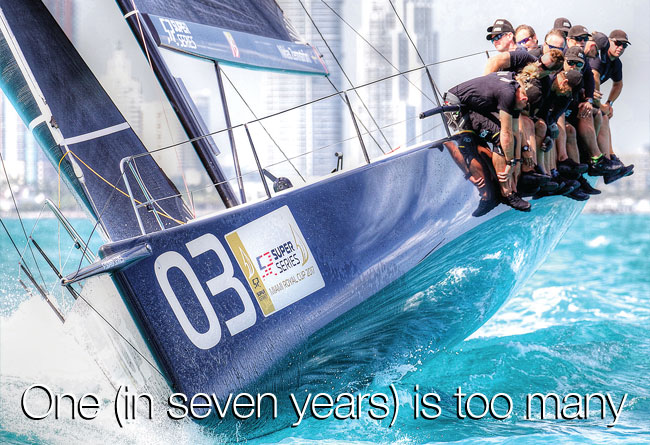 It’s been a long time since there was a serious coming together between TP52s. ROB WEILAND

It was not my plan to write about TP52s for this month’s issue but not to mention the collision between Sled and Gladiator in race two of the 52 Super Series Miami Royal Cup when you just witnessed the damaged boats coming in is difficult.

The TP52 organisers cover all the bases… so naturally round two of the 2017 Super Series in Miami had perfect conditions with Azzurra (main picture) winning comfortably to take the series lead as the fleet heads to Europe. Peter Holmberg is now driving Ergin Imre’s Turkish entry Provezza (below) which after a fourth in Key West maintained her consistency to finish third in Miami in spite of being the only boat in the top six not to win a race 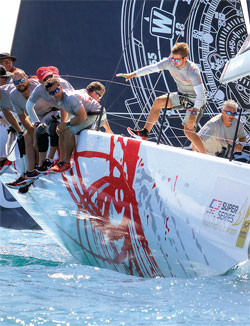 Ever since September 2010 the first beat of the final race at the MedCup event in Cagliari, when All4One failed to duck Bribón and crashed into her, we have not seen a crash of anywhere near this magnitude. The Gladiator-Sled incident is amazingly similar to the one in 2010. In Miami the waves were bigger, Sled was travelling a bit faster and landed more on top of Gladiator – in fact, she did not even break her bobstay whereas in 2010 All4One had her bobstay slicing through Bribón as a wire through the cheese till the bobstay finally gave way.

The impact this time was such that the runner winch with half its pod came off the deck of Gladiator and Sled kept going far enough into her for her bowsprit to just miss the legs of ownerdriver Tony Langley and rip the starboard steering wheel from his hands. This was only the boat’s second race, after changing ownership and going from Interlodge to Gladiator. A bad day at the office for both teams is an understatement.

Once back at the dock, some of the crew still visibly shaken, all involved got on with what needs to be done in such circumstances; and once I had the time to reflect on what just happened, four or five hours later, my first sentiment was to be proud of how calm all remained and how quickly plans were made and set in motion.

There is much negative writing about pro sailors ruining the sport but here I saw only determination to sort the situation in the best possible way and not waste time on what could or should have been. There were no raised voices, no heated debates, no fingers pointed – impressive. The owners had a short chat on the dock, what do you say?

Gladiator will need substantial surgery to be as good as new again. I imagine a new and large part of her port hull will have to be built and then joined with the boat, once it is determined how far the damage stretches and where it is best to make the join. You want a boat back of the same shape, strength, weight and stiffness.

With modern techniques this is possible. Amazingly Gladiator is the one team with a ‘spare boat’ as her predecessor has just been put on the market after competing in Key West. That same night part of the crew went to West Palm Beach to put the rig together and in under 24 hours the B-boat was ready to race. And race she did: as if to show she was as worthy as her successor, the red beast recorded a scoreline of 6,7,2,9,6. Which, combined with a redress score of 6.2pt for each of the three races missed, left the team in 7th place overall for the 52 Super Series Miami Royal Cup. Not bad under the circumstances.

With Paprec Recyclage losing her mast during the training days in the steep chop off Miami Beach, possibly as result of a fitting or the headstay itself giving way, this was not exactly the casualty rate we are used to. Both incidents should not have happened but they did. Gear breaks every now and then and humans make errors.

The Super Series fleet surely leads the way when it comes to maintenance. Each team makes its calls on when to replace heavily loaded items and rigs are visually checked every day.

I guess it is no coincidence that the 2010 All4One-Bribón collision and the Sled-Gladiator incident are very similar. There seems to be a blind spot on these port-starboard approaches with all crew in race position but with not enough nearby traffic to justify a permanent lookout in a less efficient crewing position.

The right-of-way boat, if she is aware of the other boat, will first think that the other boat will duck and all of a sudden a situation goes from daily routine to out of control. You try to duck but no way if the trimmers are not ahead of you and then, when already too late, a likely reaction is to steer for a tack as a last option to bring the boats less square to each other.

I had all kind of ‘what if’ reactions, like mandating bigger rudders and umpires intervening earlier on aggressive sailing, but in this case, as in 2010, there was plenty of room to manoeuvre and no intent or wish to be aggressive and no size of rudder is going to help you if the trimmers are not already onto it.

I can imagine that using the tracking system we could work on the navigators getting a warning signal on their screens for craft on a collision course within something like a 10-boat length circle, but this needs some further thought for its other implications. These boats are very often racing within this distance and this should not start replacing visual awareness.

Part of the modern world is that videos of the incident are all over the internet within hours. Good fun of course but quite often not that great if you are involved directly. One crash can wipe out the image built over seven years of hard work by many people to bring close but safe racing.

Crashes of big boats are more spectacular than of their smaller sisters and should thus be rarer and preferably avoided at all. This one nobody saw coming till too late, luckily nobody got hurt. It is now a matter of getting the damage repaired properly and indeed seeing whether, in any shape or form, there is a need to address how we race without overreacting.

Apart from the damage we saw some great sailing over a wide range of conditions in Miami. Once the dust had settled the podium was made up by first to third Azpurua, Platoon and Provezza. Only Platoon was also on the podium in Key West, so we are very far from knowing clear candidates for the overall Super Series this year. Next is the Rolex TP52 Worlds in Scarlino, 16-20 May.

A complicated way to get one of our new sponsor’s timepieces, easier to buy one but less fun of course!
Rob Weiland, TP52 and Maxi72 class manager