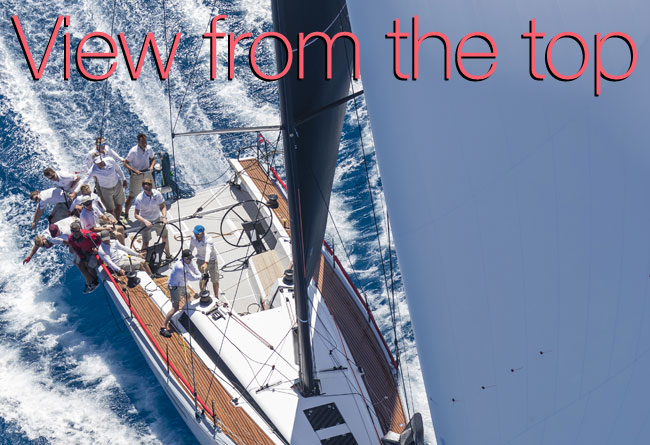 EARLY DAYS
I sailed up to the age of 20, including extensive cruising on-board my family’s boat. My first Swan was a 441 (Ron Holland design) followed by Swan 45 Earlybird, and most recently a ClubSwan 50.

After many successes in the Swan 45, I became interested in fast, planing boats. I purchased a Soto 40 and sailed in South America and the Med but then the class collapsed in Europe so I sold the boat and was looking for something new, ideally a combination of the Soto 40 and Swan 45. At the end of the day I find the concept of the ClubSwan 50 to be magic.

THE BOAT
In the very first presentations two years ago at the Copa del Rey, I wasn’t sure if it would sufficiently racing oriented… I also had to get used to the reverse bow and I asked for a lighter displacement, deeper keel, carbon fin and a few other things that have since been changed. For example, my opinion always was that she needed to be more a racer than a cruiser: I want the chance to beat the TP52s. I said that if you build an 8 tonne boat I’ll buy it: we are now between 8.1 - 8.2 tonnes with the heavy bulb!

SAILING FIRST IMPRESSIONS
Here (at the Rolex Swan Cup Caribbean) we have had perfect sailing. Ideal wind conditions and it is warm.

She is a new boat for me but I find her extremely agile. She is extremely dynamic, in fact behaves like a big Soto 40. She accelerates downwind and is extremely easy to steer and control. The twin rudders provide big advantage downwind and make it easy to keep on the edge. Also upwind we have been averaging 8.5 to 9 knots. We hit 20+ knots downwind and average 18 knots. She’s very safe, very easy. Gybing up to 15 knots is easy, over that is exciting, if you do it with not enough power the boat slows to 12 knots. I’m considering the pedestal grinder for this reason.

The ClubSwan 50 is very different than the Swan 45. The primary difference is that the boat is much faster but also more sensitive and unforgiving to steering mistakes. It accelerates fast, while the Swan 45 takes more time, but if you are out of the angle with the ClubSwan 50 she can slow down easily.

Tacking also needs more attention, you need to tack faster and be careful. It has its challenges and upwind helming is more demanding. All in all, she feels safer and faster. She has fulfilled my hopes.

THE CLASS
Racing in One Design will help us to optimise the boat – because you never have an excuse. Likewise, how we sail she will improve quickly the boat in the years to come. If we are not sailing as fast as our opponent, we will keep trying to figure out why. That steps up the level in the Class. 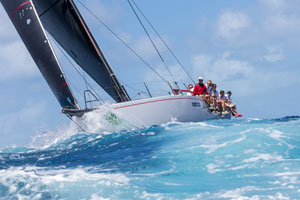 I think the success of the Class will be related to the image and the reputation. Media is important. Also, the more top tier sailors we attract to the Class, the better it will be. If Leonardo Ferragamo’s vision for the The Nations Trophy is to re-create the spirit of the Admiral’s Cup for example, I see a lot of top sailors coming to the Class. If good teams join, it’s good for everyone. The level of racing is high, so it will attract good teams.

SAILING WITH FAMILY & CRUISING
I try to involve my family as much as I can, three daughters are here (at the RSCC in Virgin Gorda), one of which is sailing. Usually, my eldest son is racing but he has to work this week so will join us in St Barths (for Les Voiles de St Barths). I don’t have plans to cruise at present, but I would love to do it some time. We will probably do some day sailing. With the Swan 45 we did this one summer in Sardinia where we had rented a house, it was perfect.

WHY THE CLUBSWAN 50
It is a great boat because if you want to do both inshore and offshore racing, there is no better way than in a One Design boat. The costs are significant but limited, especially compared to grand prix race boats, like TP52s.

I never understood what the rationale of being a second tier TP52 team. If I would be second tier, spending 4 times the money, I’d look closely at the ClubSwan 50. The feeling is not much different and you have a true chance to win at a fraction of the cost. Deprecation is lower and you don’t have to change boats every three years.

I can sell my 16 year old Swan 45 for more than 50% of its purchase price, while if you sell a three year old TP52 for a third of its price, you have made a great deal. The acquisition cost is also a factor. With a grand prix race boat you have to cover the development cost of the boat, which is not the case with a ClubSwan 50.

VIEW OF THE FUTURE
I’m an aerospace engineer. I was doing my dissertation from 1988 to 1991 (25 years ago) about carbon fibre reinforced plastics that were being introduced into aircraft and total pre-preg was foreseeable as the future in yachting at that time. It took 15 years for the top boats to use this technology and 25 years for production race boats, making the boats lighter and able to plane.

Now you can look at aerospace to predict what we will have in 15-25 years in yachting. Interestingly, there are no new materials. I do not see the technology coming any time soon, so potentially the ClubSwan 50s could have a longer lifespan than the Swan 45.

I see racing more and more divided into two categories. Foiling catamarans, which are fast, the challenge being keeping the boat on the foils. They are easy for the media, everyone understands the racing, but it loses the complexity of sailing.

Then modern monohulls are planing, it’s a different kind of sailing – it will be kept up. So there are good arguments why the ClubSwan 50 could last even longer than the Swan 45.

But Swan is not just a boat. An extremely important aspect at the end of the day is that it’s not just about buying a boat, it is about buying into the fun of sailing. The ‘Swan family’, how the events are organised, the circuit – it is all of this that distinguishes Swan.

If another company came up with a comparable boat that was cheaper and faster, I’d still go for the Swan. These aspects are extremely important to me.