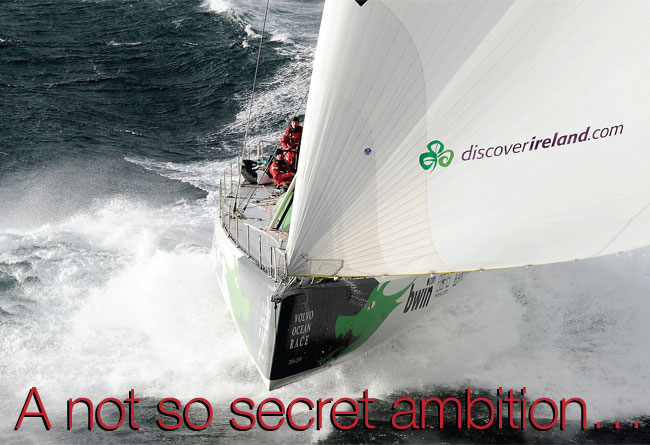 The Mirpuri Foundation is a non-profit organisation set up by businessman and philanthropist Paulo Mirpuri as a vehicle to support specific projects in many diverse but interrelated fields, including marine conservation, wildlife conservation and general social responsibility.

In marine conservation the foundation is promoting a number of projects and initiatives relating to ocean conservation and events to consolidate and reinforce these objectives moving forward into the future. Besides specific projects such as the Save the Ocean campaign, the Mirpuri Foundation also works to spread a message of increasing awareness among global authorities of the importance of protecting oceans and of the wider dangers faced by the whole planet due to pollution and the effects of the human contribution to climate change – over which we do have power to control.

Main picture: the Reichel-Pugh design Green Dragon was the VO70 on which 2014/15 race winner Ian Walker cut his ‘Volvo race teeth’. Green Dragon was built in a rush and came out overweight which greatly hampered the team’s competitiveness, Walker’s team finishing 5th out of eight entries – but the two-time Olympic medallist skipper was not put off… 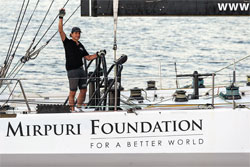 Above: Paulo Mirpuri at the helm of his chartered VO70 Green Dragon. The well-known Portuguese businessman and philanthropist has a remarkably diverse range of investments spread around the world – including co-founding NetJets Europe with the wizard of Omaha Warren Buffet; the ‘Uber’ private jet operation is of course transport of choice for a select few superyacht racing crew...

Ocean-related scientific research is a powerful tool to help us to better understand what is going on and how to protect the oceans, which ultimately means protecting the life of our future generations. There are many issues that informed governments should be dealing with as a priority, including illegal fishing (accounting for 20 per cent of the fish caught in the ocean), deep-sea mining projects, sea temperature rise, ocean acidification and the spread of invasive species.

The Mirpuri Foundation is heavily invested in spreading the message to the public and governments across the globe, informing them of the levels of pollution we now experience, with the emission of billions of tons of carbon dioxide and other greenhouse gases into earth’s atmosphere; the oceans are currently absorbing about a third of this pollution, about 22 million tons a day. But this buffer cannot last for ever and will reach a saturation point, one that some scientists regard as a potential point of no return for preventing increased atmospheric C02.

In this scenario the Mirpuri Foundation aims to lead by activities planned for 2017-2019 includes the promotion of initiatives to transmit a clear message accessible to as many people as possible. The first item in the Save the Ocean campaign was to assemble a boat and crew to make a transatlantic crossing from the Cape Verde Islands to Barbados, with meetings and media events at each end of the passage designed to highlight ocean conservation. These issues are very real for the fishermen and divers in Cape Verde, who gave testimony to the degradation of their fish stocks due to overfishing from foreign fleets and a depletion of coral reefs from acidification and pollution. With help from the foundation, a local Oceanographic Institute has been established as well as support for an artificial reef initiative to help recreate habitats for both diving and fish stocks.

Like his Portuguese forefathers, the master mariners of the 15th century, Paulo Mirpuri and his team headed west from Cape Verde for the New World. Their destination, Barbados, was discovered by the Portuguese a century before the English colony was established in 1627 and used as a stopover en route to Brazil. But unlike his forefathers, Mirpuri and his team covered the 2,300nm trip in only 160 hours on their chartered VO70 Green Dragon, reaching speeds unimaginable in the 15th century.

This fast passage had significant symbolic value for the project, with Mirpuri saying ‘The work and dedication of a yacht crew to achieve their objective, to follow a route and arrive safely, are reflected in the values of the Mirpuri Foundation. Ethics, courage, tenacity, persistence, hope, team spirit, technology and innovation are fundamental in the saga of an ocean crossing.’

There were also broader benefits to this trip, with Mirpuri adding ‘To cross an ocean helps us to become aware that it is truly possible to make the world better for future generations, starting with our own children. To know that every decision and every step count for the success of a sailing expedition, or for the good of humanity and of the planet, is to recognise the importance of teamwork and the values that guide it. When work, commitment and pleasure are combined, nothing is impossible.’

This brief passage to Barbados is just the beginning of a three-year programme for Save the Oceans which plans to assemble a team to participate in ‘a significant roundthe- world race in 2020’ – pointing towards that year’s edition of the Volvo Ocean Race. As a Portuguese national Paulo Mirpuri intends to honour his country and its long history with the oceans. ‘This is why we decided that the Mirpuri Foundation yacht will have an all Portuguese crew; we will use the next three years to train this team to the highest level.’

The Mirpuri sailing project has already received dozens of applications from top Portuguese sailors, some with world titles and Olympic participation on their CV.

Depending on the talent recruited, it will only then be decided whether the crew to take part in ‘the regatta’ will be male, female or mixed. ‘It is not enough for them to be good technically. It is essential that, as ambassadors of the Mirpuri Foundation, they share our values. Our main aim will be to publicise the foundation’s work on the conservation of marine ecosystems.’

As a matter of policy, the Mirpuri Foundation also supports projects investigating new means by which to protect marine species, as well as seeking to raise awareness of the need for more sensible – and acceptable – conservation laws and policies. Save the Ocean believes that a high-profile racing project will help facilitate this mission.

Confirmation of the ‘chosen’ international racing event will come in June and by the end of 2017 the final selection of the team will be concluded. Offshore training will then continue right through until the ‘mystery event’ begins in 2020.

‘I will be present throughout the training process and at all the race stopovers, and I will be onboard the Mirpuri yacht but only during the last stage of the race…’ says Paulo Mirpuri. ‘A round-the-world ocean race is a very serious undertaking and must be left to professionals; I shall leave that part to them!

‘Of course I dream of a victory for our team, but our main objective is to take part and to complete the race, taking the message of the Mirpuri Foundation to all continents and raising awareness of our cause among the maximum possible number of people.’

Click here for more information on The Mirpuri Foundation »