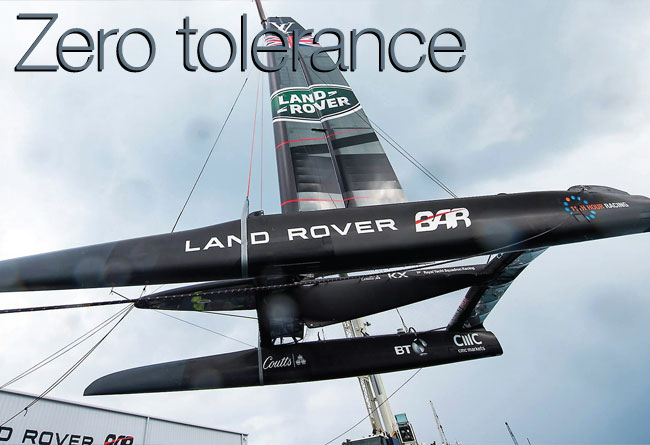 One company leading the revolution is Persico. Over the last decade Persico have become one of the world’s leaders in raceboat production. At present they are nearing completion of the new Mark Mills-designed WallyCento, while also this year starting a new 144ft fast cruising yacht, set to be built at their new facility in Massa Carrara, near La Spezia.

Twenty-seven years on from the company’s launch and there are CNC milling machines wherever you look in Persico’s gleaming new facility. However, now those CNC machines have been joined by some of the most sophisticated and up-to-date composite manufacturing equipment that you are likely to find anywhere outside Boeing or Airbus…

Along with a generously sized ISO 8 clean room (inset), Persico now boast their own in-house ultrasound scanning system for non-destructive testing (NDT), a large-scale 3D scanner for both reverse engineering and the dimensional scanning of components, four different fixed ovens, the largest being 45m x 12m, plus a transportable modular oven and a 25m x 8m vacuum table to join the two other existing (large) tables.

America’s Cup
For the America’s Cup Persico worked with Luna Rossa in San Francisco and with Land Rover BAR this time. The company has built around 80 per cent of the British AC50, including the tooling for the hulls (but not the hulls themselves). This included by far the trickiest parts – the foils and the wings, both at the limit of what is currently possible to build, albeit for entirely different reasons.

AC50 boards, for example, are either two-piece with a metal or composite part forming the core of the corner, enabling each shaft to have different tips attached to it. AC foil designers push for the smallest section foils possible to minimise drag within each wind speed range, while at the same time requiring exact deformation characteristics, all from a part that will often be carrying most of the weight of the boat and the dynamic loads encountered at 40kt+ speeds.

Yet the foils are structured with next to no safety margin – only possible today because of the accuracy of FEA and subsequent manufacture. As Somerville says: ‘It’s amazing: it wasn’t that many years ago when you just didn’t understand exactly what the safety margin was. In 2017 we’re engineering it down to the last few per cent. It puts a huge emphasis on the manufacture. 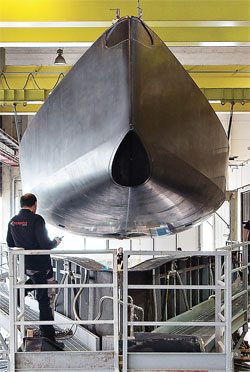 VO65 boat no8 (above) comes out of the female mould at Persico for the new Akzo Nobel Volvo team. This is effectively the 9th VO65 hull from Persico – during their remarkable rebuild of the wrecked Vestas in the last race virtually a whole new hull shell was moulded. At their facility in Bergamo Persico now boast clean rooms (below) that would not disgrace a race car or even a small aerospace manufacturer. But even this level of resources has been tested by some of the AC50 parts, in particular the foils with their complex variable deflection profiles…

‘These boats and parts must all now be absolutely flawless.’ Persico have acquired huge experience in building foils, be it for monohulls such as Imoca 60s or for flying multihulls such as the AC45 turbos, AC72s and the latest AC50s. As a result they generally end up co-engineering the boards for these types of boats.

Nonetheless, building AC50 boards still takes months, involving a complex process that is half-laminating and half-machining. ‘You’re laminating inside moulds, then you’re curing, processing and assembling parts within the tool and going in and out of milling machines between three and five times to produce a daggerboard,’ explains Somerville. Typically they lay up the (inner) compression side of the board into a mould and machine the (outer) tension side.

Being able to do this while achieving such exact precision in the build is where the skill lies, says CEO Marcello Persico: ‘It’s a challenge for us and that’s why we have developed our many tricks to be able to manage this! Even so it’s not easy. It’s not like putting a block of aluminium in a machine and then switching it on…’

If the design of foils is all about packing maximum structure into the smallest available area the challenge of constructing AC50 wings is very different, more of an aerospace problem, concentrating mainly on building a large structure in the lightest possible manner. In some instances the carbon ply weights on the AC50 wings are coming out at under 20g/m2, in other words so thin and fragile that they can no longer be laminated by hand.

‘You’re using lighter materials than you’ve ever used before,’ says Persico. ‘Even the glue films and the resins are a lot thinner and lighter.

‘Of course there’s been a lot of material testing to make sure that you’re not driving it too light, because you don’t want the thing to fall apart. Bottom line, these are the most complicated parts you could probably build…’

Volvo Ocean Race
Persico built the VO65 hulls, primary keel structure, bowsprits, daggerboards and their cases, plus all the daggerboard tooling and associated parts. During the last race the company rebuilt Team Vestas Wind from its wreckage, in a remarkably short time. Now Persico have taken on the entire construction awarded by Volvo Ocean Racing, save for the deck, of the one new VO65 being built for this year’s round-the-world race.

Vital to building the VO65 is its one-design integrity. To achieve this Persico received all the moulds and jigs from Volvo, so the parts are identical whether they were built in 2014 or this year. The result is amazing: on an all-up displacement of just over 11 tonnes, variation between boats is <20kg. As Somerville points out: ‘That’s a smaller tolerance than the piston of your car. There hasn’t been a one-design boat built to those percentage tolerances ever before… at any scale.’

Such is their confidence in their processes that the all-up weight of the VO65 does not need checking as along the way everything is measured, weighed and approved by class manager James Dadd. ‘Every single part is built out of a mould that has already been approved by Volvo,’ says Somerville. ‘Then when the part comes out it’s trimmed and detailed and it’s weighed and checked for the correct geometry, and every part then has an “approved part” label number put on it. When the boat’s finally assembled, there is no doubt that every single part is correct.

‘We’re not building boats like a typical boatyard and we’re not building boats like we were doing even 10 years ago,’ says Somerville. ‘The process engineering and design have moved on so much. It starts in the technical office with designing of the processes, making sure that you design them to fully take advantage of your infrastructure, your CNC machines, ovens, hot presses, plotter cutting tool [all materials are plotter-cut to the right size and geometry], and so on.’

For sailors it would be understandable to feel that the new VO65 will be faster or better somehow than the existing boats from the last race. However, this is just the legacy of the days when boats were built much less accurately and using ‘floppy’ Kevlar rather than rigid carbon/Nomex.

Resin systems have also improved greatly, with a wider variation in curing temperatures, with lower-temperature curing resins being used to minimise distortion while retaining the best mechanical properties. ‘We don’t perceive the new boat to be any different from the first seven – they’ll all be identical. The last boats all went around the world and there was very little to be done on them and very little degradation.’