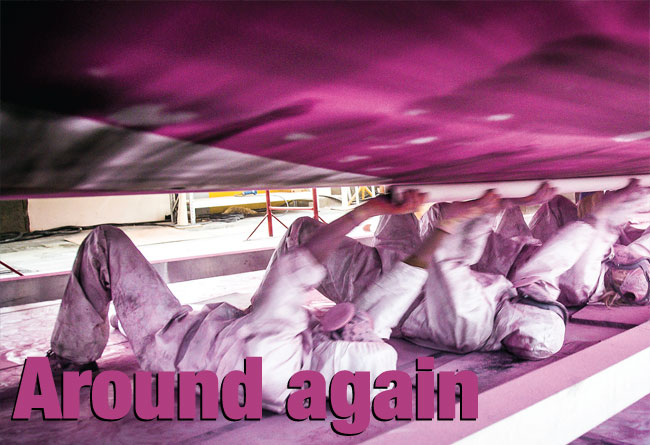 There’s a new raceboat yard in Lisbon, and they’re flat out finishing off a ‘new’ fleet of round the world raceboats…

Seahorse Magazine: What was your brief right at the beginning of the refit process?

Nick Bice – VOR director of boats and maintenance: The priority was reliability. The VO65 created a lot of reliability for the stakeholders in this race, for the teams, sponsors, sailors and of course us at Volvo Ocean Race HQ. In originally selecting the VO65 the criteria were reliability, performance and safety, which is paramount… and these boats now need to do another 70,000 miles. So my brief to the team was identical to when we were servicing these boats during the stopovers in the last race: always be proactive, not reactive.

SH: How many are there in your team?

NB: I have managed to keep our core team from last time and the head of each department. Then we’ve built onto that family, so we currently have close to 30 people in Lisbon. A significant number of those are in the paint team, as with new sponsors and branding there is a lot to do there!

We estimate the whole job will take 3,500-4,000 hours, with 2,000 hours just allocated to painting the boats. We have these 30 people on site but a lot of the components go back to the manufacturers for servicing, so there are many more people involved than you see here in Lisbon.

SH: And there is a huge amount of work just in pulling these boats apart…

NB: Over 700 components are coming off each boat, so there is a boat captain for each VO65 who is responsible for their boat as it goes through the refit process. Part of that is ensuring that every single part of the boat – however small – gets catalogued, then is sent off to the supplier or serviced on site.

We basically have five bays and each bay is set aside for three weeks’ work. The first one is all about stripping the boat – anything that is bolted on to the VO65 comes off. Everything. Hatches, winches, traveller systems, keel systems, sailing hydraulics… everything. Then the boat moves into the painting bay, which means it gets fully sanded back to carbon, then we fill and reundercoat the whole boat, with all the borders and flat areas on the decks painted to exactly the same specification.

Main picture: situations (always) vacant when the longboarding gets started – here down in Lisbon on the bottom of the former Team SCA. Hull shells this size are today routinely flipped which makes fairing massively easier but it’s not so simple with a completed yacht… or seven completed yachts. Ultrasound, X-ray and NDT testing are carried out all through the VO65s before a schedule of refurbishment for each boat is agreed. This damaged carbon outer skin (below) is being replaced on Charles Caudrelier’s Dongfeng

Once out of that three-week process we still haven’t needed any input from the teams on how the boat will finally look, and we have the gloss areas painted and the bow area painted with the Volvo Ocean Race logo. All we now need from the teams is how the hull will look and what colour the non-skid will be plus any other branding. This means we get close to 80 per cent of the paintwork done without any team input.

SH: You know these boats thoroughly after maintaining them around the world the first time. Surprises…

NB: We found a few anomalies through non-destructive testing in a couple of areas but nothing we didn’t really expect.

The extent of what we discovered with our NDT after 60,000-70,000nm was no worse than you would have expected to find during the first Cape Town stopover racing the old VO70s; so the VO65s are pretty strong and robust. But I’m not surprised the systems held up well, they were developed through many years of often painful Volvo 70 experience. The reality is the VO65 has less righting moment and so the systems are simply worked less hard.

SH: The Vendée saw extraordinary racing, but it still saw some foils, keels and rigs breaking on the Imoca 60s. As Richard Mason [race veteran and now chief operating officer] has said, the VO65 remains pretty much fit for purpose…

NB: Absolutely, these boats still tick the design brief bang on. Unless you’d sailed one of the VO70s, which were extraordinary – if fragile – boats, the VO65s are very high performance. The VO70 spoiled a lot of us but, boy, did the shore crews and sponsors pay a high price for that fun.

So, yes, clearly we are looking at all this again for the future, bringing back that hard-core excitement; but now we are confident we can also keep up the reliability through another strict one-design brief.

SH: How much ultrasound have you run?

NB: Throughout the race we were running extensive NDT, plus through the refit. When the boats first come into the yard the guys from QI Composites spend four or five long days working over each boat.

SH: You have a very impressive refit facility here in Portugal.

NB: If you tried to design a dream facility it would be hard to improve on what we have here. It is pretty phenomenal to have a facility that was originally built pre- 1950s that suits exactly what we’re doing in 2017. It was the old fish market, so the big bays we need were already there. The place is solid, plenty of natural light, right on the harbour; the boats get wheeled in on a cradle at one end and move along the production line to finally be launched into some of the best training conditions you can find, right here off Lisbon.

SH: Keel components and hydraulics… what have you replaced there?

NB: The keel hydraulics all went back to Cariboni in Italy, every single element. After replacing all the seals everything was then put on the test bench for crack testing and all the standard engineering protocol tests. If anything looked fatigued it had to be replaced, but it was mainly just the seals plus swapping in a lot of new sensors.

The keels themselves are all fine. We used the navy yard in Portugal to get them sandblasted and inspected, then the paint process is done there too. One change we are making is to put a speedo sensor into the bulb, which from a calibration point of view is important as this location gives it much less interference. This gives much better data; it was a universal request from all of the navigators in the last race.

NB: During the last race we saw some anomalies around the spreader roots on the mast, so what we have done for this edition is fit spreader buckets, which help tie the tube together at the spreader roots. We have also replaced the tracks on the back of the rigs, as we had a couple of issues with Dongfeng during and SCA after the race.

The reality is most of these boats have already done 70,000 miles; that is a lot of miles for a raceboat – or a carbon mast. Some boats elected to go for a new mast and so all the adjustments and changes to the existing rigs are going on the new rigs.

SH: And at the end of this process all these boats are weighed once again.

NB: We weigh them at different stages. But when the boat had gone through the one-design painting and all the components were onboard we weighed Dongfeng and it came out 20kg lighter than when it emerged from Green Marine at this stage prior to the last race. So all the boats will be weighed then, plus again after the branding has been applied, and then we will be able to apply the correctors so all boats start at exactly the same weight.

SH: And these correctors will weigh…

NB: Prior to the last race we had a spread of 36kg across seven boats and we see it being less this time, so from the lightest to the heaviest boat will be around 30kg.

SH: How do teams select boats?

NB: Some teams such as Dongfeng have an existing boat, others also already have a boat if they are a repeat team and then there are the sales transactions between a 2014 team and a new team.

SH: When does all this intricate refit planning stop for you?

NB: 2 June, when final handover of boat no7 occurs in Lisbon. That also includes boat no8, which will be transported from Persico to us in Lisbon to undergo all the processes the rest of the fleet have had in the refit facility – the same guys fitting the systems and painting the boats.

SH: So all of July you will be sleeping?

NB: Mate, if I was pulling a team together in this race right now I can tell you Liz would be my first hire. She now knows these boats inside out and is just a fantastic sailor… as we already know.
Blue Robinson