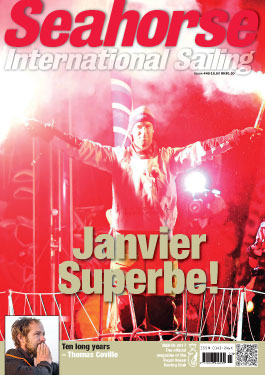 Personnel critical
A crew may not be a deciding factor in winning the America’s Cup but they can certainly lose it. KEN READ introduces his new Cup column…

Be afraid!
The Dynamic Stability System has moved in from the lunatic fringe… GORDON KAY reviews the progress and acceptability that have been achieved

The (furling) revolution continues
Just in time for the next Volvo Ocean Race, Future Fibres have completed final testing of their new TorqueLite 2.0 furling cables, which should make the writhing foredeck python a little easier to bring under control when you are bouncing around and holding on tight down in the Southern Ocean (as will now be the case once again in 2017/18)

Same features smaller package
Between them Morrelli & Melvin and Hudson Yachts have created another fine-looking big cat, this one with the emphasis on a fast but safe boat that is manageable without the need for professional crew. Yet somehow ‘pound for pound’ it has come out relatively faster than the big sister that preceded it

Design – Flying oldies
‘Cabinet GSEA’ in Brittany are to date the only engineers to have converted a 2012-generation Imoca 60 to foiling. DAMIEN DOYOTTE

Sailor of the Month
Kindred spirits underneath