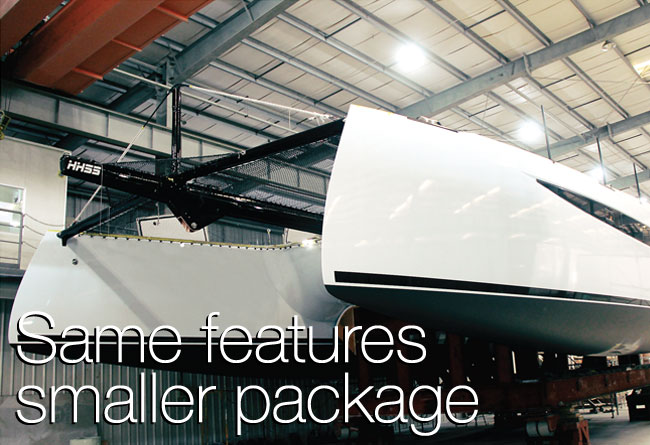 It’s safe to say that high-speed offshore multihulls are no longer just a novelty enjoyed by a select few devotees. More and more of these craft are appearing around the world and builders are seeing a steady stream of interest and demand at various sizes for proper offshore yachts that are not only fast, but also comfortable, stable and versatile in use.

Main picture: Top: the new HH 55, latest offering from Hudson Marine with design by Morrelli & Melvin. Although aimed at the long-distance cruiser market, foot for foot this latest big cat is expected to deliver a sailing experience that is even more ‘sportif’ than its 66ft big sister.

Last year’s launching of Hudson Marine’s HH 66 represented the introduction of the newest generation of offshore catamarans; the sleek 66-footer quickly demonstrated that luxurious and stylish cruising accommodation could now be delivered with an even higher level of sailing performance, the HH 66 beating more seasoned peers in the Mediterranean Multihull Cup last autumn. This success not only prompted more business for Hudson Marine – five HH 66s have been launched, are in build or are on the order books– but also some valuable feedback to influence the next big cat in the product line, the new HH 55, due out for sea trials this month.

‘The usage of these boats has a big influence on our parameters in design,’ says Gino Morrelli of Morrelli & Melvin. ‘For example, we find that on the larger designs there will typically be a professional captain with possibly another mate or two to assist in system management and maintenance.

‘With this professional help, the complexities of sophisticated electronics, hydraulics, propulsion and sail-handling systems are more likely to perform reliably when needed, and thus the boat can be equipped with these systems with greater confidence and optimised for performance around the owner’s demands.’

As with every multihull, the key to good performance is the inherent sensitivity to payload weight and how it affects sailing trim. However, this is actually of slightly less concern on the largest cats, not only due to their greater size (and thus the dilution of the effect of adding extra equipment), but also because of the pattern of use: most owners of boats in this size range are less likely to take long, extended cruises than they are to be sailing for two to three weeks in shorter sprints between destinations. Therefore the weight of stores carried is less, allowing for more allocation of the weight budget for toys to be carried for use at stopovers. Because of the shorter itineraries there is also less call on the weight budget for items necessary for longterm selfsufficiency, such as spare parts for the engine or any of the numerous systems onboard.

The HH 55 in contrast has about the same design payload as the larger 66 due to the typical owner’s interest in being self-sufficient, so the hull design reflects this. At nearly the same hull volume, the 55 still has wave-piercing bow sections for performance, but a flatter aft run with less rocker, and is therefore able to accommodate variations in weight with less effect on fore and aft trim.

For sailing efficiency the 55 can be supplied with two deck layouts: an aft cockpit configuration with all the sail-handling systems also routed aft, or a forward cockpit just aft of the mast, a layout commonly seen on the larger cats but that is more exposed to the elements while in use. So far the preference expressed by new owners is evenly divided between the two options.

Hull and deck construction for the 55 employs the same resininfused carbon/thermoformed damage-tolerant foam used in the 66, which optimises strength but also ensures durability for the long, hard use expected with an extended-range performance cruiser. High-temperature curing pre-preg is used to build the daggerboards and T-rudders for greater stiffness and strength. There is also an option to use a higher-performance TexTreme carbon, but build manager Paul Hakes has seen less interest in this alternative material than for the larger HH 66. 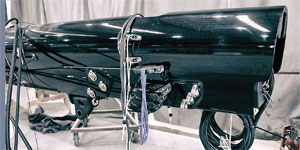 Immaculately finished Southern Spars carbon mast (above) and elegant and slightly futuristic sail management pod (below) are typical of the very carefully thought-out detailing and high-quality finishes to be found throughout the new HH55. After an early career spent building custom race boats in New Zealand, at Hudson Marine lead boatbuilder Paul Hakes has found a new spiritual home where he can continue to develop a well-earned reputation for delivering beautifully presented and reliable composite yachts 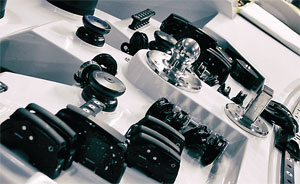 This philosophy of sensible application of technology carries through to the engineering of the hull and main structures; for example, use of carbon in the forward crossbeam gives greater peace of mind in exchange for only a few ‘micro-knots’ in windage drag. To date HH 55 owners have deemed the trade-off to be worth it!

The same applies to the carbon mast built by Southern Spars, where Morrelli says their in-house design and engineering tools show a good fit to his own calculations, thereby allowing for optimal efficiency in materials and design.

This is particularly important in high-speed cats due to their high righting moments and ever-changing dynamic loadings – especially in a seaway. For example, compared to the 66, the 55 is 3-4 tons lighter but proportionally has higher stability, placing ever greater demands upon spar engineering.

One-design load case applied to the rig involves flying a hull on a reach under just the reacher alone… ie with no mainsail to offer fore-and-aft support. In this configuration the torque on the rig is at its maximum, so on the HH 55 the attachments of the standing rigging are separated in order to reduce the maximum stress concentrations and thus to avoid overloading the laminate.

Sail-handling systems on the 55 are a notch below the grand prix level. Both Morrelli and builder Paul Hakes have found the potential HH 55 owner to be more hands-on and less likely to have professional help onboard, and therefore the choice of systems was driven by a tailored balance in weight and complexity, along with ease of use in both operation and maintenance.

‘At 55ft in length, the scale of the sail-handling systems is at what we think is the upper limit for what a competent cruising couple can handle without professional crew,’ says Hakes.

‘When specifying the systems for the HH 55 we tried to imagine the worst-case scenario a couple could find themselves in and still be able to work through without too much stress, rather than the system that would be the absolute lightest in order to pursue the best outright performance possible.

‘There is a balance here, and it’s important to know where the comfort zone is for the non-professional owner who wants to go fast on his own, but not at the expense of safety or comfort.’

An irony in all these small tradeoffs in weight is that, according to Morrelli & Melvin’s performance modelling, the HH 55 is actually nearly as fast as the larger 66 with all its high-tech systems. Analyses indicate about only a 1kt reduction in boatspeed in most wind scenarios, with maybe slightly more in the upper wind ranges where sail handling becomes more demanding and ideally requires a component of professional crew.

Much of the reason for this relative gain in the performance of the smaller boat lies in the power developed in the long, curved boards on the HH 55 that are to the same design as on the 66, but just 400mm shorter. These produce enough lift to reduce the wetted surface of the hulls substantially, and according to Morrelli very nearly allow the boat to break free and foil. T-foils on the rudders also stabilise the pitching motions and ensure a comfortable ride.

This is a key feature in these new-generation cats: not just foilinglevel performance achieved in a large luxury yacht, but performance that can be done safely and reliably for an experienced couple on a long passage (or race) to the destination of their choice.

‘This boat is well-built and reliable, and it’s also fast, make no mistake,’ says Hakes. ‘There’s no hiding the fact that here at the yard we are all now looking forward to the first sea trials…’