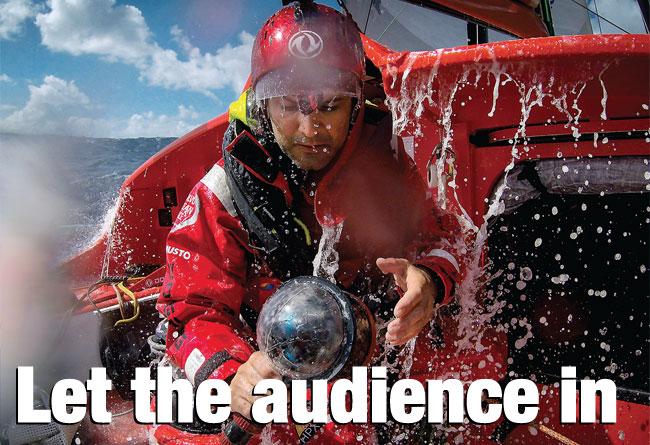 Blue Robinson talks to Leon Sefton, head of Volvo Ocean Race TV, about the increasingly complex role of the onboard reporter

Seahorse Magazine: What are your expectations of the onboard reporters this time?

Leon Sefton: For the 2017 edition we are looking for multi-media reporters who are also good storytellers. This is a particularly difficult role to fill, given the complexity of skills the onboard reporters need to bring to the position. They have big shoes to fill, so to make the OBR candidate list the new entrants are going to have to be of a quality to knock existing people out of contention – or at the very least be on a par with their predecessors. They must be outstanding photographers, videographers, interviewers, writers, all-round modern media communicators; plus they need to be able to withstand everything that life onboard a VO65 can throw at them.

SH: Quite a big ask…

LS: It is a big ask, so we designed an application video that targeted people who want to see what lies over the horizon. People who work in media, proven storytellers, people who love this race and want to take part in something big and want to help us dig into the minds of sailors who drive themselves relentlessly – obsessively – to win. Deciding who will get the opportunity to join the OBR team is difficult, partly because we have had so many strong applications; the real test is to send the best candidates offshore, to see how they perform and we have already begun this process.

This will involve a sign-off from skippers that the OBRs are safe to go to sea in brutal conditions. While holding the right media credentials, if they also have sea miles under their belt that clearly is a positive, or the ability to impress on us quickly that with the right preparation they can get to grips with the seriousness of ocean racing. We are also mindful how people from outside our world bring a fresh perspective.

LS: Over the past few months we have given candidates from a wide range of media backgrounds the chance to sail – it has been fascinating. Some have worked, others haven’t, but it has reminded us all how challenging this role is. This is not just about shooting great images or drawing out great interviews, it is also about being a team player, a person who gets on with the crew and who the crew will respond to and want to have around. OBRs are involved in things like making the meals and bailing the boat to take the load off the crews, but ultimately they are there to be observational journalists, witnessing the team’s story but not necessarily being part of that story.

SH: How difficult is selection?

LS: More than 9,000 people looked at the application micro site. We have raised the bar both in the quality of the next-generation OBR and in what it took to apply; this time we required every candidate to produce a video to introduce themselves, plus demonstrate their all-round capabilities. From that we took forward 160 applications, with the quality in the top half of that group being exceptional – including war reporters, nature documentary makers, photo journalists, broadcasters and writers, so we are in the happy position of having to make some difficult choices.

Main picture: Dongfeng OBR Yann Riou – also an enormously experienced sail trimmer – multi tasking during the last race as he photographs himself shooting video on Leg 5 to Itajaí.
Below: the media station on 2014/15 entry Team SCA sits neatly next to the navigator’s slot; neat and dry in port, keeping things this way at sea demands rigorous discipline… 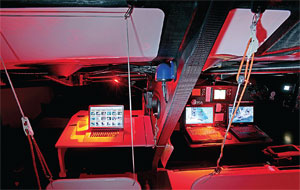 SH: How quickly can you determine if a candidate will perform under pressure?

LS: This is not a rushed process. We have time to collaborate with the teams, particularly the skippers, and of course for safety reasons we are not going to push people out into potentially risky scenarios. So we look at CVs in terms of media credentials, balancing that with offshore experience.

We are interested in people with more media experience than time at sea. We talk about that when we put people forward for sea trials, so then we send them out with an OBR chaperone in a race team and go sailing, asking them to generate some video content, take some images, write down their thoughts and do some editing onboard; from that we can see if they can cope. Can they sit below on a VO65 with no natural light, in a hot, sweaty, wet environment? Can they write? Can they edit? Can they look after the gear? Do they engage with the crew? Do the crew like them? If not, it’s a long way round the world in a 65ft carbon-fibre raceboat.

SH: Performance markers for the OBRs?

LS: Firstly we now have a good track record knowing what we need to produce each day, so that gives us a clear benchmark on what to aim for. Our goal is to create a squad of OBRs that we can move around the boats if we need to. The plan is to have them led by former OBRs, who become coaches and guides to give them the start they need. Then we will use events like the Fastnet to put everyone to the test.

A benefit of having the Lisbon refit programme is we hope that many of the teams will use Lisbon as a training base. This means we can put an OBR leader there, running our squad. One of the subtle differences this time is that we have brought the OBR administration under the VOR, rather than being employed directly by the teams, and that means we can work hard on creating more of a team ethos on how they collect the story of the race than in the past. Sure, this is about them concentrating on their own race team, but there are a lot of crossovers in fleet racing.

LS: The media systems on the boats have had a refit and will be used again this time. We can go to live anywhere on the planet, plus we have upgraded the system as the OBRs needed better user-interface software. They can now see exactly where the satellites are, knowing the angle of sight to a satellite, plus they can be on deck filming with a wireless camera and be able to cut between any of the onboard fixed cameras.

SH: The leg out from Cape Town is a massive part of the next race.

LS: We are heading back into the Southern Ocean in a big way, so have added two more cameras on every boat, so each VO65 now has seven fixed cameras. The stern hatch and lower spreader cameras can now be remotely controlled, while the forward-facing mast camera is fixed, but we have added an under-slung camera looking down from the third spreader to offer a bird’s eye view of the yacht on the days when it’s too windy to launch drones.

We have also placed a new bow camera on the pulpit looking aft. This will spend much of its life submerged, but should send great images when the yacht is surfing in the Southern Ocean – it’s an angle often too dangerous to film when you want to.

We also want to hear from the crews directly, so are giving them the opportunity to communicate directly with their social media audience; but this needed a rule change, in terms of outside assistance, so the communication remains one way – the sailors can send but not receive when at sea. We are also actively encouraging them to build up their individual profiles.

SH: Key feedback from skippers and crews last time on the OBRs?

LS: Depends which skipper and which OBR! The skippers as a group were used to running their own OBR, and we saw some really switched-on skippers such as Ian Walker, who understood and fully recognised the opportunity. He utilised his OBR in a different way – Ian didn’t have Matt Knighton making every meal for the crew. As they had different dietary needs in the team, Matt was relieved of that and all he needed to do was get the day’s food bag out and ensure there was hot water available and the guys sorted out their own food. That freed up a lot of time for Matt, so he could focus on what he was fundamentally there to do, which was report, and you could see the benefit of that.

SH: Ian speaks very highly of Matt and his ability to fit in.

LS: Absolutely – and this became apparent when we started trialling in 2013. This is a team race so the right fit is crucial, and the initial feedback from skippers this time inevitably includes concerns around rotating the OBRs. Clearly our objective is not to upset the balance or create problems, so in the trials we are doing at the moment we are looking for a primary OBR for each boat plus a well-matched reserve.

Ultimately, making this aspect of the race work is all about developing a high level of trust between ourselves and the teams; this means at times lowering our guard, and being brave in sharing the story… maybe braver than we have been before.

SH: So everyone wins…

LS: We have a core audience to serve: the sailing and race fans, who will consume everything we can throw at them, plus there are other audiences branching out from that. But we also need to take this race to new audiences, people who aren’t aware of the race and the extraordinary things the sailors are doing, and this is what I mean about an authentic story. Yes, sailors have their livelihood to protect, but it is time to let the audience in a little, to see how extraordinary this is. And it isn’t every day the sailors come up smiling – some days they have to wrap that smile on. Remember when Ellen MacArthur let the mask slip on camera in the 2000 Vendée, that was probably the most watched bit of weeping in the history of sailing… possibly of sport itself. That’s what we mean by authentic.

I was lucky to sail with Sir Robin Knox- Johnston on Suhaili and asked him what has and hasn’t changed in racing around the planet. He said it’s like Everest, if you want to do it, it’s still one foot in front of the other. Yes, it’s been done before, but you have to face whatever the weather throws at you and get home safe, that is the mystery of these ocean races… a new group with the same set of challenges.

As race organisers we have a huge responsibility in how the public are consuming this race and how they are not. This is about serving the audience, not going too far down a track we may fancy the look of without ensuring that our view of things is shared by the audience!