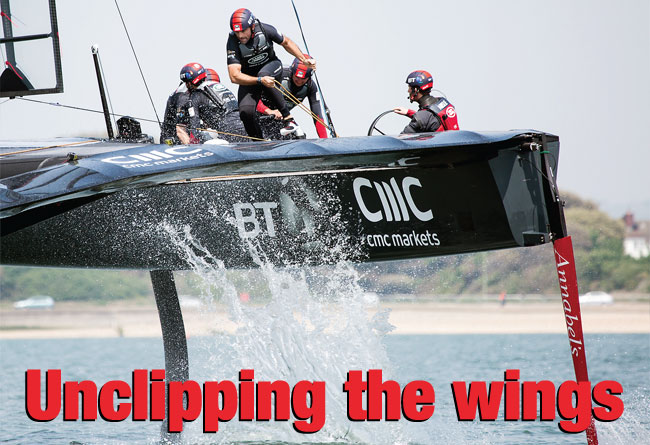 While design and control of the foils are likely to be the main performance drivers of the new-generation AC50s due to race in Bermuda this summer, they are closely followed by the America’s Cup catamaran’s power source: its giant articulating wing.

It is perhaps slightly disappointing, given that the America’s Cup is supposed to represent the cutting edge of yachting tech, that the AC50 wing is effectively one-design in terms of its shape, layout and geometry. Thus the wings on all the boats will be 23.9m high with an area of 106.5m2 (supplemented by a 36m2 jib), will have a minimum weight of 445kg and a centre of gravity no less than 9.15m above the step.

Kept pointing heavenwards via two shrouds per side and a forestay, the wing comprises a structural wingspar that hides within a D section-shaped fairing – making up the front element – off which everything else hangs. This spar rotates upon a tiny ball residing in the centre of the main crossbeam.

Mounted on hinges off the back of the main wing are the three flap elements that form the trailing edge. The hinges for these flaps are deliberately slightly forward of the aft edge of the main element, creating a gap (the ‘slot’) between the wing and flaps – which under the rules can be no more than 60mm, but is more typically 15mm upwind and perhaps 25mm when maximum camber is cranked into the wing downwind in light conditions. This slot is all-important, acting like a turbo-charger, allowing the air to escape from the high pressure side, enabling the flow to remain attached over a larger part of the wing – particularly important when maximum camber is induced into the wing downwind.