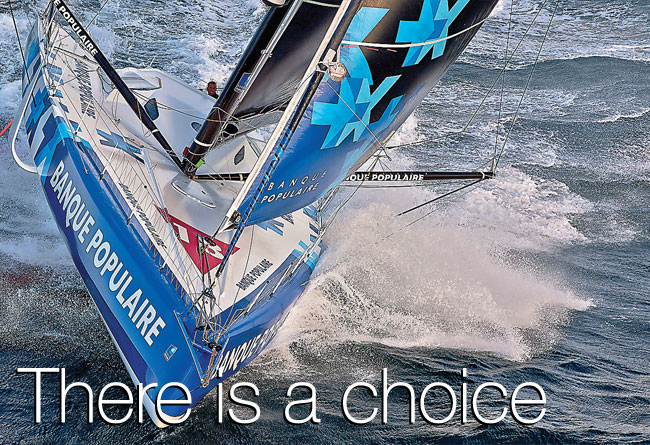 Much has been written about hightech rope as well as the benefits of carbon standing rigging in its various incarnations. But what about that grey area between rods and rope? Maffioli is well known across the yacht racing market for its ropes, but the Italian manufacturer is also now a leading supplier of composite cables, primarily using unidirectional Dyneema of which the highestperforming type is currently SK99.

Main picture: Probably not at the top of the list when Armel Le Cléac’h was selecting Maffioli SK99 Dyneema furling and runner cables for Banque Populaire, but the cost savings compared with cables in PBO or carbon were no doubt a handy bonus. Against a small price in windage, with typically slightly larger diameters compared with carbon, Dyneema cables exhibit superior physical properties to other rival fibres; the SK99 cables have also proved very robust and durable in conditions of heavy use. Perfect for the Vendée Globe, in other words…

Like its forebears, SK99 is an Ultra High Molecular Weight Polyethylene (UHMWPE), a family that also includes Spectra, although SK99 is a more recent product. This latest iteration follows the initial development of SK90 by Dyneema’s Dutch manufacturer DSM, working with Maffioli for the fibre’s use in running rigging onboard Alinghi’s successful defending America’s Cup Class yacht in Valencia in 2007.

With PBO and then carbon cables subsequently entering the market, Maffioli had contemplated exiting the cable market. But it was soon evident that Dyneema cables still had their place among their more heavily promoted counterparts. As Gottifredi Maffioli says: ‘We tried to position ourselves in a complementary spot, one where everyone else wasn’t heading.

‘And we were quickly successful, particularly among smaller boat customers. Carbon is very good for big boats but its impressive physical properties are not relevant for all applications due to its stiffness; it can be deflected but not bent dynamically around sheaves or at mast exits. We grew in the areas between ropes and cables, where no one else is working – now you even see applications for cables where traditionally rope has been used.’

If carbon fibre is ultimately considered to have the optimum qualities, such as strength versus diameter, for standing rigging and headstays, Dyneema cables, comprising bundled unidirectional fibres held within a braided outer cover, are better suited to pretty much every other application onboard. This includes aft rigging such as runners and checkstays, where loads are intermittent and there is a strong likelihood of repeated impacts. When minimising weight aloft is vital, with less emphasis on windage, SK99 still offers the best strength-to-weight properties of all the composite fibres now on the market, while also representing better value and durability than UV-vulnerable PBO.

Maffioli SK99 is also well suited for use as headsail torsion cables, as Dyneema cables can be coiled with the sail once it has been lowered onto the deck. Strength for strength Dyneema cables do feature a slightly larger diameter than equivalent carbon stays, but this makes them ideal as furling cables, particularly on downwind sails where the added windage of the SK99 cable has no detrimental effect. In fact, this larger diameter provides additional torsional force moment for easier furling.

SK99 cables can even be safely turned around corners, so can be used where a cable passes around a sheave, such as for deflectors or steering cables, jib up/down systems and barber haulers.

Maffioli SK99 cables come in various forms, tailored for different applications. While all contain bundled SK99 fibres, the main variation lies in construction, weave and the outer braid. With furling cables, for example, the outer braid comprises several layers which are then laminated with resin to improve torsional rigidity.

The ultimate endorsement perhaps is that the cables produced by Maffioli for gennakers, Code 0s, fractional spinnakers and runners, along of course with Maffioli’s well-known range of high performing ropes, have been chosen by the majority of the Imoca 60 teams racing in the current Vendée Globe. In particular, SK99 cables have been selected for every one of the latest-generation foiler designs with their much more violent motions, meaning that skippers are even more reliant upon these cables in terms of durability and reliability, as well as in dealing with the usual foes of UV and saltwater degradation.

And now this technology is being embraced by another increasingly significant and demanding sector of the market… the superyachts.

As Maffioli observes: ‘Until four or five years ago superyacht rigging solutions were fairly conservative. Now they’re being sailed by a new generation of former America’s Cup sailor whose technical skills are higher and the boats are being sailed much more aggressively as a result. They have new and much less forgiving sail constructions and deliver a completely different level of performance.

The packages we are providing the superyachts with are similar to what you’d specify for the top-end raceboats. Just a bit bigger...’