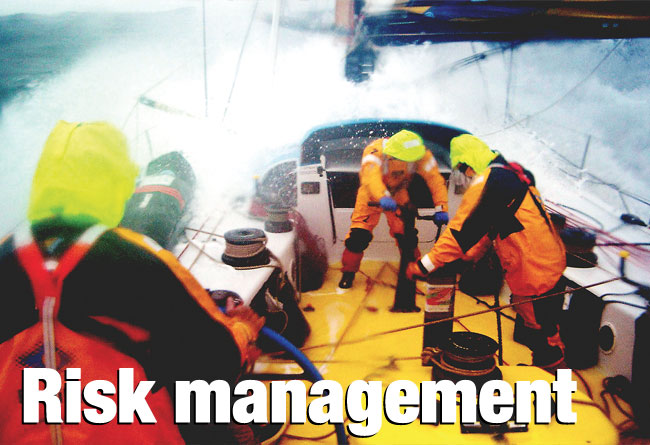 A one-design Volvo Ocean Race equals tight racing around the planet – that was certainly the case with the VO65 one-designs introduced for the last edition of the event. But things could change considerably next time around… Blue Robinson talked to Abu Dhabi Ocean Racing’s 2014/2015 race winning navigator Simon Fisher about rewriting the risk-reward equation as a result of ‘opening up’ the next edition of the race in 2017/18

Seahorse Magazine: Volvo Ocean Race CEO Mark Turner raised the element of a sheep mentality in the last race. How much of this was true, do you think?

Simon Fisher: From our team perspective onboard Azzam we were well prepared and so we set off with the mentality that we would be conservative, we wouldn’t take too many risks and would play the fleet, and with this preparation and good boat speed we were hoping other boats would fall off the back of us. By not taking risks and by consistently scoring good results we would do well, which was how it played out. I know from speaking to guys in other teams as the race progressed that they saw our approach as a good one, so when everyone got closer and learned from each other, sure, a herd mentality started to develop.

SH: This is after all a one-design fleet…

SF: Exactly. When we used to race on the VO70s every boat was different, with each having optimum angles and each with a slightly different sail package, so there were times you had to commit to sailing to the angle that was fast for you. Now with a one-design boat, theoretically everyone’s optimum angles are the same, and this, tied with the fact we can see each other on AIS all the time, meant it was close and so nobody wanted to take a big risk. Taking a risk means you might win a leg, but you also might come in sixth or seventh. So as the race went on the teams that we expected to take risks adjusted to a more conservative mindset to stay in the mix. For the stronger teams it made little sense to try to win a leg with a risky option.

SH: Ian Walker (Abu Dhabi skipper) didn’t have to reign you in at any stage?

Main picture: very cold and very wet but over the 45-year history of the event it is the Southern Ocean sailing that has been the biggest draw for sailors trying to take part in the Volvo Ocean Race. This is Torben Grael driving Brasil 1 through the Southern Ocean during the 2005/2006 event – Grael’s VO70 was dismasted shortly after this photo was taken. I loved the Southern Ocean so much I moved there… multiple race veteran Skip Novak, seen (below) during the 1977 race now runs sailing/climbing expeditions to Antarctica 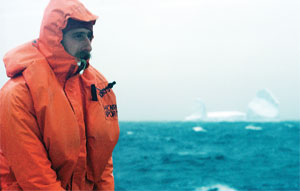 SF: No, in fact out of the two of us I can say Ian was a little more pro-risk. By nature I am quite conservative and so between us we balanced out the decision-making really well. We took a conservative approach and aimed for podium positions. Certainly, I was very lucky as a navigator to be put in a position where this was possible, to have such a strong, fast team around me.

SH: On the shore you had navigator and routeur Marcel Van Trieste to assist the team. How much of a difference did a resource like that make?

SF: Clearly that was a huge asset. Working with Marcel and Chris Bedford was fantastic, to work with people of the calibre of both these guys was invaluable. The approach we took to preparing each leg worked well. We were very diligent on what we could predict, but also looking carefully at what was beyond what we could predict. We tried to always have a good grasp of what normally happens in a certain part of the ocean so that what unfolds doesn’t come as a surprise.

And that worked. When you are in a difficult spot, having to make a decision with such a tight fleet, prior knowledge and proper discussion of the options makes the decision-making both easier and also more likely to be correct.

SH: With the VOR so close now and stopovers so tight, this shoreside brainstrust is vital.

SF: The last week of the stopover is incredibly busy now… From preparing the boat, doing the pro-am, prizegiving, in-port race and media stuff, to have someone else just working away made a huge difference, looking at how things are developing over the next leg while I am buzzing in and out of meetings or out sailing. There was more than one occasion when Marcel would sit up all night, looking at things developing, chatting on Skype with Chris, just making sure we had the best possible information.

SH: Is this level of back-up necessary now?

SF: Well, it certainly helped us! This fleet is so close now with the transition to onedesign I would say, yes, it is necessary. Before the last VOR with Abu Dhabi we focused on areas that could make a difference, and our decision-making was one of them. If you focus on putting yourself in the best possible position to make the best possible decision, that is huge. With the next edition of the VOR, the knowledge of the boats has now increased so that everyone will know the boats much better and will be faster straight out of the gate.

SH: You mentioned AIS, how much do you think that influenced the last race?

SF: With AIS it is easier to keep doing what you are doing when you can see everyone moving along around you. It is a tool, and you need to use it and learn how to get the best out of it but not let it lead you. It’s quite funny when you are looking at a boat in real time, you almost end up two-boat testing… even though you are five miles apart and obviously in different winds. So it can be misleading! But it did lead to people sticking together, as if you can see you are doing the same speed, then why do anything different if there is any risk involved. So if AIS is to sometimes be turned off next time I’m sure you will see the fleet then split a bit more.

SH: How much do you think the new scoring system will change the race…

SF: I think it’s good that the traditional ‘big’ Volvo legs are now double-points. But with those double-points up for grabs, the teams not doing well in the race may start to take risks while strong teams will want to stay conservative, not wishing to lose points. I’m thinking about another future option of making the lower placings all equal in points, then stack the points towards winning so you couldn’t get points worse than a fifth. That means the punishment for taking a risk that doesn’t play out is less. A bit like Formula One, the rewards for winning are greater. I think it may liven things up quite a bit more.

SH: Double-points are up for grabs relatively early in the race on Leg 3. So you need everything sorted before leaving Cape Town…

SF: Exactly. The first leg to Lisbon is short but quite difficult. Last time trying to exit the Mediterranean the fleet positions turned inside out three or four times. I remember we just wanted to be with the fleet getting past Gibraltar, and then things would unfold in a more regular fashion. This time the sprint around to Lisbon could be anyone’s race, and so that leg might not reflect the true form at that stage. Then the leg down to Cape Town is a big learner and the first real test for everyone; so, yes, if you are serious about winning the next race, you are going to have to be really sorted by Cape Town.

SH: What about ice gates, would you want to make a decision onboard or would you favour the race committee?

SF: I think it’s a difficult one. With the information that is now out there it is hard for the race committee to let you go freely into places they know there is ice. We had a lot of discussion before leg five of the last race, as we in the team had knowledge that differed from the Volvo line, so obviously we pushed hard to make sure everyone was safe. As a navigator, while you want to be given as open a racecourse as poss - ible, you don’t want to be forced to make a decision to put yourself at risk for a sporting gain. It’s difficult – but being deeply conservative and keeping people hundreds of miles from the ice is not the answer. Then again with a hungry bunch of guys like this leaving it open will always be risky… So a consensus that is sensible and safe is probably the right way to go.

SH: Richard Mason said in previous races he was racing down at 60°S… in winter that’s frozen land.

SF: Exactly. I have mates in the race who have encountered icebergs and aren’t too keen to repeat it. Spectacular to see but you don’t want one scraping down your leeward side at night…

SH: Blackout periods. If you had this option in the last VOR, would you have liked more than one per leg?

SF: In previous races we had the opportunity to go off the radar for 24 hours in stealth mode and I had a mixed reaction to it. It was good if you were onto something to gain additional leverage, but with only one stealth period it was hard to say when to use it. Multiple options to use stealth mode could prove much more interesting.

SH: Weather data blackouts… leaving crews to use their initiative?

SF: That is an interesting one and, having never done it, it is difficult to comment. But I could see times when it could unfairly benefit a team if there was a fleet-wide weather blackout and one boat was in a critical position while another had already made it through that critical spot – it could unduly hamper one and excessively benefit another. If one boat is already out of the doldrums in the trades and another is dealing with clouds, wanting satellite images and every model available to help you then the consequence could be massive. Quite possibly irrevocable.

SH: All the navigators are very experienced so how do you think a weather blackout would play to the personalities?

SF: Typically navigators who keep coming back know the game well. And these guys come from different backgrounds. Some are meteorologists, some with electronics backgrounds, you see a lot of different styles. A lot of it is to do with risk management and how people play that game. But, yes, this really plays out with our different personalities. And it can get interesting… SH: And this next race? SF: I haven’t signed up yet, but the pull of the race only ever gets stronger. This event has been a big part of my life and cont - inues to be – so it’s very hard to leave it alone. I’m sure I will be there in some capacity come October…