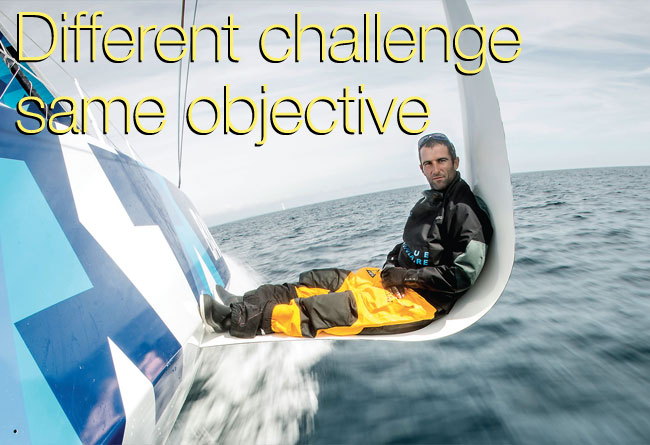 Offshore…
The coming year is a big one for round-the-world racing, with the Vendée Globe reaching its climax at the start of 2017 and the Volvo Ocean Race kicking off at the end of the year. Musto is closely involved in both events, with three of the big Vendée names opting to partner with Musto for their three-month solo circumnavigation. Musto is also the official clothing partner for the Volvo, with a number of crews choosing to wear Musto for their own nine-month adventure around the planet.

Main picture: Heading into the Vendée Globe as favourite, Banque Populaire skipper Armel Le Cléac’h makes full use of the relaxation facilities on his latest VPLP-Verdier Imoca 60. Runner-up last time, Le Cléac’h is ready to go one better – though before the start there were a few nerves on show about those radical but effective Dali foils

One man who knows both events better than most is new CEO of the Volvo Ocean Race, Mark Turner. It was Turner who ran Ellen MacArthur’s Vendée Globe campaign in 2000 when the diminutive 24-year-old finished runner-up at her first attempt on the solo classic. MacArthur was wearing Musto then and Turner has worked closely with the British brand ever since.

‘I think from a technical perspective Musto has been the most consistent performer,’ says Turner. ‘If you want to know you’re going to be protected in the best possible way in an offshore environment, you will never go wrong with Musto. And I think any sailor would agree with that. There are plenty of other products, obviously, so there are choices, but the one brand that you know from an offshore perspective that is going to give you at least as good, if not better, than anything else, is going to be Musto.’

Turner says the kit Ellen was wearing was very good, but that things have moved on apace since then. ‘The development since has just made everything lighter, more flexible and more comfortable. In the old days it felt like you were putting on a straightjacket sometimes, especially as it was still probably wet from the last time you came off watch. It used to be a bit of a mission to put your kit on, especially if you were by yourself in the Vendée. Now you see people wearing offshore gear that for its light weight and flexibility we would have considered to be inshore wear a decade ago.’

In the 2016/17 Vendée three of the French favourites – Jérémie Beyou, Vincent Riou and Armel Le Cléac’h – are wearing Musto. Competing in his third solo circumnavigation, the 40-year-old Beyou has won the Solitaire du Figaro three times. But he has yet to finish a Vendée and the Maître Coq skipper will be looking to put that right at his third attempt.

Riou, a former understudy to the legendary Michel Desjoyeaux, won the Vendée at his first attempt back in 2005, so the PRB skipper knows what it takes to top the toughest of podiums. But arguably the favourite is Armel Le Cléac’h, runner-up in the past two editions and meticulously prepared for this one. ‘For me those two second places were very different,’ says Le Cléac’h. ‘Eight years ago, my first Vendée, I ended up second with a lot of luck. Many of the boats ahead of me failed to finish, which opened up the way for a podium.

‘But four years later it was another kind of race because I was racing for victory almost until the end. So that time it was disappointing to be so close but to miss out on winning. So this year there is only one goal: to win. Being second again, or any other position, would be a failure.’

The 39-year-old skipper of Banque Populaire is one of the best-prepared sailors in the world and for his three-month solo circumnavigation he plans to leave as little to chance as possible. He is very comfortable with his choice of Musto to keep him operating at the highest level for the 80-odd days that he’ll be at sea.

‘For my first Vendée Globe I wasn’t yet working with Musto. I had an arrangement with another company, but I was still using some of Musto’s outer layers because for me they were the best-performing option, offering the highest level of waterproofness for a challenge as tough as the Vendée. Then when I started working with Banque Populaire back in 2011, during the build-up to the last Vendée, that’s when I started working closely with Musto and I have been happy with our partnership ever since.’

A Vendée skipper has to cope with the whole range of climates and conditions, from the stifling heat of the tropics to the unrelenting chill of the Southern Ocean. ‘For a long time Musto have been at the forefront of using different layers to deal with changing temperatures,’ says Le Cléac’h. ‘The layering system was already working well for me in the last race and the products have continued to improve since. This time I have no worries about comfort racing around the world.’ 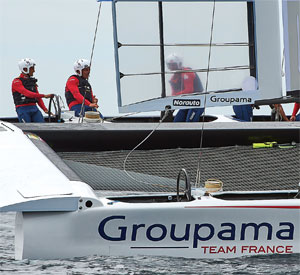 While Armel Le Cléac’h will be at sea for over two months Franck Cammas and his America’s Cup team get to sleep in a dry bed each night. But while AC clothing demands are very different to those of a Vendée Globe skipper, the challenge for the clothing supplier is just as big. The technical clothing worn by today’s AC crews must obviously always remain waterproof, but it must do so while offering maximum flexibility to conserve energy plus physical protection against high speed impact. Not an easy balance to strike...

And inshore too…
The Vendée Globe is all about energy preservation, keeping the skipper as dry and comfortable as possible for the 80-day ‘journey’ around the world. In the America’s Cup the races are just 20 minutes long, and the technical challenge for Musto – working with Franck Cammas and Groupama Team France – is quite different.

Cammas explains some of the challenges onboard a foiling AC50 as it hurtles above the surface at up to 50kt. ‘Wind chill is no longer a problem because the materials in modern technical clothing are now so good, although noise in the helmet is an issue,’ he says.

‘But breathability is critical as the guys on the boat are working at around 400 watts’ physical output, so we need the body to be working at a comfortable temperature and not to overheat through exertion.’

It’s some measure of how the Cup has changed that teams are now using the same language as Tour de France cyclists, where 400 watts of physical output is the typical number being generated by only the world’s very best road cyclists. ‘In a 20-minute race the crew are operating at an average of around 400 watts, but with peaks of around 630 watts for 30-second bursts,’ says Cammas.

Aside from the typical demands of the sailor for high levels of waterproofness and breathability there is the new requirement for impact protection. Foiling is still a new science and the boats can spin out with little notice, sometimes resulting in nosedives that can bring the boat to a dead stop from 30kt in the blink of an eye. If you can imagine going from 30 to zero in a car without a seatbelt, then you have some idea why impact protection is a priority.

Musto has been working hard with Cammas’s team to develop impact protection that can be inserted into neoprene garments. ‘We need body protection pretty much everywhere,’ says Cammas. According to Musto design manager Shane Rhone, the company’s latest AC50 outfits feature 16 impactprotection pockets: one for the spine, one for the coccyx and two each for shoulders, elbows, forearms, hips, knees, shins and upper side thighs. ‘We now use D3O, which is recognised as one of the best impact-protection solutions on the market,’ says Rhone.

Cammas is pleased with developments. ‘The crashes are hard and they hurt so we need the protection, but we also need to be able to retain movement and flexibility. It’s a difficult challenge but it is interesting working with Musto on this new problem.’