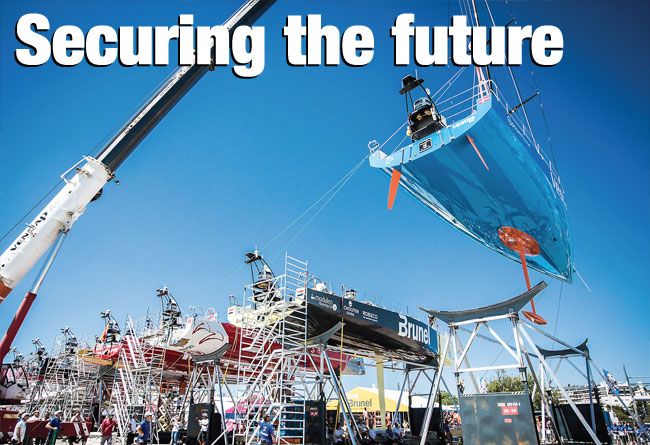 One of the biggest successes of the last Volvo Ocean Race was the boatyard, centralising much of the work – and costs – of keeping a fleet of much-abused grand prix race yachts at the top of their game. Blue Robinson looks ahead to 2017-18 with boatyard manager Nick Bice

Seahorse Magazine: How did the VOR boatyard evolve through the last race?

Nick Bice:For us the period of greatest evolution was before the event actually started. We spent a lot of time developing what we wanted to provide, yet not really knowing precisely how it was all going to work. A big part of that of course was how much the teams were going to trust us on what we said we were going to achieve.

Alicante before the start during the assembly period was probably the most difficult ‘stopover’. We had 50 people there, starting up the boatyard – but as the race went on the servicing obviously became steadily faster and more refined.

Main picture: A proud moment as the rebuilt VO65 Vestas at last rejoins the 2014/15 race in Lisbon, after a sad intermission when (now ex) navigator Wouter Verbraak discovered why digital technology is not yet quite ready to entirely replace homo sapiens with all of its often painfully acquired experiences...

SH: What did the boatyard do well… and what not so well?

NB: The best thing we did was develop as a team, getting to the point where everyone respected each other, the project, the race, the teams in the race and all the other shore staff. What was the hardest thing was that it took a lot of our time to gain the full trust of the teams. It was such a huge shift from what the teams were used to, and what we learned was that we needed to educate the teams a lot more on what we were doing – not just one or two in each team, but the whole team.

SH: Throughout this one-design race were you still selling the concept of fairness?

NB: At times we were challenged, if it was still 100 per cent one-design – I believe we demonstrated it was. I personally got out the measuring equipment so that I could stand there and prove it to teams, rather than just tell them it was so. And, yes, we were always defending this position, as throughout the race the teams would always find their niche. Dongfeng were especially good sailing downwind in light air and other teams had different strengths at different times; but this is yacht racing and the VO65s are tweaky boats.

To continue on the same theme, the upcoming refits of the boats involve a totally transparent open-book measurement system. Any member of any team can be on site during the weighing or launching. We are also bringing in Jack Lloyd, the former race director, who will effectively become the VO65 compliance officer so, as every boat comes into and progresses through the refit, he will be recording every piece of data.

Actually, not many people realise how much time and investment have already gone into the refit programme. Volvo have turned one of Lisbon’s old fish markets into a state-of-the-art boatbuilding facility and the refit of each boat will take about 15-weeks and cost around €1million. It is definitely not a small deal. 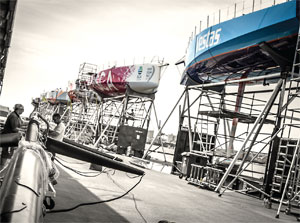 Above: the tangle of lightweight scaffolding and scissor lifts needed to work on such deep draft boats joins the many tons of equipment making up the Volvo Race boatyard in following the race fleet around the world – demanding set-up and strike schedules similar to what goes on in the Formula 1 paddock when nobody is there to see the less glamorous side of a ‘glamorous’ sport.

Below: the boatyard takes pride of place inside every Volvo race village. 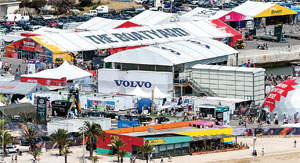 SH: What recommendations for boat improvements came from your team?

NB: Most of the refit is based around reliability. The boats have done around 70,000 miles and by the end of the next race it will be close to 150,000 miles. That is a lot of miles for a raceboat, so reliability remains the number one priority. Performance is probably bottom of the list in the sense that the boats are one-design, we are not interested in making them five hours quicker around the world. What we are interested in is that the boats start and finish the next race, keeping the crews safe and telling our story. So there are new ideas for cameras, what the crew are allowed and not allowed to do in terms of media. The boats will look new and will have some refinements, such as replacing structural elements of the winch system to ensure that longevity. We have been pragmatic here, we do have a budget, but we believe every boat that comes out of the refit will be able to race around the world without reliability issues.

NB: There have been various theories about that but the critical evidence is sitting at the bottom of the Southern Ocean. They did have a pretty rough time down there with a number of Chinese gybes… We also had a bit of rig damage on Mapfre, but this may also have been caused by a crash gybe.

SH: So far you have progressed from VO60 boatbuilder with Amer Sports in 2001/02, to sailor to boatyard manager. How is your relationship with the race going to evolve from here?

NB: I will step away from the day-to-day running of the boatyard as we know it, and so next year I want to concentrate on securing the future of the race – not just for the next edition but for the next 10 or 20 years. As good as the race is, it has a reputation for being stop-start due to its three-year cycle, so what we want is to get continuity using different concepts and/or different boats at different times.

SH: I have had plenty of feedback from both sailors and mainstream fans for the past three editions of the VOR saying that, aside from the images coming off the boats, the bulk of the media content from the boats has actually been poor…

NB: That can change by me putting myself more into the loop. It has been difficult when the onboard media guy reports directly to the skipper – we are probably only getting five per cent of the story off the boats… at best. This time we want to create something different. I am now in regular dialogue with designers and suppliers, but it’s important for me to listen with an open mind rather than just impose the concepts that we think are right.

SH: Everything is driven by sponsors coming into the race. So given that for these guys the ROI is everything – and this may sound outrageous – I believe the media person is one of the most important people on the boat. Getting the right exposure off the boat means that as a sponsor you can continue to win even without doing all that well in the race.

NB: In this communication climate there is no excuse for the quality from the boats not to be what we are used to seeing in news broadcasts every night of the week. And you are right, a sponsor is not interested whether the boat is a VO65 or an Imoca 60 or a MOD 70… they just want a platform to help them develop their business. Doing that successfully translates to more longevity and continuity, encouraging repeat sponsorships. Which would obviously be good for sailors as well.

Most of our sailors currently come from the inshore big boat circuits, so that if they drop out of those for 15 months to race a Volvo they then have to get back into those programmes afterwards. That can be a tough call… there are plenty of hungry guys after a limited number of good slots. Our goal is to create a programme so the sailors want to race the VOR regularly.

SH: This programme would be…

NB: Ideally teams and sponsors can commit to something ongoing. Instead of a campaign model with a big lump sum for the ‘main event’, they could see it as a continuous annual endorsement, with us introducing regular – desirable – activity each year to make it happen. This means that while we will be looking at new boats after the 2017/18 event we will also be reviewing both the cycle and the format.

SH: Can VO65s be turboed for future use?

NB: Absolutely. The advantage we have is we are not constrained by any particular rule. For example, unlike the Imocas, with limits on their new J foils we can juggle new appendages how we want. We can put elevators on the rudders, for example, we can put lift foils a lot further aft to get beneath the boat’s centre of gravity. These are just a few ideas, but definitely they can be turboed. Imagine too what we can do above the waterline.

SH: People have been writing these boats off after the next race, but you’re hinting that this might not be the case…

NB: Absolutely not. They are great boats. The design brief was bang on. You could argue they are too strong and so people haven’t had the big breakages and dramas in the Southern Ocean to write about. But I made it very clear from the beginning that I didn’t want the endless breakdowns that had so disrupted the previous races. Especially when the Volvo 70s were around…