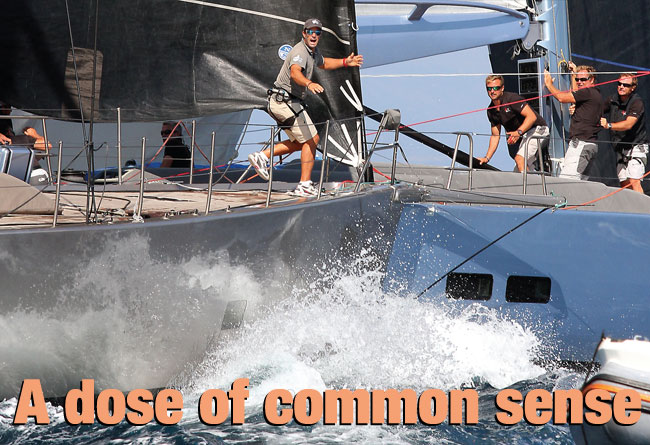 And we have some new rules... JON NAPIER

On 1 January 2017 the new edition of the World Sailing Racing Rules of Sailing will come into effect. Over the past four years World Sailing has received and considered proposals from all over the world on how the rulebook should evolve. The final result was published in July and is available as a free download on the World Sailing website, with the rule changes coming into force at the start of 2017. Not all changes are mentioned here but this is a summary of those that are probably the most significant.

Main picture: The pressure on a jury is never greater than when large sums of money and insurance companies become involved – underwriters often now stipulate that a full hearing will be necessary even if an agreement has been reached through arbitration. This expensive day’s yachting was at Les Voiles de St Tropez when Wally Tilakkhana speared Wally Ryokan 2. There’s a joke in there somewhere…

The biggest change to the rules affecting when boats meet on the water is to rule 18.3 (tacking in the zone). The rewritten rule will only make a difference in the case of a starboard-hand mark rounding or when both boats tack inside the zone (port-hand roundings are unaffected). A boat that tacked in the zone must also be fetching the mark after the tack if the amended rule is to apply.

Under the revised rule, at a starboard-rounding mark a boat tacking in the zone from starboard to port must complete her tack while keeping clear of boats approaching on port tack (as normal) and must keep clear of these boats if they become overlapped to leeward during the rounding. However, the boat that tacked will no longer break rule 18 if she causes the other (port tack) boats to sail above close-hauled to avoid her after she completes her tack (which was the case previously).

Another change to the right of way rules concerns the backing of a sail. This is a result of the increasing practice at startlines of dinghies crabbing to windward by backing a sail, with the effect that a windward boat finds it almost impossible to keep clear. New rule 22.3 provides that a boat crabbing must keep clear of one that is not (similar to the existing rule that places the onus of keeping clear on a boat that may be backing down at a startline).

Lastly, in the right of way rules the power to disqualify a boat from a race because of an incident that occurs outside racing (eg before the preparatory signal or after the finish) has been extended to include incidents where injury or serious damage are caused.

Looking to other aspects of the new rules, the U Flag starting penalty is now a standard option for race officers to use following positive feedback during trials. The rule operates in much the same way as the Black Flag rule: if a boat is over the line in the final minute of the start sequence she is disqualified. However, disqualification is avoided if the race is restarted or resailed (which is not always the case when starting under a Black Flag).

There have also been large-scale changes to rules 3 and 69 concerning acceptance of the rules and misconduct. The requirement for misconduct to be ‘gross’ has been removed and protest committees can impose a wider range of penalties at the event before a report is required to be submitted to the national authority.

Other changes to the rules include: