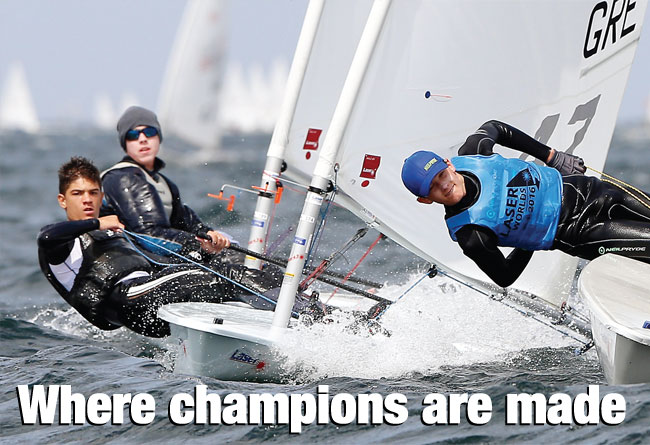 Main picture: Guido Gallinaro of Italy took five bullets in Kiel but was still edged out for the Boys’ Under-18 Laser 4.7 title by Dimitrios Papadimitriou of Greece… by just one point. This was indeed a ‘big’ regatta, with 127 girls and 262 boys competing in the Under-18 fleets alone… plus another 292 entries in the Under-21s

So often we’ve seen the battle for Olympic titles come down to a two-horse race, a match race for gold and silver. This summer’s Laser 4.7 World Championships and Laser U21 Youth World Championships in Kiel, Germany, brought one of the most dramatic showdowns between two world-class talents, two names to watch out for on the Olympic circuit.

In the boys’ division of the Laser 4.7 Youth Worlds, Guido Gallinaro won the penultimate race of the competition with ease, and looked set to defend the world title he’d won in 2015. His closest competitor, Dimitrios Papadimitriou, had only managed 11th. It would take a minor miracle for the Greek to overturn the Italian’s advantage.

‘My coach told me I can win it, and I said OK, I will go out and win the race and do my best,’ said Papadimitriou. He went out and executed the plan perfectly, winning the final race by 1 minute 48 seconds, a country mile in Laser terms. Now he would have to wait to see how Gallinaro fared.

Papadimitriou could scarcely believe his eyes as the Italian struggled across the line in an uncharacteristic 40th place, never having managed to find a way back to the front after a poor start. Papadimitriou had won his first world championship by a single point.

For Gallinaro it was a cruel way to lose the championship, having had one hand on the title… Even more cruel was the fact that history was repeating itself. Earlier in the year at the Europeans it was another close battle between the Italian and the Greek, and there too it was Papadimitriou who emerged victorious. No doubt Gallinaro will be keen for revenge… the dawn of another epic rivalry in the Laser, perhaps? Another Ainslie versus Scheidt duel come Tokyo 2020…

Vagelis Chimonas, Papadimitriou’s coach, certainly believes we are looking at a young sailor of exceptional talent, one who can remain calm in the most pressured of situations. ‘I have known Dimitrios for two years now, and I will work with him in the future in the Laser Radial too. We can expect a lot more from him.’

Organised by the Kieler Yacht Club, these Laser championships threw a little bit of everything at the 681 competitors in terms of weather, from sunshine to rain, and from 5kt to 25kt of wind. There were four championship titles up for grabs, and each of the four champions could truly claim to be an all-rounder. The specialists had their day, but this was a week where the varied conditions demanded a full complement of boathandling, boatspeed and tactical skills.

Emma Savelon had sailed a very consistent regatta but on the final day had to hold off a late charge from Russian sailor Mariia Kislukhina who won both final heats in the girls’ division of the Laser 4.7 Youths. But the Dutch competitor held her nerve to score two seventh places, sufficient to give Savelon the world title by 7pt from the Russian. 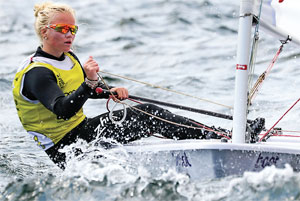 Above: the impressive Finnish sailor Monika Mikkola won the Women’s Laser Radial world title by a chunky 16pt margin from runner-up Vasileia Karachaliou of Greece. In fact, Greece had a very strong regatta in Kiel, picking up a number of medals which bodes well for Tokyo 2020. The Kiel event was also ‘big’ off the water, with an Olympian opening parade (below) and later on a similarly well organised closing ceremony

While the 16-year-old sailor from Medemblik had kept her cool on the racecourse, all the pent-up emotion came pouring out as she stepped ashore, exhausted but elated. ‘It hasn’t sunk in yet, what I’ve done. That second race was very tough. My start was far from perfect, and I was on the wrong side of the course on the first upwind leg. Downwind I had to work hard just to keep going as fast as possible, and then had to get everything right on the last beat.’

In the 144-boat Under-21 division for the boys in the Laser Standard the battle came down to just 3pt, with Jonatan Vadnai of Hungary just beating defending champion Joel Rodriguez of Spain. ‘It’s a fantastic feeling,’ said Vadnai. ‘A three-point gap after 10 races is nothing. It’s been a great battle. This is a feeling I definitely hope to repeat in my career!’

The only clear victory of the championships was by Monika Mikkola, who dominated the Girls’ division of the Under-21 Radial fleet. It’s a measure of the challenging conditions in Kiel that even the eventual winner capsized on more than one occasion. But Mikkola kept her composure and the 20-year-old Finn led from day one, notching up four wins and two seconds along the way. With her worst scores a 5th and 6th, Mikkola didn’t even need to race the final day. It was the perfect way to round off a glittering career at junior level.

It might not be so easy when Mikkola steps up to the Olympic circuit next season. ‘This was the last year I qualify at this age level, so it was great to win in Kiel. It will probably be a while before I win anything again…’ she added modestly. Mikkola now looks forward to the rigours of campaigning for Tokyo 2020. Vasileia Karachaliou took another silver for Greece with Maité Carlier of Belgium taking bronze.

With almost 700 entries this was a big regatta and, with four divisions, the logistical challenges were significant. But bearing in mind what the same organising team do every June – running Kieler Woche with 4,000 sailors competing in 2,000 boats in classes ranging from the 420 through to large keelboats of 50ft or more – the Laser Youth World Championship was a walk in the park in comparison.

One invaluable experience for the young competitors at such a big regatta was exposure to the media. The top sailors were interviewed after racing each day and for some the nerves of speaking in front of a camera and answering tough questions appeared to exceed the stresses of racing!

It’s one of the things that makes the Olympics so unique, and so difficult for some to cope with, the sudden deluge of media attention. What is impressive about the new generation of sailors coming through is how comfortable they are with working with the media. You can see for yourself if you look through some of the YouTube videos of the Laser regattas (laser4.7.laserworldskiel2016.com) Another benefit for sailors, coaches and also some of the spectators around the world is the relatively recent facility to scroll back through the live tracking and commentary on previous races held at Kiel. Thanks to SAP Analytics, the sailors can review their own performance and see what were the winning – and losing – moves on the racetrack.