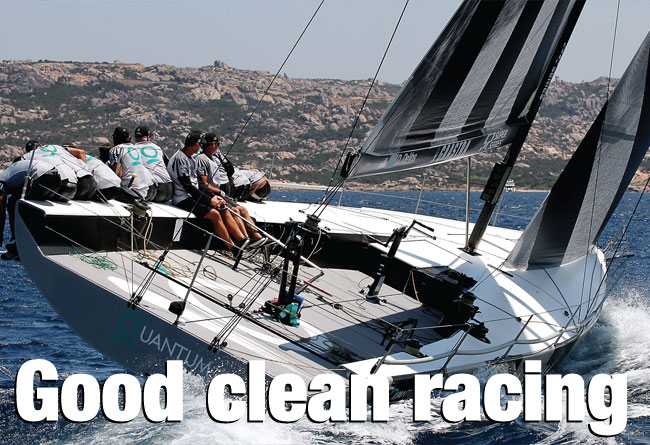 Life always feels a bit more than full-on each and every day of a typical 52 Super Series regatta. Among those under most time pressure this season have been the shore crews. Up until an August hiatus prompted by the Olympics their schedule has been extremely tight. The drive to ensure that each raceboat operates perfectly for every second that it is out on the water is never ending, magnified by how close the battle for every point has been this season.

Main picture: Quantum Racing practicing in Sardinia – enjoying the purest of pure grand prix machine. With the demise of the IOR ton classes and 50-footers in the 1990s, there was suddenly no reason to spend the time and money to research and build such a wonderfully single-purpose inshore racer – the TP52s rescued some of the best designers from a life of blandness for which they should be very grateful! Today however, the growing Fast40+ class offers a second outlet, currently centred in the UK but given some international exposure that class will also spread – like the TP52s before it. There is enough money around – don’t let anyone tell you otherwise

Under these circumstances it is gratifying that all the racing teams’ nominated ‘environmental ambassadors’, who are mostly drawn from the shore technicians, are still making it a priority to gather together at each event, discussing and developing new ways to fulfil their brief; the 52 Super Series wants to be at the sharp end in today’s efforts to deliver more sustainable, environmentally aware sailing events… a movement that, appropriately for a ‘green’ activity, is starting to gain momentum across the sport.

Midway into the second year of the circuit’s partnership with environmental consultants 11th Hour Racing, certain protocols are now part and parcel of regatta life. Single-use plastic bottles are no longer used by event staff. More and more race crews are also taking reusable containers each morning to draw their own drinking water from the circuit’s travelling filtration unit. When sailors are drinking five or six litres of water each day out on the water, that is a useful reduction in plastic bottle use. In practical terms this means that the disposal of a potential 6,500 single-use bottles can be eliminated over a Super Series season.

Local school and sailing club youngsters are also regularly invited to participate in our beach and harbour clean-ups, now an obligation at every Super Series round. As well as removing significant detritus this initiative has prompted some nice interactions between the young sailors and some of their most successful professional counterparts. Almost without fail these youngsters leave our regatta venues smiling, inspired by the sailing they have seen, the racers they have met and also the environmental message that they can take home with them.

With these considerations in mind, our transportation to and from the regatta venues is also now ‘optimised’. Where the host club or venue provides shuttle transport as part of the hosting agreement, then this is modelled to reduce journeys and maximise vehicle occupancy. Also, as not all sailors and staff want to commute to the site on their pride-and-joy road bike, we now require that each venue facilitates a favourable deal with a local bike hire company.

Even our mark layers, umpires and the teams’ RIB drivers have to meet new fuel-use limits to keep them on their toes!

‘Much of what we are doing revolves around education and awareness,’ says Lars Böcking, who is in charge of 52 Super Series sustainability. ‘We are all about doing the best that we can in our own little arena and taking responsibility. It’s simply about creating that thought bubble, and so helping others arrive at choices and decisions that in the long term are better for everybody. ‘But having said that, we do try to keep it all fun and relatively simple. We try to do it all with a smile. Of course there are sporting environmental groups and events that are more prescriptive, which maybe do it all better; we are realistic about what we are achieving.

But, for example, some of our initiatives and ideas can – we hope – trickle down to the local level. If sailing clubs and smaller, national regattas can at least take note of what we are trying to achieve then that is one more small success.’

Catherine Zennström of the Rán team is one person who always makes time to attend these ambassadors’ meetings. ‘As sailors we are living with and using our oceans all the time,’ says Zennström. ‘As such we cannot not respect and look after them.

‘That is simply a part of going sailboat racing in 2016.’