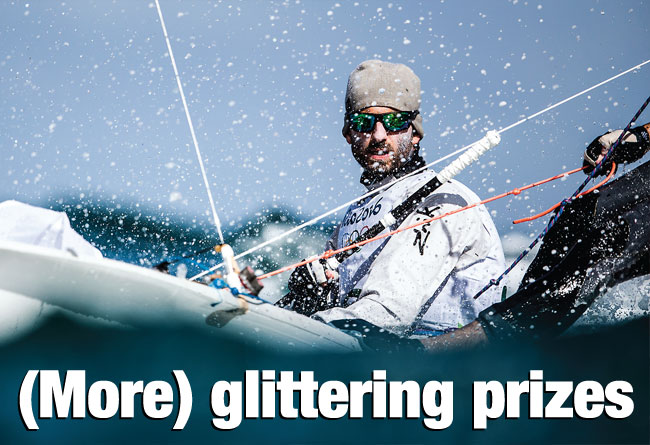 The Rolex World Sailor of the Year Awards will take centre stage this month in Barcelona as the highest achievements within the sport are recognised. Starting with Sir Peter Blake (NZL), Sir Robin Knox-Johnston (GBR) and Theresa Zabell (ESP) in 1994, the distinct marble and silver trophy has proudly been accumulating the names of those who have demonstrated sporting excellence.

Main picture: London 2012 silver medallist in the Men’s 470, Luke Patience of Great Britain, racing in Rio with crew Chris ‘Twiggy’ Grube. The Patience/Grube pairing only came together eight months before the Games after Patience’s original crew Elliot Willis was diagnosed with cancer. This new British team was in the hunt for a medal for most of the regatta but eventually finished in fifth

In the aftermath of the Rio 2016 Olympic and Paralympic sailing competitions, gold medallists boasting heroic and outstanding success stories are inevitably expected to fill the shortlists in both the male and female categories. Since Atlanta 1996, Olympic sailors have dominated the Rolex World Sailor of the Year Awards in an Olympic year. Inspiring gold medallists such as Santiago Lange (ARG), Charline Picon (FRA), Dorian van Rijsselberghe (NED) and Martine Grael and Kahena Kunze (BRA), to name but a few, have all delivered recent performances worthy of any shortlist – and this month in Barcelona will be no exception.

Stronger together
The business of sport is going through big changes, with greater emphasis on digital media, the importance of fan engagement in a voraciously content-hungry world and the need to create commercial properties that excite sponsors in an increasingly crowded marketplace. International federations not only have to adapt to and seize these opportunities themselves, but they also need to provide the platforms that enable their worldwide stakeholders to be better equipped to meet these new challenges.

Starting this year, one immediate goal at World Sailing is to modernise our own annual conference, creating a professional, engaging and interactive event that can become the de facto annual gathering for the whole sport, in turn helping us to attract new host cities for regattas and new commercial supporters.

In the immediate term, World Sailing will be a major presence at the 2016 Yacht Racing Forum in Malta this month, with a delegation of senior representatives in attendance. There will be a keynote opening presentation at the forum from World Sailing CEO Andy Hunt, plus presentations on Rio 2016 and on World Sailing’s future vision for the sport. World Sailing’s own 2016 conference takes place in Barcelona just prior to this year’s forum, allowing plenty of discussion before our ‘forum team’ travel on to Malta.

This year’s conference will embrace new topics under an overall theme of ‘our sustainable future’; three individual conferences will in turn be headed Commercial Strategy for the Sport, Para World Sailing and Sustainability. The three forums will offer the opportunity to hear from leading experts on each topic, as well as take part in open discussions in which best-practice can be shared.

Confirmed speakers include Mark Turner, Volvo Ocean Race CEO, Jerry Newman, head of sport at Facebook, and British sailor and Paralympic sailing visionary Geoff Holt, who has been an ardent campaigner to reinstate Paralympic sailing for 2024. The three forums will be mixed in with World Sailing’s usual comprehensive schedule of meetings of members held throughout the conference, the recommendations of these groups then going up for consideration by the World Sailing Council at the end of the week.

Concluding the annual conference on Sunday 13 November will be the General Assembly, a four-yearly meeting that will decide World Sailing’s board of directors, including president and vice-presidents for the next four years.
Daniel Smith, Rio de Janeiro