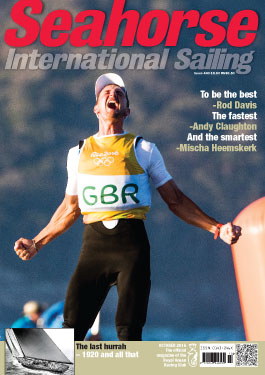 Bienvenue
Little-known outside his native Argentina it’s time to turn the spotlight on designer SEBASTIAN CARLINI... It’s worked here before

Citius – Altius – Fortius
JUAN GARAY and PAUL HOBSON have long been at the heart of the UK’s extraordinary and enduring Olympic success in the Finn class. They talk sails with DOBBS DAVIS

New bat new balls
It’s not just about the new, more agile and faster America’s Cup cats, everything else is going to be different in Bermuda, in particular how the AC50 crews actually ‘sail the course’ – as BAR head of technology ANDY CLAUGHTON explains

Trickle up...
MISCHA HEEMSKERK won all seven races at the A-Class world championship in a 118-boat fleet. Fair reward for three years of intensive development creating and then perfecting an all-new rig system

The new testament
Tom Whidden and Michael Levitt have revisited their legendary tome on sail design and manufacture. The result is rather special

Experience, resources, delivery
With immaculately-finished M32s rolling regularly out of the door Aston Harald are ready for some much larger challenges

World news
(Another) win for France, development is not always swift, round and round in Auckland, the shoreside challenge of the Cup and the welcome return of the Wizard of Santa Cruz. BERNARD NIVELT, IVOR WILKINS, BLUE ROBINSON, PATRICE CARPENTIER, DOBBS DAVIS

Rod Davis
With Olympian timing... this gold (and silver) medallist strongly believes that put simply the best should never be enough

World Sailing – Nothing like it
Having survived intact CRAIG LEWECK offers an illuminating Rio perspective...

ORC column – Deciding your champions
It’s not always easy to meet championship criteria... even for the organisers

Design – Most of the fun (less than) half of the price
The quick success of the Fast40+ has prompted some interesting rivals. JAVIER SOTO ACEBAL