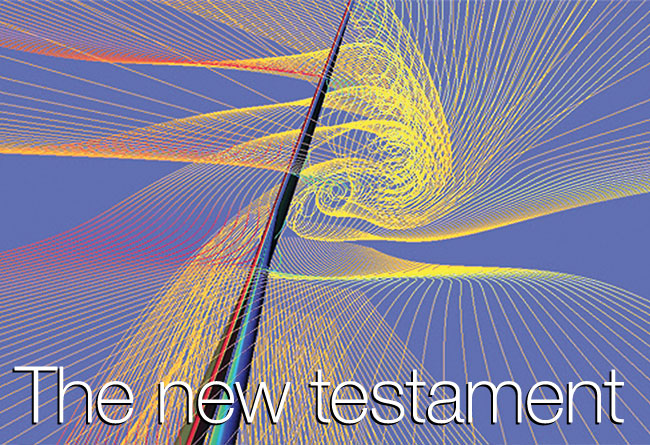 Main picture: looking back at rig and sails just from leeward shows the negative effects of tip vortex. This is a RANS code CFD analysis showing what happens at the top of a conventional mast sailing upwind. Circulation, (below) oft misunderstood, seldom accounted for, is critical to upwind performance. This book explains in depth both why and how circulation works and its significant contribution 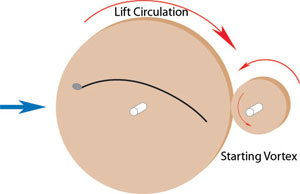 Our sport of sailboat racing is complicated. In fact, there may not be a sport as detailed, nuanced and, dare it be said, perplexing. The sheer difficulty of moving up the learning curve in sailboat racing surely has to be one of the reasons why our sport seems reluctant to grow.

For those who sail below the professional crewed level, a short time on a fully crewed boat, whether it be an Etchells or a Maxi 72, will drive home this point. To steal a line from a golfing ad, ‘these guys are good’. Clearly, the skills of these pros result from years of experience. It is their job. So what is the amateur sailor to do?

The same question would be asked of a rookie intending to climb Everest, or of someone about to train for their first marathon. The answer in the case of all three examples is to learn and understand the foundations of the sport. 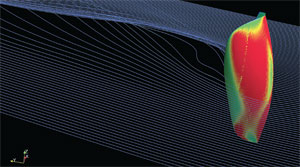 Above: a model of ‘wall stress’ or surface friction seen in one horizontal slice taken from a RANS analysis of an A-sail, showing areas of flow separation. Left: here’s one that Tom Whidden did earlier… Perfect sail twist, as demonstrated by the 1987 America’s Cup winner

One of those foundations is the sail, the engine of the sailboat. Tom Whidden, CEO of North Technology Group, with 40+ years’ racing at the highest level of the sport, and Michael Levitt, co-author and author of 13 other books focusing on our marine world, have expanded on this key foundation of racing and just plain sailing in their The Art and Science of Sails Revised Edition.

For those sufficiently old enough to remember, it was in 1990 that Tom and Michael published the first edition of The Art and Science of Sails. Since so much of sail technology has changed since then, Tom knew that a new edition was necessary. But, as work commenced, it quickly became clear that this book could not simply be just a revision. In essence, it’s a new take on the complex subject of sails. 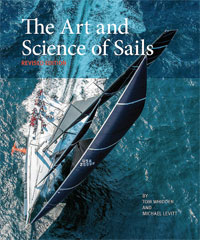 Above: Here’s one that Tom Whidden did earlier… Perfect sail twist, as demonstrated by the 1987 America’s Cup winner 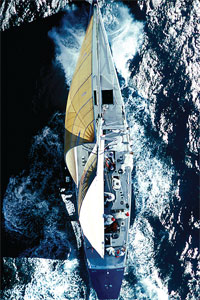 Yet it’s not just about sails. It’s as much about why and how sails work – aka aerodynamics – as it is about how today’s sails are designed and built. That said, if you’re talking detailed, nuanced and perplexing, aerodynamics is already as tough as it gets, rivalled only by hydrodynamics, the effect on sailboat performance of the water flowing past the hull and appendages.

Since it’s important to attract the reader to complex subjects, The Art and Science of Sails Revised Edition is also a fine-looking fullcolour production with numerous beautiful photographs of our sport, illuminating illustrations and some history both of sailmaking and their materials. It’s why this book will appeal equally to the beginner and the seasoned professional sailor.

However, it’s the aerodynamics that is the heart of this book. The vast literature of this subject seems pulled to the extremes – often so difficult to follow at one end and too simplistic and therefore potentially inaccurate on the other. Tom and Michael worked hard to marry this controversial topic – for example, did you know the flow through the ‘slot’ of a headsail and main is far slower than the onset flow – with the practicalities of trimming. And the issue of why sailmakers add leech twist to a sail is not met with the normal answer: ‘because it works’. The authors logically explain the aero dynamics in comprehensive but surprisingly clear detail.

Throughout this book theory and practice flow back and forth, leaving the reader with a knowledge foundation of exactly why correctly trimmed sails work best.

Over the years many excellent books have been written on sails and aerodynamics. Perhaps Manfred Curry was the first to attempt to explain in 1948. CA Marchaj wrote his treatise in 1964, which is still seen on the shelves of many sail and yacht designers – and to this day referred to as ‘the bible’ on sails.

The Art and Science of Sails Revised Edition in no way attempts to usurp the achievements of these groundbreaking authors. However, what it does do is make every attempt to render the complication of sails an approachable topic that is the key to successfully understanding how and why a sail performs. And, as you’d expect, inter woven with a review of today’s state-of-the-art is an accessible update on the still fast increasing role of computers in the analysis of sail design and performance.