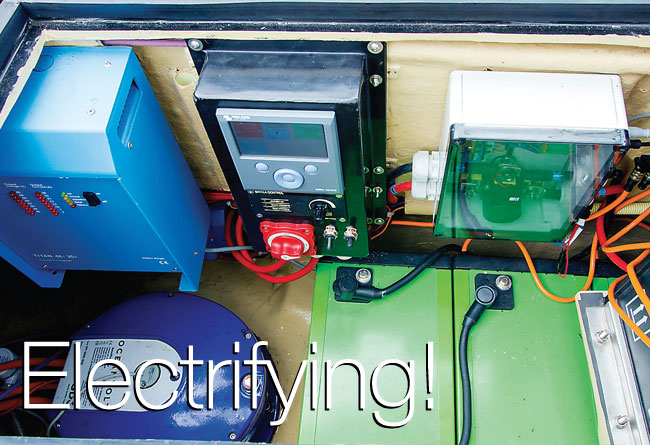 For the performance-conscious racing sailor there are now real advantages to be gained by letting an electric motor take care of both the driving and recharging requirements of your yacht. Time wasted at the filling station becomes a thing of the past and, of course, there are the fiscal benefits of virtually zero running costs.

At its base in Vantaa, Oceanvolt has spent over 10 years developing the latest generation of electric motors and accompanying shaft and saildrive units – patented, custom gear, specifically designed and built for the marine environment.

One of the new features of Oceanvolt’s set-up is the engine and its propeller being used not only to drive the vessel, but for battery charging too. Compared with transom hydrogenerators, seen on the Imoca 60s in the last Vendée Globe, using the engine propeller for charging offers significant advantages; unfolded, the main propeller is substantially larger and so can generate more power in less time. It is also more likely to remain immersed.

According to Oceanvolt’s Anssi Sallinen, another reason this tech - nology has become practical is the falling price of lithium ion batteries. Among marine batteries there are two fundamental types: engine starter, typically lead-acid which provide short, high-current bursts, but can be permanently damaged if discharged too much, and Deep Cycle batteries, designed to be run down before being recharged. Lithium ion batteries are the ultimate for deep cycling and can be discharged down to just 5-10% (as opposed to around 50%, at best, for a lead-acid start battery).

Compared to a lead-acid equivalent, Lithium ion batteries are around one-quarter the weight, last three to four times longer and, importantly, charge substantially faster. As Sallinen points out: ‘If you drive a Tesla you can recharge your car completely in 15 minutes.’

Oceanvolt offer two standard setups. Around 60% of sales are ‘pure electric’, ie with battery charging provided purely by the main propellerengine. The remainder are ‘hybrids’, with a back-up DC generator.

‘With a full charge the range of a purely electric boat is typically around 40 nautical miles,’ says Sallinen. With the hybrid it depends on the amount of fuel carried. He outlines a typical day with the former set-up: ‘You might motor for an hour out of harbour, then you sail for the day and motor back in for an hour. If you use the regeneration function (charging from the main propeller) while sailing, then you have a full battery when it’s time to return home.’ Four to five hours of sailing with the propeller deployed is enough to recharge the batteries.

Very clean and tidy both above and below the water. In the main image the propulsion battery pack is in green, the battery charger and inverter unit is at upper left in pale blue, the battery management unit is at the top right with a clear cover and the Oceanvolt SD motor and a very neat saildrive unit are bottom left in blue 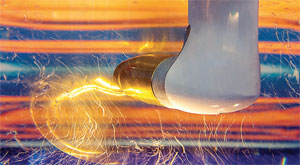 As to the performance of the electric engine compared to a diesel, there are no exhaust fumes, substantially less vibration, it’s quieter and has much more regular torque across the RPM range. ‘A diesel engine will only provide high torque at high RPM and the torque won’t be constant – it will drop as the resistance grows, which doesn’t happen with an electric engine,’ says Sallinen.

Oceanvolt offers a complete range of shaft and saildrives suitable for new installations or retrofitting. According to Sallinen, the Oceanvolt saildrives have been purpose- designed for electric power and are smaller with one-third the drag of an equivalent diesel drive. However, due to the high torque of electric engines, Oceanvolt recommends a propeller one size bigger than standard. Typically Oceanvolt packages come with a three-blade Gori or Flexofold folding propeller.

A public test of Oceanvolt’s gear will be in this winter’s Vendée Globe, forming the heart of Kiwi- American Conrad Colman’s system aboard his Natural Energy Imoca 60. Colman will carry fossil fuels for his generator, to comply with race rules, but intends not to use them, relying instead on Oceanvolt gear plus solar panels for extra charging.

In terms of weight, the electric engine is lighter, but Oceanvolt’s set-up requires a larger, heavier battery bank. As a result it typically weighs the same as an equivalent diesel engine but without the fuel. On a Vendée Globe this represents a massive saving, as much as 600kg, or around 8% of the boat’s displacement. However, an added benefit for raceboats is flexibility in weight distribution; for example, the battery bank in the Oceanvolt setup, its heaviest component, can be fitted as close to the top of the keel as you wish... rather more flexible than a typical diesel installation.