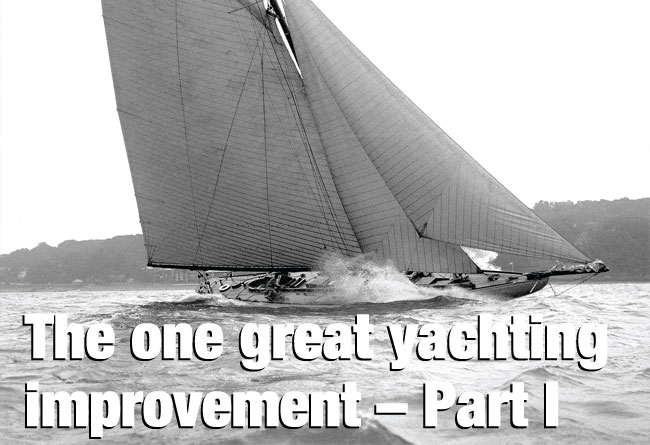 Change has many stories, most of them from the same book. The foils that lift today’s America’s Cup boats above the water to sail at breathtaking speeds may look new, but they were created using many of the ideas and theories that, a century ago, helped transform sailing. What follows is a snapshot of the early days of the modern Marconi rig (as I, an American, call it) and its immediate effect on the America’s Cup and on more ‘normal’ sailing.

After the gargantuan 144ft Reliance easily dispatched Shamrock III in the 1903 America’s Cup match off New York City, it took another 11 years before the New York Yacht Club tacitly agreed with Sir Thomas Lipton’s stubborn insistence that the next races be sailed in boats of a more reasonable size and expense. As Lipton’s 110-footer Shamrock IV was making her way under shortened rig across the Atlantic in early August 1914, her crew were notified by radio that much of the world was now at war. She found a safe haven in Bermuda, and eventually reached New York where she was hauled out at a Brooklyn shipyard. There she stayed for five years, her original flat sheer gradually hogging into an almost graceful upward curve as American sailors stopped by and speculated about the strengths and weaknesses of this extreme and unusual racing yacht.

Shamrock IV reflected the best guess of one of Britain’s best designers and builders, Charles E Nicholson, as to what it would take to finally wrest the America’s Cup away from America. Designed to the US measurement system that governed the races, the Universal Rule developed by Nathanael G Herreshoff, she had a big, powerful hull above a strikingly short waterline of 75ft, and sat under a vast cloud of sail. The vessel was nicknamed The Ugly Duckling, but nobody ever said a fast boat had to be a beauty queen.