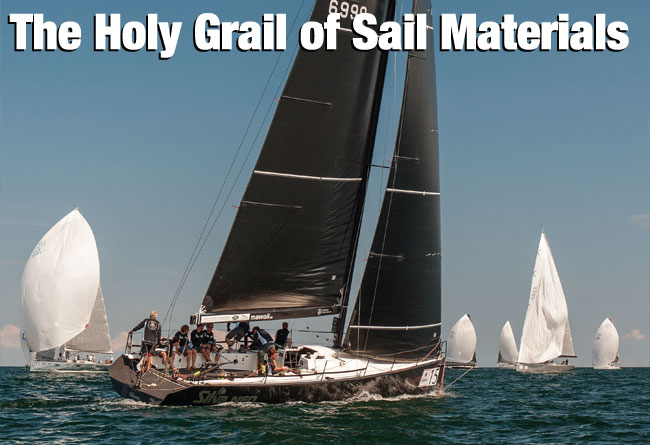 The marriage of film and fibre to produce lightweight sails is nothing new, but UK’s latest development in this field is taking a new approach that brings additional qualities to the laminate never seen before

It is fitting that the name UK has chosen for this new material is the very definition of strength, lightness, toughness and durability: TITANIUM.

The process to produce TITANIUM resides in a corner of Hong Kong that is off-limits to visitors due to the sensitivity UK Sailmakers has to revealing the numerous innovations developed in the production of this material that may be the Holy Grail of sail materials.

“It’s a lot of science, a good helping of art, and a pinch of black magic,” says UK Sailmakers’ Barry Hayes of UK Sailmakers’ massive loft in Hong Kong. “Titanium sails are true one-piece sails that have continuous yarns running between the corners of the sail. They are the latest chapter in a story that began back in the 1980’s with UK Tape-Drive.”

When first introduced, Tape-Drive represented a remarkable insight to knowing how to separate the load-bearing and the air-impermeability functions of a sail. Using carbon tapes that followed the computer predicted load paths between the corners of the sail, Tape-Drive was a leap forward in producing membranes that were strong in the right directions without having excess weight.

UK’s TITANIUM sails continue this heritage of innovation through a new process of building the film-fibre-laminate sails. It starts with two thin films made of tough PET that are coated with a co-polymer to comprise the outside faces of the construction, with the familiar pattern of load-bearing carbon fibres oriented along load paths in the sail. In Uni-TITANIUM sails, a uni-directional carbon cloth is also introduced between the skins to help further stabilize sail shape.

This construction method has the exterior films perform the combination of both the ‘finish’ and the glue that holds everything together. Shiny and weatherproof on the outside, the grey (or black) PET co-polymer skins are tacky on the inside, holding the whole layer cake together as it is constructed and also providing the resin that is going to melt down and through the interior elements, just like the cheese in a Reuben sandwich. There is no need for added glue on the fibres, which contributes to not only excess weight, but in time the brittle glues break down and can cause de-laminations.

Furthermore, that makes for lighter sails (by 15-30%), happier foredeck teams, and ultimately happier owners who are not replacing their mis-shapened and broken sails as often.

The PET film is a key element to the sandwich: at only 1.3 micrometers thick, this material provided by Dimension Polyant is incredibly tough, and will be most familiar for its use in plastic litre bottles and in some paper currencies - try tearing either of these apart. Sunlight and heat up to 50°C does nothing to PET, not even make it shrink like many other similar materials.

The other key element is the Carbon used in Uni-TITANIUM sails, which is extruded as a 2m-wide continuous fibre sheet for added strength yet with unmeasurable thinness. This looks similar to one of your old cassette tapes, but is a lot stronger and less likely to be used as emergency tell tales.

The four layers are dropped into a custom-formed variable geometry thermoform in which the sail is UV-bonded into one piece at 1 bar pressure under vacuum. This is a concave form, and the ‘variable geometry’ part is the unmentionable proprietary part of this process. Suffice to say the copolymer melts around the carbon fibres and then down through the unidirectional weave cloth, and the result is a whole that becomes substantially greater than the sum of its parts.

What’s happened here is that instead of applying the load path structural members to a pre-made sail membrane, the sail skin and load path structures have been fabricated as one integral product. The result is a sail that is formed to exactly the right shape, as stiff as cross-grain plywood thanks to the unidirectional panels, as strong as the carbon load-bearing fibres can make it, and – here’s the bonus – it is not subject to UV degradation. In fact, quite the opposite, because along with heat, ultraviolet light is part of the process that bonds everything together.

This unidirectional carbon cloth is also massively strong as well as gossamer light, and its job is to provide rigidity to resist the typical twisting forces found in a sail that is being pulled in four directions – from the head, the tack and the clew, as well as form the luff to the leech. 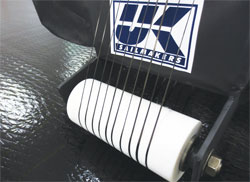 Hayes recalls how the development process started. “When we made our very first (Uni) Titanium sail there was inevitably a certain amount of experimentation,” he said, “a sort of suck-it-and-see process where the materials were concerned. We sandwiched three layers of unidirectional cloth into a No 3 jib built for Frank Pong’s R/P 76 JELIK. We knew the material was strong, but we didn’t expect the jib lead car to get ripped straight out of the deck! So it’s strong – stronger than we realised. JELIK’s present No 3 only has one layer of unidirectional in the sandwich, and it is holding up just fine.”

Another impressive result came recently at the ORC World Championship, where Heinz-Peter Schmidt’s GP 42 NEO SILVA team earned Bronze medals in Class A. They had high praise for their Uni-TITANIUM sails contributing to their success in a class of 27 boats from several nations.

“The sails were incredibly light and flexible, but also stable,” said Schmidt. “The trimmer’s work was much easier because the shapes never distorted, yet they could add depth and move the draft in the mainsail in a wide range of wind speed. The mainsail weighs only 25 kg, but we never have any problems when the wind is strong. In fact, our targets had to be adjusted because we were 0.3 knots faster upwind!”

Schmidt is no newcomer to success: his last boat won the ORC European Championship in 2011 and again last year, and was also equipped with UK sails. He credited his team’s ongoing success with the support he has received from the UK Sails operation in Germany, one of 50 lofts located around the world. It’s this strength in depth that has come together time and again over the decades to produce some of the finest racing sails in the world, with the latest of these being UK Titanium – strong, light, stiff, practically bulletproof, and beautifully engineered.