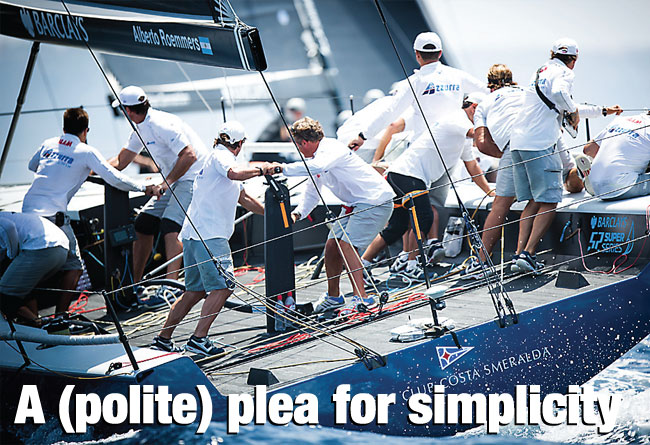 Yacht racing at the big boat end is both an international and a team pursuit, both in racing and in its organisation. In 2015 the 52 Super Series will see owners of around 10 nationalities and crew members of about 20 nationalities. The teams are quite large, up to 14 on a TP52, and with the shore crew in total quite often we are talking close to 20 people in a team.

Meanwhile, the race committees, umpires, Super Series staff are all made up of a mixture of nationalities. English is the language we use the most and for sure the official language of our sailing. Our rules are in English, whether ISAF rules, class rules, Super Series rules, and so on. It is the best option, as most in our world can master the English language to some degree. No other language has that ‘coverage’ within sailing.

The origin of our racing rules lies in the UK, but sailing and competing with boats has its origin closer to the Equator. The earliest representation of a boat under sail appears on a painted disc found in Kuwait, dating from 5,000-5,500BC. I am pretty sure that wherever you have two or more boats together their speed and ability were a matter of debate, pleasure and frustration from very early on… Even a light trawl of the mighty internet delivers the Roman poet Catullus with this brief paragraph: ‘The boat you see there, friends, says that she’s been the fastest piece of timber ever seen. She swears that once she could have overhauled all rival boats, whether the challenge called for racing under canvas or with oars…’ Very little is truly new.

From there this was introduced into England by, among others, King Charles II. In 1661 a certain John Evelyn recorded a wager between Katherine and Anne, two large sailing vessels both of English design, ‘…to race from Greenwich to Gravesend and back’. One of the vessels was owned, and sometimes steered, by King Charles II. The king lost his bet this time.

As yacht design became more diverse it was necessary to establish systems of measurements and time allowances. Therefore ‘in the interests of fairness’ in the 1820s a primitive system of time allowance was introduced on the Solent. And with that the arguing about fair handicapping started… since when of course it has never stopped. As a result one-design competition developed and later on today’s box rules, and so on.

When you sift through the current rules it is like reading a history book. All the clever ideas that once were judged to need a ban, a rule patch, or the opposite, as in making a new accommodation, have seen the rules grow ever longer and ever harder and more complex to digest.

Some ideas, judged at the time as clever, have not survived to the 21st century. A few still have a place in some rules and again not in others. I remember a discussion in 2012 about jibs with more than one clew, a quadrilateral code-0 type sail that Hugh Welbourn had recently reinvented. I remember a rule in IMS about not permitting two jibs in a luff groove device unless changing sails: ‘No jib may be set in conjunction with any other sail so as by any means to simulate a double clewed or double luffed jib.’ Still present in PHRF and indeed in the TP52 Rule!

A complication is the choice to combine various rules, like RRS, ERS, OSR with the class and event specific rules. All great stuff for those with an interest in rules, a good memory and possibly who are more fond of reading than of sailing. It is the only way to come to some kind of standardisation in the rules that govern our racing, but it can drive you mad as these rules never stop changing… and then it becomes ‘spot the mistakes’ in your class or event regulation.

Rules that set a limit attract us all to go to that limit. A great way to steer choices and behaviour. In sport we are addicted to limits and quite a large percentage of us are addicted to trespassing limits to the point where penalties kick in. Much to the frustration of those who like to play it clean, but exciting to the ones who like to push things to the very edge.

As the shift continues towards an ever-increasing proportion of the users of the rules of yachting not being native English speakers, an effort should be made to accommodate a better level of knowledge of the English language in official documents – instead of seeing an avoidable lack of understanding as ‘tough luck’ or ‘part of the fun’. An attitude that I feel is only slowly changing.

Ideally, you should not need a lawyer or a rules expert to understand what is being said. I know it is not that simple, but I also sometimes get the feeling that the complexity in our rules is a goal in itself, as in a self-perpetuating bureaucracy. Keep it simple, please… That is, if the aim is to have the main competition on the water. Not always sure about that.

In a few days we will have concluded another Mapfre Copa del Rey here in Palma. It is the King’s Cup that will of course be presented at the end of the six-day battle of Palma by the new king of Spain, Felipe VI. 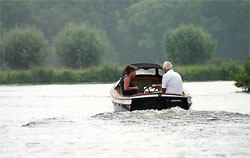 One of the Copa del Rey trophies is for the Barclays 52 Super Series division. Like his father, Juan Carlos I, King Felipe VI is an avid sailor and he will helm the TP52 Aifos at the event that carries his name. Juan Carlos I was instrumental in getting TP52 racing to Spain and Europe back in 2005. He is an Honorary Member of the TP52 class, together with his longtime sailing friend José Cusi. It is only a few years ago that both men were still active racing their TP52 Bribon and yet it seems a long time ago.

Thank you both for the many years of support and a warm welcome to King Felipe VI. Try to sail as much as you can, your majesty; the many images of you enjoying your sailing will certainly stimulate others to compete and also help to generate support for our sport. But the most important thing of course is that you enjoy being out on the water with friends.

Aim to win the cup that bears your name. The TP52 class members will be there to make it hard to win but for sure they will applaud you if you are successful or not.