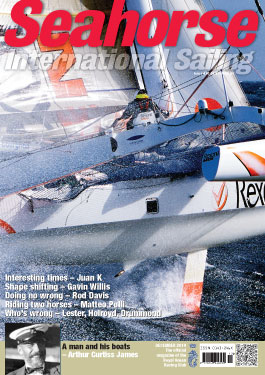 Got there
YVAN ZEDDA

New discipline new audience
Things are moving as details are developed for the introduction of offshore racing at Paris 2024. MATT SHEAHAN

Rotation is the key
The extra degree of freedom given to the foils in the latest Imoca rule may make these boats competitive inshore as well. JUAN KOUYOUMDJIAN

A man and his boats
When US railroad and automobile tycoon ARTHUR CURTISS JAMES decided to learn to sail he found just the boat. ROGER VAUGHAN

Shifter
Forget foils, why not trim the hull as well? GAVIN WILLIS and GRAHAM CAMM

No turning back
Foils may indeed be everywhere but the story began at the turn of the last century, not the current one. BRIAN HANCOCK

A rare beast indeed
The success out of the box of the Italia 11.98 Sugar winning this year’s ORC Worlds was impressive. And you can sleep on it too. MATTEO POLLI

(Almost) a clean sheet of paper

ORC – Potted history
We are not the only ones to be celebrating 50 years’ continuous service. NICOLA SIRONI

And the fat lady sang
When the TP52 Super Series fleet gathered in Porto Cervo they were faced with a surprise new force majeure. ANDI ROBERTSON

Sailor of the Month
And the fight moves to the east