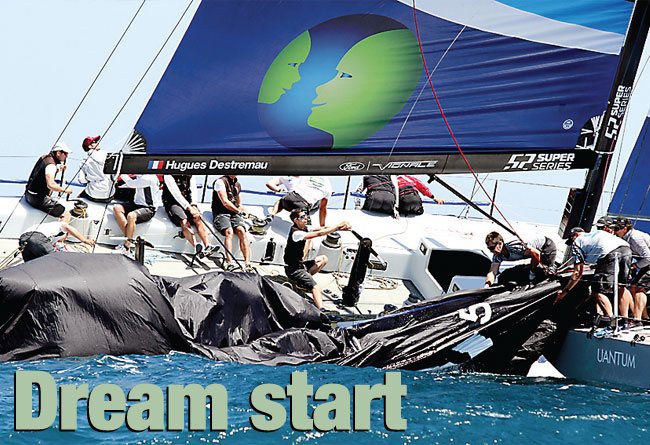 Eight brand new custom-built grand prix racers (and one 2014-turbo) went to the line in Valencia. ROB WEILAND has plenty to be proud about

We did it! That was the consensus among owners as they had their first sight of 12 TP52s berthed in front of the Veles e Vents building in Valencia. Nine brand new TP52s and all 12 boats optimised to the latest class rule.

To order any racing yacht is a big step and a very personal one. To share this step with eight others at this size of boat is unique. On the one hand, it reduces the chance that for a short while at least you have the best boat within the group; on the other hand, with so much effort and talent all working on improving these boats you know that as a group you make steps that are near impossible to achieve building a pure one-off. As the results history of the TP52 shows.

Wherever they go and wherever they race after their class racing is done, under whatever rating rule, these boats do well. We then are talking about racing boats that are on average four years old when starting their second life. When most one-offs are past their peak and no longer considered competitive.

Against that backdrop the TP52 box acts as an incentive to get the best out of design, construction and management as much as it does to limit creativity and performance. The trick of course is to keep moving the box with time, development and new ideas. This you can only do on the basis of consent among owners and regular advice from the best expertise yacht racing has to offer.

The best in the business have to take a genuine interest. And they do. Hence why not just the owners had a good feeling looking at the boats but also all the sailors. After all the talking, the staring at drawings, the processing of the parts, finally a first peek at the result of all the efforts. ‘We did it’ is what it came down to. Straightaway to be followed by let’s go and try this out. Let’s go racing.

And for racing Valencia is perfect. We all know that, but as if to help or to show support, it was more than perfect for our first event of 2015. The breeze kicked in every day, it was sunny but not too hot, crisp spring conditions, not too much nor too little breeze, great for getting new boats out and ticking off the boxes.

Yes, there were the tried and tested early launches, like Alegre, Azzurra and Quantum, and there were the late ones, launched only days before the event, like Bronenosec. Yes, there were the tried and tested teams, like Alegre, Azzurra, Paprec and Sled, teams with a few new faces like Gladiator, Interlodge, Provezza, Rán, Quantum and Xio, and new teams like Bronenosec and Platoon. Owners new to the TP52, like Andy Soriano (Alegre) and Vladimir Liubomirov (Bronenosec), and those who have been with us for 10 years like Alberto Roemmers and Doug DeVos.

Did this variance show in the results? No, not really. If anything you could say that Alegre’s planning and preparation paid off… but then you probably are being a bit unfair to John Kostecki (tactics) and Kelvin Harrap (strategy) who hooked up with the conditions to finish second overall with this new Botín design.

Meanwhile, Niklas Zennström, with quite a few new faces onboard, including Morgan Larson (tactics) and Adam Beashel (strategy), had one weaker day and four very strong ones to take a welldeserved event win on their latest Vrolijk design. Third was Sled, third TP52 for Takashi Okura and an experienced team based around a few giants of the current era: Ross McDonald (tactics), Hamish Pepper (strategy), Don Cowie (mainsheet) and Robbie Naismith (upwind trim). It took Sled just one ‘average’ day to get going.

So only owner-drivers on the podium, another surprise. Of course with 75 per cent owner-drivers in 2015 the chances are increased of seeing them on the stage; but this outcome should also reassure those who still have mixed feelings about racing against pro drivers.

First of these pro drivers was Guillermo Parada, defending the Azzurra colours, in fourth place tied on points with Bronenosec for fifth… Vladimir Liubomirov showing you can do well with hardly any practice. New boat, new team, new to the class, new to the Super Series. Then again Vladimir is not short of time on the helm as he races in quite a few classes. Still, credit to the team with Michele Ivaldi (tactics) and Cameron Dunn (strategy) to pull this off.

All the race wins were taken by the top five overall, while some others were not yet fully in phase or simply had problems getting off this year’s more crowded startlines. But all showed potential.

The 2015 Super Series has just started and conditions will vary greatly from what we had in Valencia. Quantum ‘out of position’ in sixth, fighting hard but too often in the middle of the fleet. Platoon and Provezza, both unusually spending a lot of time in the second half of the fleet. Interlodge either at the front or the back… with just one mid-fleet finish (Interlodge only raced this one event with us. Austin Fragomen has sold his boat to Steve Benjamin and so she will be the new Spookie).

Paprec showed good speed, an amateur crew who are now the old salts of the class. Gladiator, stunning boat, had hardly sailed before racing started. Xio, the ex-Quantum 2011, was also racing for the first time with a new crew and was not yet fully optimised to the 2015 Rule. Red lantern for now, only one way to go… up.

But the results never tell how good or close the racing is. Best way to find out is to come and watch an event, but second best is to follow the racing on 52superseries.com. Live tracking, live commentary plus good videos and photos by our media team give a nice reminder of just how great proper grand prix racing can be.

General comment on the dock is that the new boats are ‘much’ quicker than the 2014 TP52s. Upwind as well as down. Downwind the new, lighter boats with more sail area are easier to accelerate, even while crews are still learning the best angles.

With the gains in windage, sail efficiency, lower vcg and rig stiffness and visibly better hull shapes it would not surprise me if the 2015 TP52 continues to be a very good option in IRC or ORCi. Theoretically they are possibly a bit too fast for racing under those rules, but as we all know – and as history proves – speed remains king. And of course it is not difficult to rein in a bit on sail area or make a boat heavier.

But all that is for much later. First enjoy a few years of true sport, boat-for-boat racing at its very best. Crew and fleet racing skills tested in 50 races over five events. With 11 races done the fun has just begun. Next is Porto Cervo and then as you read this we are heading for the TP52 World Championship in Portals.
Rob Weiland, TP52 class manager