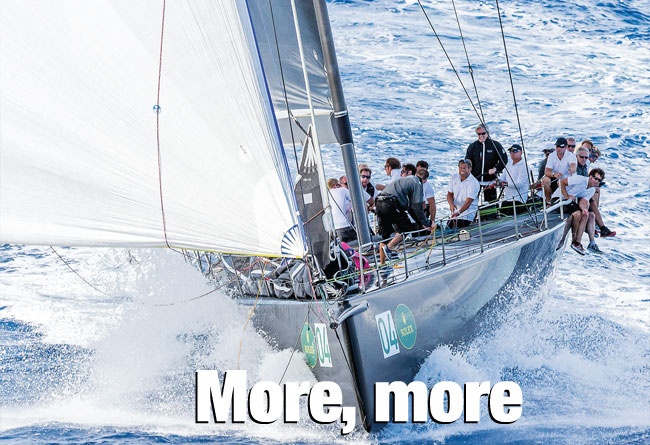 Seahorse: The end of yet another season…

Rob Weiland: Yes, it is amazing to look back on 45 years of sailing and being involved with boats in all kind of ways. From the steel ketch that I learned to sail on to the machines that seem so normal today has been quite an evolution. One can only wonder how boats will look 50 years from now.

From the TP52 point of view we have now achieved the full extent of the rule modification that the class members and I set out to achieve in early 2008. Step by step we modified the IMS-inspired 2007 TP52 to the racer that we will see in 2015. Cleaner than clean, both on-deck and inside, and even more ‘fast is fun’ instead of following rating idiosyncrasies as when the class first started. Using modern technology and modern materials without becoming a floating experiment instead of a reliable racer, leaving room to play in design and construction without making that the primary goal. Racing comes first.

SH: It has been good to see the older TPs able to track the modifications and compete with newer boats over the years. Will that still be the case in 2015?

RW: I feel it will, but there comes an end to life at the top… also for boats. There is a cut-off from the money point of view once it becomes more attractive to buy a more recent model than to spend yet more on keeping an existing boat functioning.

You also have to appreciate that it requires the co-operation of the owners of the new boats to make the older boats competitive, in the sense that they permit the older ones to modify outside the TP52 box rule. Actually, that worked better than any of us foresaw. Especially making the boats lighter was greeted with scepticism, in the sense that the hull shapes are not the optimum for a given displacement, but one tends to forget there are many roads to Rome, many ways to speed up a boat.

For sure, it gets more difficult from 2015, as the new boats touch what now look like some genuine boundaries in key components such as displacement, draft and sail area. I guess the reality will be that we will see very few boats from 2009 or before joining in the class racing from 2015. Which means there will be about 18 boats worldwide that fit the TP52 class racing bill. I hope this number grows to about 25 within around two years from now. Then the pool of boats will be big enough to sustain at least half that number to race each other on a regular basis.

SH: And now you are also joining the newly founded Maxi 72 Class as its class manager…

RW: For my sins, I am. The Mini Maxi owners feel it is time to firm up their identity and get more control over their racing by founding a class association. Then you need a manager. Why not me? Easy decision, a lot of work. The decision to start a class is marked by changing the name from Mini Maxi to Maxi 72.

The International Maxi Association (IMA) more and more seems to become an umbrella organisation for all kinds of maxi racing and as such, in my opinion, has a solid future. The fragmented maxi sailing world needs a meeting point as well as direction and streamlining. The Wally Class, J/Class and now the Maxi 72 Class. Superyachts having specific rules and racing. I like to stress that the owners of the 72s strongly support remaining under the IMA umbrella as IMA members as well as Maxi 72 members. It is an important signal to send out. The maxi world is amazingly versatile. From Mini Maxi cruiser-racers to superyachts, it exhibits a wide variety in racing ambitions and requirements. It is easy to see the potential for successful cooperation as well as for a fragmented mess. IMA secretary general Andrew McIrvine has his work cut out, that’s for sure.

SH: It puts you back in the area of sailing that you escaped with the TP52 class: handicap racing, rating and measuring issues… and owner-driver rules?

RW: Every advantage has its disadvantage, a famous Dutch ‘philosopher’, our soccer hero Johan Cruyff, is known to have said. I spend most of my sailing life trying to understand rating rules, trying to be cleverer than the rule authorities and all that. And here I am, on the gamekeeper’s side.

Sure, it can be a silly game. If you dive into the politics behind it, it is silly. But if you look at the resulting boats there is not much silly about those. The Maxi 72s are simply gorgeous. Powerful is an understatement and the level of detail is mouthwatering if you are as mad as I am about putting together efficient racing machines.

Make no mistake, this is deep-pocket racing, so only for the happy few. But it is not showboating. It is real racing, requiring a deep knowledge of our sport in all its facets, a small army of super-fit sailors who enjoy operating as a team, plus solid planning… so proper management.

I think the Maxi 72 Class is a good move, it will lead to growth in the number of 72s in the years to come. And it will lead to the 72s being in demand, so a secondhand market. I hope it will also lead to the boats racing each other more regularly, so bigger starts of 72s at more events than we see now. 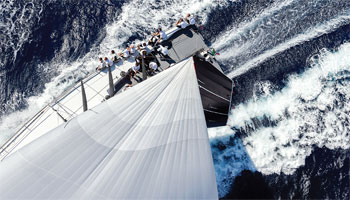 Their choice of boat, a pure one-off, already shows that these are not owners who will easily accept going in the same direction all the time. Some prefer to race offshore, like the Fastnet, Bermuda Race or Sydney-Hobart. Some prefer windwardleeward racing and are perfectly happy to race just in the Med. Between Voiles de St Tropez and the Sydney-Hobart there are a lot of options; it will be interesting to see how the class develops.

For sure, a versatile boat is needed, able to race inshore and offshore. We agreed on the class bylaws recently, the constitution. Next step is the class rule. It won’t be that different from what is in place already but it is efficient to have a rule that is dedicated to just the 72s instead of to all maxis, and it is necessary to put dots on a few ‘i’s.

The main thing, apart from the venue scheduling, is to uphold the rules in a pleasant but firm way. For that you have to be there when the boats race and be in touch with what goes on. As for the venues, one venue is sacred: the annual Maxi 72 Worlds in Porto Cervo. That is where all Maxi 72s meet and where the best owner-driver is crowned world champion. This year we saw a well-deserved win by Andy Soriano and the Alegre team.

RW: I hope my girlfriend does not read Seahorse, it is going to be a tour de force. The Maxi 72s race three events in the US and Caribbean: Key West Race Week, RORC Caribbean 600 and Voiles de St Barth. The first outing of the new TPs will be at Palma Vela, followed by the first 52 Super Series venue in Valencia third week of May. Fourth week of May we have five Maxi 72s at Menorca Maxi and some of these go from there to join the Giraglia.

The Super Series June venue is the Week of the Straits in Porto Cervo, followed by venue three in July: the TP52 Worlds in Puerto Portals. Four Maxi 72s will join the UK triple of RYS Bicentennial, Cowes Week and Fastnet, which has in the middle of it Super Series venue four… Copa del Rey. By then we are in August and gearing up for the early September Maxi 72 Worlds in Porto Cervo, where I hope to see eight 72s at the start! The final Super Series venue is Cascais. Then more or less four months at home in the office before the 2016 season knocks on the door…

RW: You are pushing it, Andrew… I’ll go for 15 TP52s racing a season that I hope covers both sides of the Atlantic and, slightly more of a gamble, 10 Maxi 72s in Sept - ember 2016 at the Porto Cervo Maxi 72 Worlds. That would make this class manager happy. By then if I look at the larger picture I also hope to see the positive consequences of the streamlining of racing calendars and rating systems, as well as applying some fresh logic to the ‘positioning’ of the various racing classes, creating enough confidence for more owners to build new and join what is on the racing menu.

Sounds funny maybe, with apparently so many events on that menu, but it is still hard to put together a good calendar based upon the key criteria of good sailing conditions, an interesting mix of racecourses, good race management and ample highlevel competition. Pretty soon you have to travel a lot, or race the same venues each year, which is not perfect either.

In that sense it would be nice to see a few more truly international high-level competition events, either new or revived. Yes, the Admiral’s Cup, for instance. But to a modern format. Nobody is going to spend three weeks at one venue any more, not even with sun and wind guaranteed. Today we live in the fast lane…

Rob Weiland was talking to the editor