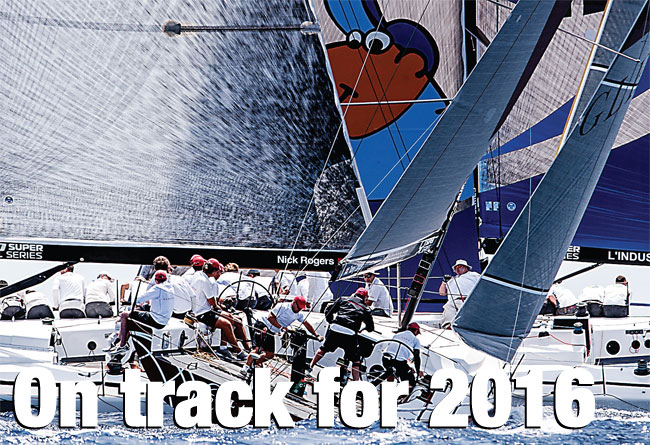 This Flintstone pushing his rock up the hill knows that one should try to enjoy that daily labour, no matter how futile. Do not connect happiness or success too closely with simply reaching the top. Not only will the rock inevitably roll back, but also that brief moment at the summit is not much of a victory if it brings little or no added value. Am I merely tweaking the position of my own rock, day in day out, or am I actually doing something worthwhile?

At the end of the Royal Cup Marina Ibiza, after the prizegiving, at the bar with those who raced at the event and those who worked to make it happen there was one moment I really enjoyed. Such was the intensity of a week of light-weather racing, no matter whether one was competing or organising, that all present seemed to suddenly realise for the first time what a great week they had just had in a wonderful location. With the right and fair outcome, the best team (Quantum Racing) won and all behind finished as they deserved. To see the smiling faces around me, many of which I have known for many years, created a wonderful moment. It all seemed worthwhile.

Tony Langley and crew, guided around the track by tactician Chris Larson, took their best place ever (second overall and the best owner-driver) with their 52 Gladiator (ex-Artemis 2009) now in its fifth season. Paprec (ex-Artemis 2007, now owned by Jean-Luc Petithuguenin, eighth in the event) joined us for the first time this year; this is the oldest boat in the Super Series, followed by Provezza (ex-Desafío 2008, now owned by Ergin Imre, fifth in the event). But each and every one of our boats has been optimised in such a way that they rate the same – old or new.

In Ibiza the three owners of the 52 Super Series itself sat down and agreed to continue their support for another three years. So from 2014 to 2016 we continue to push this pretty rock up the hill for sure. A formidable commitment, rare in our sport.

And they will not just continue to fund the series but also have each committed to building a new TP52 for 2015; which it is hoped will encourage further new builds using the same tooling plus the chance to move their existing boats on to new owners who commit to joining the 2015 Super Series. This pledge should be enough to give others, interested in our quality and style of racing but not totally convinced we would survive the demise of the MedCup, the certainty that the 52 Super Series is here to stay and will very likely grow and improve.

To enhance the quality of our racing and stay in tune with where we feel yacht racing will go in the five years following 2015 the TP52 Class Rule will once more be modified to produce a racing yacht that is even faster, better looking and more fun than the current version. Then from 2015 to 2020 there will be no more big changes, just simple rule ‘maintenance’. Time to get onboard.

Furthermore, the rule will be modified in such a way that the deck and cockpit will become even more efficient and will look even racier than on existing boats. For 2014 it will be possible to build to these numbers, but the 2014 boat will be reined in for that year keeping draft, displacement and righting moment on a par with existing boats.

Then come 2015 and the existing 52 Super Series boats can be adapted to match the latest new builds with surprising ease. Certainly the boats that were built between 2009 and 2012, once brought up to the newest numbers, will still be competitive and at a reasonable cost. We have written the new rule to keep the upgrade, excluding new sails, to no more than 100K euros. Some of the 2007 or 2008 boats that might still be around can also upgrade, but with a more dramatic adjustment in draft.

You have to remember that there is surely no precedent anywhere for a seven or eightyear- old one-off racing yacht still being competitive at the highest level?

The 52 Super Series is now heading for Palma and the Copa del Rey. There we will have nine or ten 52s on our startline. A very encouraging number. By the time you read this the results will be known and the teams will be on their way to Porto Cervo to compete in the Settimana Delle Bocche, the Week of the Straits. We will also shortly confirm our 2014 Super Series calendar, again made up of six events shared out between Florida and the Med.

Also this year the 52s have continued to do well in other events, racing boat for boat and on handicap, under both ORCi and IRC. In Ancona, after the dust settled, three 52s filled the podium at the 2013 ORCi worlds. Due to some poor communication the event used a rating ceiling too slow for a 52 in normal trim; however, three keen owners butchered their pride and joy and slowed them down by filling the bilge with lead to race 500kg above design weight… also slightly reducing their sail area!

They were generously rewarded with the top three places overall. Nevertheless, ORC and the event organisation should have been more alert to what was going on, with the expense of lifting these boats out of their optimum trim for just one event. But well done Hurakan, Aniene and Enfant Terrible!